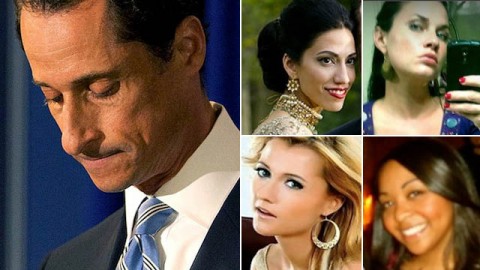 New York congressman Anthony Weiner resigned in disgrace a full year ago, admitting to having sent lewd photos to female fans of his on Twitter.

But for one corner of the Internet, Weinergate is very much not over. A group of liberal bloggers believe that Anthony Weiner was blackmailed by Andrew Breitbart into a false confession, and are carrying out a lonely Twitter crusade to spread their theory — in spite of the fact that Weiner himself has never claimed this to be the case.

Even Weiner’s constituents didn’t want him to resign, but because we are a “Christian Nation”, the fainting-couch faithful (and Pelosi) got their way. He sent dick pix people. Get over it.

Steve in Manhattan
9:00 am • Sunday • May 27, 2012
comment »
Choose Your Delusion
Artomatic for the People Different Wiener, Pretty Much the Same Story
7 Comments
ManchuCandidate

Sorry truthers, the truth sucks. Weiner’s been cut and there’s nothing you can do to bring him back up again no matter how hard you pump this story.

New another weiner-gate brewing in new mexico. no pictures of weiners, just hookers with a weiner.

It wasn’t the Cock, it was the Cover-Up. If Weiner hadn’t spent the first week lying through his teeth, things might have turned out different.

@nojo: It’s always about the cock, ultimately. For good or ill, human history is about the visable appendage. Ask any of the Stinquettes.

Not that that’s a good thing…

@nojo: Not after Chris Lee.

No, it was about the probably aftermath.

Tumescent Tony would have to bear listening to women hired by Breitbart’s website at his press conferences show up and scream, “Tony, show us your dick!”

It would never end.