Meet Dorli Rainey, age 84, shortly after being pepper sprayed at Occupy Seattle. Since she’s a senior citizen, I bet she votes, so she can’t get shit on that front. But I’m sure the MSM will find a way to mock and marginalize her, too. 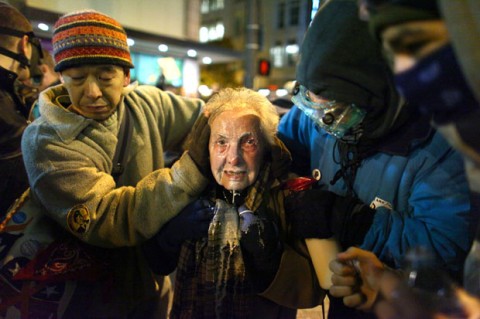 “You either comply with the orders from the police or you pay the consequences,” one Business Insider reader wrote in the site’s comments. “Granny was taught that before most of us were even born.”

“She got what she expected to get, and I for one hope they use batons next time,” a Slog reader wrote.

@JNOV will never finish this fucking sweater!: Yeah, pretty much.

ADD: Update – Police Chief meets with her after the photo goes around the world and Stephen Colbert mocks the Seattle P.D. They managed to pepper spray a priest and a pregnant woman too.

@SanFranLefty: We’re living in a police state and there’s a good segment of the brainwashed American public who get off on authority beating and torturing people. How did we get to this point?

I am going to say something heretical and might be OT, but I think it might be indicative of living in a police state. But every time there is a police officer killed in the line of duty, the local media go way, way overboard, in my opinion, in their coverage. I respect the good members of law enforcement, and I know quite a few, who put their lives in the line of fire everyday. There should be respect given to those who do their job in a good way, and sacrifice themselves for others. But the TV makes it seem like the officer died on a cross and devote days of coverage to the funeral, the grieving comrades and grieving families. In the same sullen, emotive way. And this goes on for days. Is this a Southern thing or is this something local teevee does nationwide?

@rptrcub: It’s like that here in TX as well, but since this is a military town, the soldiers are treated with the same amount of reverence as the police.

Which I find irksome because the guy who went into the military because his parents kicked him off the sofa, and ends up stuck on a cushy base, doesn’t deserve the same treatment as someone who wanted to enlist and risks his/her life every day on the front line in some country they’d never heard of before high school.

And I’m quite sure “Granny” understands the distinction between law enforcement officials and protestors who are exercising their First Amendment rights. And whoever mentioned putting a baton to Granny’s head: WTF is wrong with your life, that you could be so callous?

@matador1015: the cops here on rocky top harass people walking down the strip (cumberland avenue) before and after UT football games for drinking beer in a cup, sometimes resulting in arrests. yet they let the tailgaters in expensive parking areas on an allegedly dry campus drink openly all they like. one game, me and two friends were at a bar before the game. i always power slam 2-3 beers while we’re paying the tab. my friends on the other hand get one to go in a plastic cup. the 3 of us proceeded to the stadium, they with beers in hand. a cop stopped us and started harassing my friends about their open beers and making threats of arrest. one of my friends was a lifer marine and a very high ranked NCO. he whipped out his military ID and told the cop his rank. that cop sprang to attention from years of obvious military training. my friend noticed the reaction and started giving the cop orders to in essence return to his post as all was under control here. the cop did. he apologized to us and left. that was the coolest thing i had ever seen. i asked my friend how i could get one of those IDs.

@jwmcsame: Excellent. I wasn’t a high-ranking NCO, but when you enlist in the military, you agree to do whatever time active, and once you’re done, they can recall you for eight years minus your active duty service (inactive reserves, we’re called, and I think they’ve extended the inactive period because of teh warz). I’m assuming your friend retired, so he shouldn’t be recalled ever.

Anyway, I was hiiiiiiiiiiiiiiiiiiiigh one March 18th morn, so we were sleeping in my car, parked on the street, hallucinating to Kasmir and shit. We had the engine running because it was cold in Margate, but otherwise, we were just hallucinating away and sleeping and just generally like, “That porkroll on that hamburger was GOOD!”

A cop rolled up on us, and rapped on my window. After the pink and purple eighth notes stopped floating around the car, I pulled out my driver’s license and also “accidentally” handed him my inactive reserves card. He was like, “You’ve been here for an hour, and it’s time to go home.” I think I might have hit 3 MPH on the way to Brigantine. That card came in handy for sure.

@jwmcsame: “These are not the drunks you are looking for.” /Jedi hand wave