Stinque
Home Latest Comments Log in
If it smells, we’re on it.
Stinque
Fixing a hole where the reign got in.
Y'Obama

A Legion of Photoshoppers Awaits 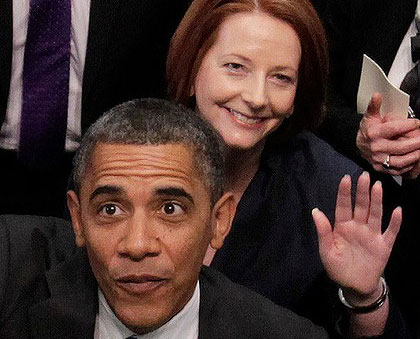 Where’s the Aussie PM’s other hand?

Looks like the Prez got some thunder down under.

nfl.com for highlights (such as) and analysis.

Per my buddies down there, the Kiwi media is P-I-S-S-E-D that Black Eagle dissed them to spend days upon days with the Aussies. Wellington has awesome food and coffee, the P.M. of New Zed issued an open invite to Obama three years ago, and there was no love. It’s like a one hour flight from Sydney on Qantas or Air New Zealand. I bet he could have taken the girls to see a sneak peak of The Hobbit for crying out loud.

Is that Jodi Foster?

Wellllllll, technically it’s an Australian base, that the Marines get to use. It’s about the size of Holland. Which doesn’t help me, as I have no frigging idea how big Holland is. But still I suppose it makes sense to someone.

I think it’s Oprah’s fault. What after her big tour down-under someone in the Pentagon said “Yeah, lets send our guys down there for a change of scenery”.

But my big worry is that after a session on the turps, some bright digger will dare a marine to wrestle a croc.

It’s unusual in as much Australian law applies to Australian bases, and the usual situation is US law applies on US bases AFAIK. So the usual guffaw about bringing miscreants to justice (see Japan) may not apply.

@JNOV: Now that you mention it, She does have a bit of Jodie about her…

Beat me to it… my first thought, also.

@redmanlaw: bob davie new head coach at new mexico. not leach, but name recognition. he was always competitive at notre dame. gotta see what kinda staff he puts together.

@jwmcsame: Davie (not of the Kinks Davies, so far as we know) had huge advantages at Our Lady that he does not have at New Mexico: a talent pool, people who were committed to play for the glory and tradition of the school, and a rabid/national fan base.

UNM offers none of that to the new coach. Who wants to play at New Mexico, the worst D 1 team in US America? Guys who the former and current interim coach have accused of giving up. Even I can see the fear in the eyes of the defensive linemen in my 8-24x Nikon binoculars as they face off with Texas Tech. You play at UNM when fucking Panhandle State won’t take you. Also, Lobo fans don’t give a fuck about football. It’s a basketball school and Albuquerque’s a basketball town.

I see this move by Davie as a way to get his name back out there in order to get a job in some capacity, perhaps not as a head coach, at a decent program after ten years in TV. There’s another issue – Davie has had no direct contact with the current generation of players after a decade in the ESPN cocoon. I’ll be surprised if he can push Locksley’s slugs to three wins next year. Practice those “it’s a long process but we’re here to win in the long run” quotes, coach.

/feeling like Mr. Analyst after picking the Broncos last night by as much as a TD.

JNOV • Noon, January 20, 2021 Today I didn't awaken with a start. I'm still having some panic attacks, though. Today was…

¡ANDREW! • Noon, January 20, 2021 They really should stop with that annoying “peaceful transfer of power” bullshit, unless…