Chris Christie Still Not Running for President, Despite the Awesome Graphic We Had Ready Last Night 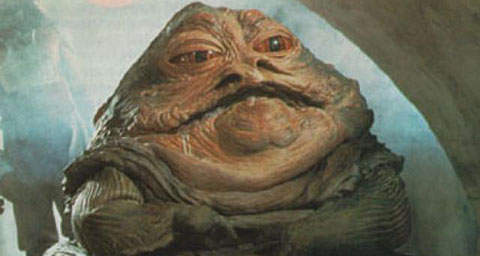 At 6 pm PT, Rachel kindly informed us that Chris Christie was embarking upon a Big Speech that would — well, might — blow the lid off the 2012 race for the most mind-blowing GOP collapse since Goldwater. (Yes, we’re sticking with that line. Yoda Pez is out of town, and unable to restrain us.) By 6:55 pm, our hopes were cruelly dashed.

But not before we had everything ready to launch. And since the rest of the news sucks — have the democratic Wall Street protesters democratically decided on a democratic response to democratically being maced? — we’re going to dwell in an alternate universe where Christie did jump in, and the next week would be filled with as many Jabba the Hutt images as we could muster.

There’s lots of other candidates who are… um… smart?… rational?… not a gigantic asshole?… sane?

The GOP has a problem – they don’t know whose turn it is. Reagan had to wait for Ford. Later is was Bush’s turn, then Dole’s, then the Boy King’s, then McLame’s.

At work, and it’s a major achievment that I have the internet at my desk. That’s how my life’s going.