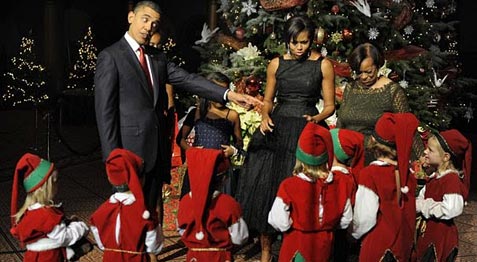 So, about last night… Here’s all you need to know:

Reid and McConnell are now negotiating the terms of a short-term spending bill that can pass unanimously, punting the issue of federal funding into next year when the Republican House will likely demand significant spending cuts.

In other words, if you’re looking forward to a replay of the 1995 Clinton-Gingrich Rumble in the Jungle, time to start stocking up your Netflix queue instead: The 112th Congress hasn’t even begun, and already Democrats are scrambling in fear of a threatened government shutdown.

What failed last night because of shocking! Republican intransigence was the bog-standard annual spending bill, a $1.1 trillion cornucopia festooned with earmarks from both parties, but still meeting Mitch the Turtle’s budget target. (Democrats are adorable for taking Republicans at their word!)

The bill failed — with a majority, of course, because that’s what the Founders wanted.

Faced with that failure — with the Republican insistence on cutting off the government’s allowance — Harry Reid, with The Preznit’s blessing, could have granted the point, congratulated Republicans on their historic victory, and let the government come to a screeching halt now, because it’s very impious to even think of working when the Baby Jesus is celebrating a pagan anniversary.

But no, after being mugged on the Senate floor, he’s working with the mugger to devise a plan that will make the next mugging even easier.

What did Barry say the other day about standing up to Republicans? Honestly, we don’t remember. There’s already too much useless trivia rattling inside our head.

When your team is made up of folks like Nelson, Lieberman, Bayh, Lincoln and Reid, it’s not hard to turn turtle.

Like this post, Fearless Leader. “Let me explain. No — there is too much. Let me sum up.”

Tomorrow is when Scott Brown, Olympia Snowe and Susan Collins pull the rug out from under DADT again. Not official, but you know it’s coming. And thus you will see Joe Lieberman —

Waitaminnit: is Joe even going to be there for the cloture vote, on account of God? The mind reels.

Why does this make me picture a three-ring circus featuring a clown car?

I almost fell out of my chair at the “we won’t address unrelated things in one bill” bit. *Slightly* ironic coming from the party that gave us, “vote for these slashed science budgets or you support pr0nz0rs at work”.

@chicago bureau: I’m sick of these whining babies who can’t make it to work because of Yahweh, or Baby Jesus, or Xmas shopping. OR Sen Ron Wyden has been diagnosed with cancer, but he’s staying to vote on DADT and DREAM. He (and our other senator, Merkley) were two of the lonely but brave 19 votes against the tax bill.