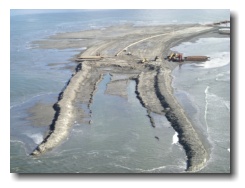 Remember when the BP oil spill was being touted as “Barack Obama’s Katrina“? Despite the fact that Coast Guard vessels were on site working the spill from day one, and the Federal government mobilized heavily to contain the disaster, partisan critics of the Obama Administration insisted that not enough was being done to prevent oil from reaching Lousiana shores. And because it is an article of faith among the news media that every instance of Republican incompetence, corruption or greed must be counterbalanced by a corresponding incidence of Democratic incompetence, corruption or greed much of the new media and the chattering classes seemed perfectly happy to go along with the idea that the BP oil spill was, indeed, “Barack Obama’s Katrina.” Of course, to sucessfully argue this point it was necessary to show that there were effective countermeasures available that the administration, either through sloth or incompetence, was failing to implement. Enter Lousiana Governor Bobby Jindal. Always ready to savage the government for doing too much useless volcano monitoring, Jindall took to the airwaves to denounce the administration for not doing enough useful berm building. Berms, we were told over and over again, were the immediate, desperately needed, effective solution to the oil spill problem that the Administration was, for inexplicable reasons, failing to implement. There was only one little problem with this urgent claim: the experts disagreed. The building of berms, they told us, was an expensive way to accomplish very little. But never mind. All we heard from Jindall, the right-wing talks shows and much of the media was berms, berms, berms… and so under pressure from local legislators and the relentless, right-wing message machine, the Obama administration relented and pressured the Army Corps of Engineers to approve Jindal’s dubious project.

Well a post-spill report is out examining the effectiveness of the berms and guess what… the experts were right. The berms were very expensive at over $200 million dollars and counting, but ended up collecting almost no oil.

By October, about 10 miles of berms had been built several miles from the gulf coastline at a cost of $220 million, with construction paid for entirely by BP. Louisiana officials estimate that the berms stopped 1,000 barrels of oil from the spill.

By contrast, more than 800,000 barrels were captured at the wellhead, and roughly 270,000 barrels were burned off by Coast Guard vessels. Skimming operations recovered at least 34 million gallons of oil-water mixture.

“$220 million for a spill response measure that trapped not much more than 1,000 barrels of oil is not a compelling cost-benefit tradeoff,” the commission staff wrote.

On the plus size, Louisiana did manage to get free funding for miles and miles of berms that might potentially help stop coastline erosion. But this was certainly not the way the project was sold to the American people.

Makes that volcano monitoring look like a major bargain.

It’s win win. Jindal gets something that can be useful that his state government doesn’t have to pay for – and he gets to call Obama a wasteful fucking islamofacsist fucktard for paying for it.

BP footed the bill? It sets a bad precedent, to be sure, but I’m having a hard time getting worked up over it.

T/J for RML, showing my ignorance of Indian law: are businesses on the res exempt from usury laws? Check this out: http://www.westernsky.com/General/Rates.aspx

@Dodgerblue: What usury laws would those be?

@Dodgerblue: Damn. Those rates are in payday loan territory.