Finally, An Internet Protest We Can Get Behind 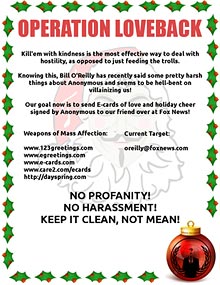 We’ve had some issues lately with actions taken against WikiLeaks opponents. Sure, it sounds like fun to take down the Visa and MasterCard public websites, but it does nothing to impede their operations (dudes, go after the authorization servers!), and it sets a bad example. Shouting down your opponents — which is what a “denial of service” attack amounts to — just makes you out to be a bunch of petulant hooligans.

Which is why we’re pleased to see that “Anonymous,” one of the more prominent ad hoc cyberprotest groups, is adopting a new tactic:

Bill O’Reilly has recently said some pretty harsh things about Anonymous and seems hell-bent on villainizing us!

Our goal now is to send E-cards of love and holiday cheer signed by Anonymous over to our friend at Fox News!

We’ll grant that in a practical sense, a “Weapon of Mass Affection” will have the same pipe-clogging effect as a raw packet attack against a website — and that O’Reilly probably never sees messages sent to oreilly@foxnews.com anyway.

But if you’re gonna engage in a meaningless protest, why not do it with style? If nothing else, you’ll get better press.

How about “Happy Holidays”… from Miley Cyrus?

Seriously, why does Billbo care about 18 year old celebutard females?

@ManchuCandidate: Do you really have to ask? I’ll bet he has 15 different Cathlolic Schoolgirl Uniforms in different sizes for when the “help” comes over.

Pssst…questions about the tubez in the sandbox….could especially use input of the more computer savvy among you.

Note that these stats only include passwords that were guessable via a dictionary attack (hashes are not “reversible”), so anybody with a particle of sense who used l33t or any of the standard strong PW generation techniques should be fine.

Question: I know what the standard bases are for a woman – 1st is kissing, 2nd is bewbs, etc. But what are the corresponding bases for a guy?

@TJ/ Jamie Sommers /TJ: I can’t help you with men’s bases, but I sure hope you’re planning to share the story that inspired this question if/when you get an answer.

@TJ/ Jamie Sommers /TJ: I think guys pretty much have only two bases — kissing and sex. I suppose you could differentiate between manual, oral and vaginal sex, but that’s chopping home plate into slivers and quibbling over which one you ran over when making a home run.

@IanJ: Fellow Stinquer to point out you neglected one crucial “sliver” in 3…2…

@al2o3cr: So I get three emails from LinkedIn this morning telling me my account’s been disabled and I need to change my password. Related to the Gawker break-in? Dunno.

Dunno, because (1) I used a different password for LinkedIn, and (2) I never use LinkedIn. Somebody snookered me into signing up years ago, and all I do is approve friend requests.

LinkedIn has temporarily disabled the accounts of any users whose e-mail addresses turned up in the public database of hacked accounts. It’s asking those users to reset their passowrds.

LinkedIn PR guy Hani Durzy says the move, which started yesterday afternoon, has only affected a “small fraction” of LinkedIn’s 85 million members. He says the social network made the decision proactively, not because it had any evidence that any accounts had been misused.

If anybody follows that lead, this could get interesting.

At least that is how I remember it from my glory days. Wow, we could really be assholes to each other…

Cue an EPIC outbreak of spear-phishing. All you’d need is the DB and a site that can *look* like LinkedIn, and now you’ve got (prolly) thousands of accounts.

@nojo: Me too, so I changed it. Our IT guys recommend KeePass for home use password protection, so I’ll try that.

@al2o3cr: I suspected that, but LinkedIn did it right: No links in the email itself, but a request to start from their homepage.

And yes, I did look at the raw code first…

We use KeePass in the office, and it seems to regularly corrupt it’s database for no reason. YMMV.

I highly recommend looking at 1Password, which is a great cross-platform solution. It’s a little pricey, but does other stuff like remember software licenses and bank account details (no more having to save CC info on dodgy sites). It’s on the MacUpdate bundle right now, so that may make it a better deal (if you’re on OSX and want any of the other apps).

@al2o3cr: I use Bento (i.e., Filemaker Lite), which isn’t a password manager as such, but is really handy for tracking the shit out of everything.

@nojo: I’m not that organized and never will be.

@flippin eck: Nothing that exciting. A friend was just asking if I slept with an ex and I was trying to explain how far I got but I couldn’t figure out if I got to second or third. Tommmcatt‘s handy guide doesn’t entirely apply to my team.