Stinque
Home Latest Comments Log in
If it smells, we’re on it.
Stinque
Mastodon: @stinque@mas.to
The 2010 Stinque Awards 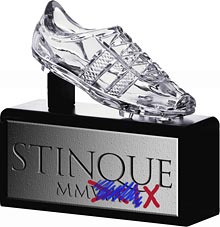 There’s an old rule in journalism that you can’t call an event “annual” until it reaches its third installment. Something about not taking organizers at their word, and waiting for actual results.

But since, to apply another ironclad rule, eighty percent of success is showing up, and we’ve somehow managed to show up three years running, we’re happy to announce — officially, mind you — the Third Annual Stinque Awards for Achievement in Infamy.

If you’re not familiar with the Stinque Awards, we’ve adopted a Unique Methodology that distinguishes us from the flood of blogfill other year-end awards clamoring for your attention: You do all the work!

We could spend all day on C-SPAN explaining the process, but we’ll cut to the chase: This week we seek suggestions for Categories and potential Nominees, from which we will arbitrarily select a handful for further consideration. Next Monday voting will commence, using a secure system provided by the U.S. Department of State that guarantees your confidentiality. Finally, on December 27, we will announce the winners in a painfully long ceremony that can only be accurately measured by reservoir levels during commercial breaks.

Winners receive our handsome Crystal Shoe in honor of Muntader al-Zaidi, who inspired the world in 2008 by Throwing Truth to Power. Because of an ordering snafu during our inaugural event our commitment to a Green World, we’re recycling our original statuettes until we can see the back of the storage unit again.

I look forward to this. The stupidity seems to leak out of my brain after a short time. It’s always good to have the Stinquers refreshing my memory. The one incident that stands out was the Rand Paul supporters tackling the female Move-On protester standing too close to the candidate’s SUV, then one guy proceeding to step on her head. Call it the 15 Yards Personal Foul for Excessive Celebration Award.

Harry Reid should be given the Peter Principle Award for
outstanding incompetence.

@Benedick: Good lord, isn’t it cold there? I’d work from bed in that kind of weather.

I’m nominating Beck for the “It sounded better in the original German” Iron Cross for Insane Conspiracy Theorizing.

BTW: ran across this decision via a reference on LG&M. I wonder if the Tenthers know just exactly what sort of evil shit they’re advocating for…

The Mr. Loopner “Slinky” award for Most Spineless Democrat

A hearty second for the Basil Fawlty Award for Most Obsequious Pundit.

Best Legislation from the Bench
Most Frivolous Lawsuit
Shortest and/or Most Obvious Trail when Following the Money
Most Hypocritical (with subcategories like Most Hypocritical Religious Leader, or Government Official, or Politician, as appropriate)

@Tommmcatt is with Karin Marie on This One:

hey
we were officially announced saturday.

There has been something lacking in previous editions. And so I suggest the Platinum Vuvuzela For Inexplicable Achievement Relating To Or Connected With Sport.

It’s a crowded field. Suggestions: Farve and his little friend and for sucking, Vancouver Olympic dudes for building a luge run that killed a guy and looking the other way, LeBron James for his announcement/informercial, the French soccerball team for going on strike because of unfair sucking conditions, Tony LaRussa and Albert Pujols for propping up Glenn Beck, Tiger Woods for a full year of AWESOMENESS, Norweigan curlers for those pants, and Cam Newton for blaming his pop and STILL taking the Stiffarm Trophy.

@chicago bureau: And Portugal on the ropes.

Richard M. Nixon award for the most egregious racial slurs.

@Tommmcatt is with Karin Marie on This One: I’m in a hotel in NYC. It is hell.

@IanJ: this has been a shit year for Yurp. Undoubtedly.

Ireland/Greece/Portugal almost implode, Iceland almost explodes, Spain almost has a Canadaesque secession crisis, and England has a worthless election leading to an orderly path to self-destruction.

And we haven’t even mentioned Poland yet.

Most Willful Ignorance of the U.S. Constitution While Invoking It

Can we do inanimate objects? Titanium Roadsign for State of the Year. SC, AZ, NY, CA and a couple others all can make bids.

@Dodgerblue: Kissenger is so cuddly, though. I vote Cheney.

@SanFranLefty:
“Furthermore, there is no statutory requirement that people possess cars, only a requirement that they have insurance as a condition of doing so. By contrast, the plaintiffs in the health care case argue that the new law requires people to obtain health insurance simply because they exist” (this a.m.’s NYT)
i see, we are cars without insurance now, if we choose to exist. nice.

twittered:
hey america!! if universal care is unconstitutional, you might want to look into updating it.

This qualifies for several categories:

“Mistakes and inattention or distractions cost Marines lives,” [Marine Corps Commandant Gen. James Amos] said on Tuesday, explaining how he came to his decision [on DADT]. “That’s the currency of this fight.

@mellbell: Don’t you look forward to a day when gays will be able to serve openly in the NFL?

@mellbell: WTF, he thinks that some Marine nicknamed Mary is going to sashay across the front lines of a gun battle in Falujah wearing nothing but a pink boa? Frankly, this line of B.S. argument insults the grunts as being so easily distracted or prone to make mistakes. I apparently think more highly of them as professionals able to focus on doing their jobs, than does their commander.

@SanFranLefty: Could “something that happened” in the POW camp make McCain all fucking weird on the gays serving in the military?

@redmanlaw: Honestly, I think he’s just too set in his ways to cede ground on this. I don’t get the same sense of squeamishness from him as from other repeal opponents — it’s more like “that’s just not done in the military I know and served.”

It is in the interest of my party not to let deviants serve in the armed forces. That way we can continue to use it as a stick with which to beat the Demoncrats and also to raise money. Same is true for the whole gay ‘marriage’ (ick) issue. Plus immigration. Taxes. Flag burning. Etc. If any of these issues ever get resolved it just cuts down on the revenue stream.

As a good Republican I am now going to go watch videos of gays getting married. At least I assume they’re married. Well anyway, they’re wrestling with each other which is pretty much the same thing.

By that logic, we clearly need to root out all the fundies. Can’t have Marines distracted by worrying about whether or not they’ll get Raptured, can we?