Quinn On The Breakaway…. 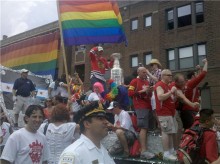 The high point for gays in the Land of Lincoln, so far this year, was having Brent Sopel bring the Stanley Cup (pictured) to the Gay Pride Parade in Chicago — the first time the Blackhawks made an appearance at the party.  But the bloom kind of came off that rose, as Sopel promptly departed for Atlanta, after a trade to the Thrashers.

It was a neat story, actually.  Sopel promised to go even after he learned he was on his way out — all in honor of Brendan Burke, an out hockey player (and son of Brian Burke, GM of the Toronto Maple Leafs and the U.S. Olympic Hockey Team), who died in a car crash in February.

But this is the second best moment, it seems, for those with a case of the gay in Illinois this year.  Moment No. 1 just might come tomorrow:

After waiting years for a political climate that would generate enough support, gay-rights activists won one of their biggest fights in history Tuesday when the Illinois house voted to allow civil unions for same-sex couples…. The legislation was approved by a 61-52 vote [and] now moves to the Senate, and a spokeswoman said it could be called for a final vote there Wednesday.

It’s taken me seven years, since I moved to Chicago, to say something this brash and bold.  And tomorrow, I just might be able to say…. suck it, Wisconsin.

My agent tell me that he and his Life-Partner-In-Sin spent time with a lawyer to try to fix up a way their vast wealth would be at least a little protected (in Florida) when one of them dies. Cost them $17,000 trying to be straight. As he said, “You suck dick, you pay.”

I still say that none of these state deals mean much of anything without federal recognition. They seem to me to be sideshows calculated to distract us from what’s really important and to give everyone a feel-good struggle they can get behind and produce donations all across our political spectrum from far-far-right to right of centre.

@Benedick: You feign concern about the raging “hung” versus “hanged” controversy and then you toss out a “centre” when you think no one is looking? For shame you unrepentant Limey. Next you’ll be trying to steer us all back to sticking extra u’s into words like color.

@Dave H: Some English spellings I refuse to change: centre, theatre, cheque. I only gave up on tyre under extreme pressure from big men holding power tools.

more on the land of Lincoln from the Illinois NORML site:

Potential SB1381 Vote this Week
Lawmakers will be returning to Springfield this week for the veto session. Medical cannabis patients and supporters once again will be in Springfield at the Capitol lobbying lawmakers to pass Senate Bill 1381. For those who cannot make it to Springfield please call your State Representative everyday this week and politely and kindly tell them to “Vote Yes on Senate Bill 1381.” By calling 217-782-2000 you’ll be connected to the Capitol switchboard and the operator will be able to connect you with your State Representative’s office in Springfield. The Illinois General Assembly website offers live streaming of floor debates and votes for legislation in House of Representatives and that would be the best way to stay up to date for when this bill will be called for a vote. If the bill is not called for a vote this week then the next chance will be November 29, 30 or December 1.

@Benedick: God you are hot when you talk about cross-cultural grammar. So sexy…

@Benedick: What about kerb?

And krebs are crustaceans.

@Benedick: I only gave up on tyre under extreme pressure …

I see what you did there.

@Benedick: Took me the longest time to figure out what “Ballad of Reading Gaol” meant…

The spare or reversed letter is fine. But perverse spellings will not stand.

@Benedick & nojo: I am fascinated by the British spelling of foetus. Why the silent o?

@SanFranLefty: From the Greek, dontcha know. Also diaroehea, etc.. Pronounced as ee. Also crops up with ae, ie, variations. Here in the Land of the Free we dropped the extra letter and spell it as it’s said. Thank you, Benjamin Franklin.

@SanFranLefty: @Benedick: I like how Brits pronounce Oedipus “EE-dee-puss.” I never understood the joke of the cat’s name in Under the Volcano until I saw the movie and heard it said aloud.

@SanFranLefty: Here, have an œ. Typewriters have ruined the language.

@Mistress Cynica: My fave weird word from the Greek —

I pause while everyone gets the sexytime thoughts out of their heads. Do I really have to name names? Thank you.

— is Aeaea. The island home of the winds. Pardon.