Thank You For Your Service, Wuss 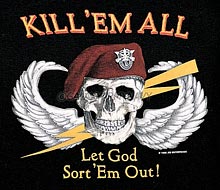 We have feminized the Medal of Honor.

So the question is this: when are we going to start awarding the Medal of Honor once again for soldiers who kill people and break things so our families can sleep safely at night?

Jesus’ act of self-sacrifice would ultimately have been meaningless — yes, meaningless — if he had not inflicted a mortal wound on the enemy while giving up his own life.

The significance of the cross is not just that Jesus laid down his life for us, but that he defeated the enemy of our souls in the process.

Good news! Satan has been dead for two thousand years! And as part of our Peace Dividend, we’ll be removing tax breaks for faux-Christian organizations like the American Family Association! Hallelujah!

The feminization of the Medal of Honor [AFA, via TPM]

nojo
5:30 pm • Wednesday • November 17, 2010
comment »
Choose Your Delusion
Stories We Should Have Seen Coming, But Somehow Didn’t Oh HAYELLLL to the No
15 Comments
ManchuCandidate

I’m not one to judge and neither is anyone who hasn’t made it their profession to shoot at and get shot at by folk.

So the question is this: when are we going to start awarding the Medal of Honor once again for soldiers who kill people and break things so our families can sleep safely at night?

I dunno, AFA, maybe when we start fighting people who actually threaten our ability to sleep safely at night?

@ManchuCandidate: I think that only one MoH has been handed out to date to a still breathing veteran of our Mideast and Central Asian misadventures. All the other Iraq/Afghanistan medals of honor were given to guys who died, if memory serves.

@SanFranLefty:
Which is why the Congressional Medal of Honor (CMH) is sometimes sardonically called the Coffin, Metal Handles because one often doesn’t live long enough to be there to get the award.

To AFA:
John 15:13 Greater love hath no man than this, that a man lay down his life for his friends.

@SanFranLefty: Getting killed saving others lives is what most CMHs are awarded for. I guess the fool at AFA didn’t know what posthumeously means. I read practically nothing except military history and I know of no CMH awarded for excessive enemy body count. They seem to go exclusively to those who keep the friendly body count down. The CMH is a tough gig and I would expect that the few surviving CMH holders today would take great exception to the AFA chicken hawks niave comments.

Yawn. As if every other fundie in the country hadn’t long ago relenquished the idea of Jesus as a peace-loving hippie beatnik in favor of Stone Cold Steve Austin wearing a blue sash. I reserve the right to be blase about these assholes despite the fact that, according to Dan Savage, my refusal to be held accountable for all the Christian fuckwits just makes me a NALT.

Add: Ha! I went looking for an image to illustrate my point, and hit number three under google image search for “muscular Jesus” is this post from our very own Serolf. I’m willing to bet a search for “homo Jesus” would yield similar Stinque-heavy results…but I’m not willing to test that out on the work computer.

@SanFranLefty: @ManchuCandidate: Yesterday’s MoH recipient was the first one living in 40 years. Too bad he’s just a feminized wimp.

Ladies and gentlemen, someone at Gawker had the brilliant idea to ask commenters who their choice would be for Sexiest Man Alive.

Partake of the lusciousness.

@Mistress Cynica: @ManchuCandidate: @SanFranLefty: And that guy was actually really sort of profoundly unhappy to be receiving the honor because the death of his fellow soldiers was all that really mattered. Probably as far from a wussy response as one would imagine.

@TJ/ Jamie Sommers /TJ: Wait, what were we talking about again…?

gah. Yes, lovely. Even if one continent is conspicuously absent.

TJ: 9th Circuit just granted C-SPAN’s motion to televise the Prop. 8 hearing on Dec. 6, and to serve as the pool-feed for all other networks.

@Tommmcatt: Sex God or AVATAR OF SEX?!?!?! You be the judge…: I’m on that continent as I write this. The women are lovely. The men — feh.