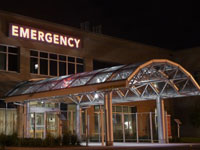 The irony is delicious: a Freshman GOP representative who ran on a platform opposing the Federal government’s plan to expand health care insurance coverage to 30 million uninsured Americans is incensed that his new Congressional health care plan will not take effect for 28 days after his swearing-in:

Oh no, what will he do during those 28 days? Maybe he can drive to a Hospital Emergency room when he gets sick (like the millions of uninsured who have little other option). And it’s not like he’s not eligible for COBRA coverage to tide him over for the next month.

Of course, Harris had a disingenuous explanation when confronted with his hypocrisy and sense of entitlement:

[Spokeswoman Anna ]Nix said Harris, who is the father of five, wasn’t being hypocritical – he was just pointing out the inefficiency of government-run health care.

Actually, there’s no inefficiency here. This beginning coverage period is mandated by Federal law and is not unlike probationary periods at many businesses.

Harris’ sense of entitlement is sickening, of course. It’s nice that he’s facing the same conundrums that many ordinary Americans who aren’t wealthy anesthesiologists face every day. Also, let’s face it. The guy’s still got it pretty easy. he can easily afford COBRA and he at least knows for sure he’ll be getting coverage in 28 days. I know of a woman whose employer informed her that she was being reduced from full time employment to part-time soon after the COBRA benefits from her previous job ran out: the new employer did not want to have to offer her the full benefits (including health care) that she would have been entitled to as a full time employee. Like Harris, her new employer had a probationary period during which she was not entitled to full benefits coverage. Unlike Harris, once she became eligible, her employer found a way to yank the benefits anyway. The cruelest irony, of course, is that she had already exhausted COBRA and was now left to fend on for herself (my wife was HR manager for the company, so I know these details to be true).

So with that, I offer up a toast to Mr. Harris: may you come down with dysentery during your 28 day coverage gap, bankrupt yourself paying for the associated costs out of pocket, and have to live with your wife and 5 kids in a tent under a bridge while in office.

UPDATE: Jonathan Chait gets the Gold for this one-liner:

I think we finally have a working definition of a health insurance crisis–when a member of Congress has to go a whole month without coverage.

Serolf Divad
12:34 pm • Tuesday • November 16, 2010
comment »
Choose Your Delusion
Sure We Were Whores, But We Had Class Celebrity Bloggers and Linkbait Gossip Were My Idea!
13 Comments
Tommmcatt: Sex God or AVATAR OF SEX?!?!?! You be the judge…

The rest is silence.

I mean it. Sometimes they simply stun me into speechlessness.

He’d be in serious trouble if being an Asshole was a pre-existing condition.

Why no, we’d never save those images, why do you ask?

The whole TSA/nekkid scanner thing is really getting to me.

@IanJ:
Based on the lying, I understand why people would be upset.

@IanJ: Mother Jones has an interesting article on “Israelification”, basically echoing Dodger’s observation about their airport security. I also read the Toronto Star article (from late 2009) that it quotes from. Biggest problem I see with TSA is that they’re poorly paid and poorly trained and would be very ill-equipped to carry out a program like that of Israel.

Or, since he’s a doctor and probably knows lots of doctors, any illnesses between now and February 1 will be treated as professional courtesy.

@Mistress Cynica: Exactly so. I was chatting with a TSA guy at LAX while waiting for my shoes to come out of the scanner, and he remarked that we’ve got a lot to learn from the Israelis.

Is it possible for a man to be a See You Next Tuesday? ‘Cause Andy Harris certainly qualifies.

@¡Andrew!: I know quite a few Tuesday men.

@IanJ: Me too. I’m getting on a plane in three hours and am rehearsing my opt-out. Three year old got a grope down, too.

@Mistress Cynica: I like the idea of Israelification — I went through a process like that in Amsterdam last month, and it seemed like an effective way to do it, although time-consuming for the process I witnessed. I had the impression they were relatively new at it. I still had to do a body scan, and I wasn’t happy to see my passport go away from me for several minutes before the conversation part of the process. I’m like most Americans in being unhappy about losing direct control of the passport.

If what I witnessed was any indication, it would be an inefficient way to screen large numbers of people. The process took 8 or so minutes to complete for three people (they had us come up in family groups, and I was traveling with my parents).

I had to wait the 28 days before med benies for the current gig kicked in, and there was no COBRA coverage from the previous job. Prior to the transition, our family doc said that if anything should happen, “he’d work with us”. Gotta love small town GPs.

@SanFranLefty: I’ve got a trans-oceanic trip from hay-ell coming up, and plan to travel light and be prepared for many, many hassles. I may also have to start thinking “boxers, or briefs?”

ADD: @IanJ: I think I would have been deeply concerned to be separated from my passport, but at least it was Amsterdam and not, say, New York.