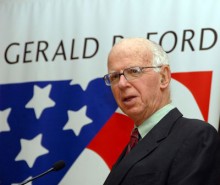 David S. Broder – because attacking a sovereign nation worked out so well the last time:

Here is where Obama is likely to prevail. With strong Republican support in Congress for challenging Iran’s ambition to become a nuclear power, he can spend much of 2011 and 2012 orchestrating a showdown with the mullahs. This will help him politically because the opposition party will be urging him on. And as tensions rise and we accelerate preparations for war, the economy will improve.

I am not suggesting, of course, that the president incite a war to get reelected. But the nation will rally around Obama because Iran is the greatest threat to the world in the young century. If he can confront this threat and contain Iran’s nuclear ambitions, he will have made the world safer and may be regarded as one of the most successful presidents in history.

Just like you never suggested that we attack that other sovereign nation  – 4 letters, starts with the letter “I” … remember?

What a great idea. By “accelerate preparations for war” I’m assuming Mr. Broder means we spend fantastic amounts of money we don’t have on hardware that doesn’t work to keep Boeing and Lockheed and the other contractors fat and generous to the politicians.

Using Mr. Broder’s logic I think the President should go before Congress on Wednesday and demand a new draft. Anyone who owns an assault rifle will be called up immediately and shipped to the Iraq/Iran border as the initial invasion force. Who better to lead these brave men and women into battle than ex-mayor, ex-governor Palin? She could be the next Teddy Roosevelt.

And look what two wars have already done for the economy!

Broder is aware that our “young century” began in 2001, right? As in, the time period to which he refers includes 2002-2003, when the Bush administration called Iraq “the most dangerous threat of our time”? Right?

@mellbell: We do not speak of such times, since the grown-ups were in charge and everything was for the best.

Jesus, what a fucking douchebag… does Broder have even half a clue why WWII pulled us out of the depression? It was a massive undertaking that required the government basically seize the entire economy and put every able bodied man and woman to work supporting the war effort. A war with Iran would much more resemble the shit we’ve seen in Iraq and Afghanistan: a nasty, dusty quagmire that drains the treasury at an accelerated rate (in part because of the impossibility of raising taxes to fight it) but doesn’t increase economic output to a measurable degree or reduce unemployment, and thus, provides almost no economic stimulus. Let’s face it: we’re currently spending 3 billion a week in Iraq and Afghanistan. But we’re basically throwing money away. Meaningful stimulus means huge investments in infrastructure, not adding one more awful bloody drain on the treasury to our current tally of two too many.

@nojo: We do not speak of such times, since the grown-ups were white man was in charge and everything was for the best.

For your own safety, do not, DO NOT go play in the #moviesinmypants hashtag feed on Twitter! Talk about a time sink. In my pants.

@JNOV: The judges declared the contest over after “Sisterhood of the Traveling Pants in My Pants”.

@nojo: Nope. “There Will Be Blood” in my pants is the winnah! The fertile octogenarians say so.

I thought I was the only one who saw Beautiful Losers. I put The Sound of Music, The Killing Fields, Nosferatu, Boys ‘n’ the Hood in my pants, but The Loin King was pretty clever.

Do the Right Thing!

Lots of Shafts and Anacondas in my pants. Zzzzzz.

@JNOV: What does all this mean? Are these addresses?

@JNOV: Looks like too many people were concerned with the front end and completely missed the obvious on the back end:

Gone with the Wind in my pants

@FlyingChainSaw:
MADLIBS of sorts. didn’t you ever play that?
i think we should make one up–FUN!
make up a madlib for us, someone!

movie in my pants? sin city

@mellbell: @SanFranLefty: You can wear a tribute to our collective short-term memory.