The Real Housewives of the Supreme Court 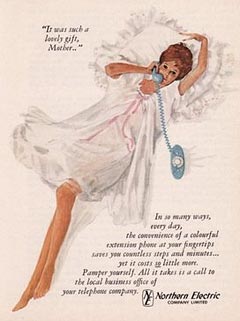 Our guest columnist this morning is Virginia Thomas, wife of the Supreme Court justice, who has generously provided her own premise, alleviating us of the need to imagine an absurdly comedic situation where she would call Anita Hill at 7:31 a.m. on a Saturday.

Good morning Anita Hill, it’s Ginni Thomas. I just wanted to reach across the airwaves and the years and ask you to consider something. I would love you to consider an apology sometime and some full explanation of why you did what you did with my husband.

So give it some thought. And certainly pray about this and hope that one day you will help us understand why you did what you did. O.K., have a good day.

Sometimes people marry the ones they deserve. Hahahahahahahahaha Clarence. I’ll bet your harpy… um, wife keeps your balls and spine in a golden sack surrounded by demons.

BTW, that ad is from my now soon to be departed former employer (before the name change that would be associated with financial infamy and executive greed/idiocy.)

Ginny Thomes probably spends her days wishing her husband would ask her if she’s got a pubic hair on her Coke… hell, I probably wouldn’t put it past her to plant pubic hairs on her Coke in hopes of engending the query.

If Ginni really had ovaries she would’ve called Hill at home, versus her work number. No law professor is in the office at 7:30 am, especially on a Saturday.

Honestly. This woman has been in the background for about two decades now, and over the last year she’s stepped up her game. And to think that she’s had this pent-up crazy inside of her all this time. (Also: she’s nuts too (hit the handy Stinque Rimshot Button).)

@SanFranLefty: Dear, you have to explain “Let Timmy Smoke” thing. Sounds lovely. When I get to San Francisco tomorrow morning, I need to be up on these things.

@chicago bureau: Your San Francisco Giants pitcher Timmy Lincecum got busted last year driving while smoking a doobie. He seems to pitch better when he’s a little high, he’s said as much, but the team/MLB won’t let him smoke. They’re selling t-shirts all around the stadium that say “Let Timmy Smoke” – they’re also selling shirts that say “Fuck Yeah!” which after the Giants won the series against the Braves was his answer on live teevee to the reporter who asked him if he was ready for a champagne shower in the locker room. They’re also selling shirts that say “TORTURE” in the Giants font, I think inspired by a line in this video that has gone viral (they were airing it at a bar I was at before the game).

Yesterday’s game by Matt Cain was beautiful, you should try to make it to game 5 while you’re here. Timmy’s pitching game 5.

I can’t believe I’m missing a Bay Area Stinque Up with you, and being here for games 4 and 5.

Have a blast on The Farm.

@Mistress Cynica: +1…Although I’m open to the possibility this is the work of something she found in Cindy Lou Who’s medicine cabinet too.

Wasn’t there a line up of ladies that claimed to be harassed by Long Dong Silver Thomas?

“Exqueeze me? Was that Mrs. ‘Ginned-up’ Thomas calling?”

@SanFranLefty: I need both of the first two t-shirts. Pronto. And she called at 7:31 am precisely because she didn’t want her to answer the phone so she could leave a message and get some attention like a good little conservative, teabagging media whore that she is no doubt becoming. Maybe she is trying to land a job at Fox News?

Wearing a lavender oxford today. Mrs RML is wearing a purple dress and Son of RML is in a purple tie dyed hoodie.

From the webz: Psycho from Gun Owners of America doesn’t want the gays’ support on gun issues:

Stallard told me that the “Pink Pistols has good relations with national gun rights groups.” Larry Pratt did not think so. His views can be summarized thusly: they should not have any rights; but, they do not deserve to be stoned to death.

Pratt began the discussion of gays by stating that “homosexuality is wrong. So is adultery.” He objected to gays pushing gun rights just as he would object to “Adulterers for Gun Rights.” But, Pratt stated that while he objected to Pink Pistols “pushing it in my face, they do have a right to be offensive.”

Other gun owners don’t have a problem with their help (from the comments):

I love the Pink Pistols. I wish we could get more gay energy in the gun movement. They make us STRONGER!!!

If they like guns and are willing to join in the fight for our rights, they are our brothers and sisters and we are honored to stand next to them.

Jumping off my soap box …. I met a member of the Pink Pistols here in Atlanta. He is a cross dresser. We ended up talking about holsters and how its hard for cross dressers because you can’t wear the same holster as a women in a dress as you can as a man in jeans. I had never thought about that and its stuck with me all these years.

And an actual gay weighs in:

*our* Pink Pistols chapter’s get-togethers are very social. We meet for lunch at a local restaurant one Saturday a month, and then go shooting at a local indoor range. But honestly, I think we spend as much time shooting as we do talking/munching.

The social function is very important; queer shooters tend to be much more closeted about their shooting than their queerness. It’s important to making the world aware that it’s not completely safe to assault someone because they “look queer”; they might very well be prepared to defend themselves effectively.

Hey, gang: in line to vote early at a North Side library — which is across the street from Broadway Bank — Sexy Alexi’s former stomping grounds. Can’t say I’m thrilled to vote for him, but Kirk would add a vote to the batch of fresh crazy coming in. Thrilled to vote for Quinn, though — Bill Brady is a loathesome jerk.

@chicago bureau: That’s my polling place too, neighbor! You’ve got the early part down, now don’t forget to vote often.

Fun fact: Mrs RML’s grandfather voted for several years after he died. Her mom says that he would not have minded so much except that they made him a Democrat.

We have all mail-in balloting, so I voted last weekend. I dunno if I even wanna know how this huge CF turns out.

Re: voting, DC’s a one-party town, so all the big stuff was decided in the primary last month, but I still gotta turn out (early or not – probably not) for neighborhood commissioner and all that jazz.

@ManchuCandidate: Yes, there were others who claimed harassment, or at least odd behavior, by Thomas in affidavits to the Senate Judiciary Committee. Hill was the only one willing to testify.

I read over at WSJ that some are arguing this is some conspiracy by Ginni to distract people and motivate the tea party base, but that assumes Hill would make that message public. I still think it comes down to Ginni’s deeply held insecurities about her marriage that Clarence did something to provoke that morning or the night before. They’re really Catholic (supposedly) so she can’t divorce him or really blame him for anything, so she finds a scapegoat. And, well, who better to pin all your marital problems on.

ETA: Someone should check the new USSC law clerks to see if there’s a hot young thing who resembles Prof. Hill.

@TJ/ Jamie Sommers /TJ: Re: PYT – if there is, she’s already drunk the Kool-Aid.

@redmanlaw: It doesn’t necessarily have to be his clerks.

Also, you know what we have now that we didn’t have before. Three unmarried female justices. Don’t you just know that sticks in Ginni’s craw.

@TJ/ Jamie Sommers /TJ: That hottie Kagan is gonna have to get a restraining order against ol’ CT before he goes all Brett Favre on her.

Ginni has an interesting history, which I decided not to pursue. She was a member of Lifespring in the ’80s, and later sued them for being a cult.

But then again, all white ladies look alike to me. :P

@TJ/ Jamie Sommers /TJ: When I saw that first link in the Latest Comments, I thought it said “http://www.leadersindeepshit.org.”

TJ – ” Hill was the only one willing to testify.”

Actually, “willing” is not the correct word here. When some of the Dems on the committee found out about stories she had told in private, they subpoenaed her. Then the spineless bastards allowed Spector to roast her withhout any protection. A real shitty deal for her for the most part.

Why does this ignorant woman want to reopen this wound after all this time? With luck, this will cause some of the other women he harassed to come forward.

I was out of town yesterday and this AM and missed the details of this story. Am I wrong, or are people just getting crazier day by day?

@Dodgerblue: Yep. While the CDC was sounding the alarm about the bird flu, the whole world got a whopping case of the cray cray.