Today, We are All Drooling on our Boobs 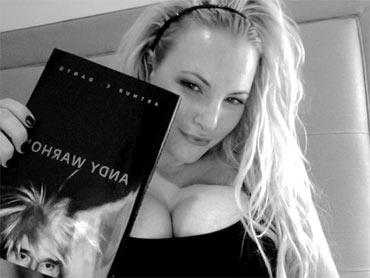 When the right eats its own, we laugh.  My enemy’s enemy is still my enemy, but its a lot more fun to watch them fight it out from afar than to be all up in the tussle, you know?

Anyway, Megan McCain went and dropped some very commonsensical knowledge regarding “nutjob” Christine O’Donnell, who is a candidate for Senator from Denmark or something, when she said:

Christine O’Donnell is making a mockery of running for public office. She has no real history, no real success in any kind of business. And what that sends to my generation is, one day, you can just wake up and run for Senate, no matter how [much] lack of experience you have.

While this statement is humorous because you could easily change “running for public office” to “being a tv pundit” and it would apply to McCain, the reaction of other conservative bloggers to McCain’s claim is better:

this self-indulgent set of mega-breasts doesn’t belong anywhere near a TV studio commenting on anything.

I swear, if Meghan McCain gets any dumber she’ll be drooling on her boobs

Ha ha everyone, let’s all make fun of McCain for her unfortunately large breasts.  How awful it must be for her to live with such pendulously attractive Hindenbergs coming off her body!

Anyway, the lessons we have learned from this are that Christine O’Donnell is unqualified, Megan McCain is not a great pundit, and a lot of other conservatives are misogynistic dumbasses who resort to ad hominen attacks because they have nothing substantive to say, which are not really lessons learned because we learned them a long time ago, when Conservatism was born and a whole slew of unqualified leaders, bad pundits, and misogynists decided it was a good idea for a political party.

As for the contards yakking about her boobs. They’re just jealous because hers are genetic and not the result of many years of no exercise and eating way too many Cheetos and Cheezbuhgahs.

Wait – so being hawt and willing to say idiotic but conservative things is no longer sufficient qualification to be a RW pundit? In that case, who gets to tell Caribou Barbie that she’s done? ;)

I had to laugh about Megan’s line about candidate Ms. I am not a Witch, “She has no real history, no real success in any kind of business.” If you switch “She” to “He”, is there any better description of pre-Governor George W. Bush? As far as that goes, isn’t that also a pretty accurate description of Daddy Senator McCain? His claim to fame, besides being the invulnerable son and grandson of Navy admirals, was getting his aircraft hit by missiles at least twice. Once over Vietnam and once on the carrier deck.

@Dave H: McCain’s other claim to fame is marrying the local Budweiser distributor.

@karen marie wants to know — Fucking integrity, how does it work?: In her defense, as difficult as those words are to type, it’s pretty bad for the “smart” candidate to whiff on a question like that.

I actually saw that interview. Believe it or not, she was informed and well-spoken.

I think mommy’s money might have bought some good handlers.

@Tommmcatt Thinks Masturbation Can Also Involve The Mainstream Media: Much as I think the American aristocracy is lazy they are better informed, better dressed, and much more fun than their English (note to noje: see, it’s ‘English’ as opposed to ‘British’ as I wish to make a sly reference to the cultural imperialism of England, tho, since the BBC has thrown up her hands and entirely abandoned the RP of beloved memory, said imperialism has taken to begging on street corners. “Wot ho, gov! Spare a copper for them what’s lackin’ proper oral hygiene!”) counterparts: they at least look like they know how to fuck and might actually be down with oral. To say nothing of motorboating. Anyone seen Prom?

Now I’m confused: motorboating is the sticking of one’s face into the breasticles and going frummmmmpppppthhhhpt, n’est pas? Or is that motorboarding?

Us gays don’t do breasts. Hence my confusion. Though I remember them fondly. In all their succulent goodness. Wait. Is it Friday?

@Benedick: I think that is motorboating. “Frummmmmpppppthhhpt” is involved in any case.

Us gays don’t do breasts

News reports around the world are talking about a Japanese online retailer that’s selling bras for cross-dressing men. Apparently, they have been flying off the shelves: 300 male bras have been purchased at $30 a pop in just under two weeks.

@Capt Howdy: Eww. Darling, no. That’s not what I mean. Unless, of course… In which case… Personally, I am working hard to keep my marble-hard pecs marble-hard. Plus 6-pack. Thighs, glutes, etc.

I don’t like to compare male fat deposits to the squishy-firm cupable loveliness of the female breast. Adorned as it is with that opening rose of ardor. Or the lovely line of beauty over the hips to the hidden treasure opening to the most urgent part of my body. To say nothing of the opulent line of the thigh to the ass. I venerate my loving experiences with women. I loved their sumptuous bodies. And beg their forgiveness for needing a man to make me complete.

if I understand those are not necessarily for the saggy baggy ones. more decorative. I find them strangely alluring. did I just share too much?

@Capt Howdy: Oooh. I hit mine in the teens. The ladeezs and me. I was all whiplash they were all pert upstanding, liberated, openness. And I thank them for all their honeyed goodness. I did not treat them well. They deserved better.

@Benedick: My monocle popped out, and I just dropped your novel in my bubble bath!

@¡Andrew!: I once loved a womynz to the point of giving up my boyfriend. But I didn’t. She was a lot more intelligent than him. But he had a way of getting my legs up over his shoulders that couldn’t be denied.

The O’Donnell, this is the celebutard phenomenon come to politics, she is the Paris Hilton of politics. It is the endtimes, I think.

@Prommie: It is interesting/horrifying that willful, aggressive ignorance, stupidity, and insanity are considered political assets in our country.