Stinque
Home Latest Comments Log in
If it smells, we’re on it.
Stinque
Cassandra was right.
Horrorshows 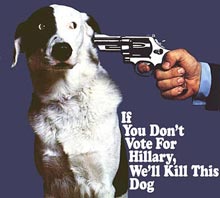 Demrat Governor Not Blago releases the first doggy-snuff video of the 2010 campaign season against Repug opponent Bill Brady, providing us a fresh excuse to revive our once-banned 2008 Swampsow graphic.

The bill in question would have amended a 2009 Illinois law that effectively banned gas euthanizations by shelters, by imposing requirements — particularly against mass dispatches — that made chambers too impractical to use. The bill would have permitted group gassing again, but under vague rules that may or may not be considered loopholes.

On balance, Politifact scores the ad Half True:

We apologize for marring the spectacle with details, but really, we had to know what this one was about.

Details, feh. I for one take politicians at their word when they say, “OMG, you guys, my opponent will totally kill yer puppehs!”

A real Republican would stuff each and every animal in front of a firing squad and demand that it denounce Obama and order the squad to fire when it failed to swear allegiance to GOP values.

@FlyingChainSaw: Then the Necrophagobestiality would commence!