Stinque
Home Latest Comments Log in
If it smells, we’re on it.
Stinque
Mastodon: @stinque@mas.to
Brushes with Fame 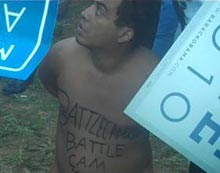 We’re not sure why all the Obama Philly Rally news is coming from Fleet Street, but here’s the rest of it:

If billionaire Alki David is an honest man, the man who streaked in front of Barack Obama at the president’s rally today in Philadelphia will be paid $1 million for his stunt. The man who performed today’s stunt, which captured the attention of the Drudge Report and an Associated Press photographer, is 24-year-old Juan James Rodriguez, THE WEEKLY STANDARD has learned…

The requirements of the streaking stunt, David told me, are that the streaker must have been within “eye-shot and ear shot of the president, they have to scream the name ‘battlecam.com’ six times, and they have to be nude.”

Before we leave These Isles, let’s go to David Niven for the call: “Isn’t it fascinating to think that probably the only laugh that man will ever get in his life is by stripping off and showing his shortcomings?”

Man Streaks in Front of Obama for $1 Million [Weekly Standard]

nojo
3:27 pm • Monday • October 11, 2010
comment »
Choose Your Delusion
This Assassination Brought to You By The Gap Behind the Circus
15 Comments
redmanlaw

If it’s like one of those “make a hole in one and win a million dollars” offers, the maker will find a loophole not to pay, i.e., streaker made the required utterance only four out of the mandatory six times, substantial compliance is inadequate, etc.

The insurer for a local charity that made such an offer for a recent golf tournament sent investigators to measure the distance from the tee to the hole and had a former FBI agent interview the winner before declining to pay the prize on grounds that the distance to the hole was too short. The car dealer who offered a free SUV as a prize is making good, however, because the owner said it’s the right thing to do.

he will say something like, but you didnt cross your fingers.

“Bush Not Sufficiently Manscaped and Therefore Gross”
“Not Cut”
“He was brown.”

How the h-e-l-l did I not know about this offer?

Streaking the president’s rallies for the amusement of millionaires may be one of the last (legal?) ways to make money these days.

I give you … Sugar Madness!

@TJ/ Jamie Sommers /TJ: I tried to understand but I don’t.

Also. People. You must stop keeping things from me. This whole Magnets how do they fucking work? thing is real!! I had no idea. Did you know there are two chaps calling themselves Insane Clown Posse? I’ve just been reading about them in The Guardian. They have fans and everything!! They go places and smash things. It’s adorable. If only they weren’t quite so boring. But I suppose one can’t have everything.

@Benedick: yes they also recently flung poo at a reality star named Tila Tequila, who was engaged to marry the daughter of New York Jets owner Woody Johnson, until she died of a diabetic shock. And I’m sure Brett Favre’s dick is involved.

How the hell do I know all this random gossip and trivia? Probably too many Us Weekly readings on long flights and too much Defamer.

karen marie, Stinque Senior Clown Correspondent who is irritated at the unserious nature of the coverage

@Benedick: I can’t imagine how you missed the fucking magnets thing — it’s so great! So useful for pondering other questions, like fucking life, how does it work? etc etc.

@karen marie, Stinque Senior Clown Correspondent who is irritated at the unserious nature of the coverage: That’s right. I just thought it was something made up as a joke. I didn’t dream it was meant seriously. Stupidity. How does it fucking work?

@SanFranLefty: Wait, what? Tilla Tequila is dead? That bums me out, she was young.

Oh, no wait, her fiancee died. I remember that.

karen marie asks “fucking clowns, how do they work?”

@Benedick: No, no — you have to get the fucking in the right spot — it’s “fucking stupidity, how does it work?”

@Tommy: Apologies for my confusing pronoun usage. Casey Johnson was the one who died, Tila had poo thrown at her by the insane clowns.

@SanFranLefty: Wait -Casey Johnson was Woody Johnson’s daughter and he has to deal with the Favre thing also this year?

Great opening music for the game would have been Metallica’s “For Whom the Bell Tolls.” Starts out with a big bell ringing: “Dong . . . dong . . . dong.”

@karen marie asks “fucking clowns, how do they work?”: I need to be taught these things so I don’t make a fool of myself in Price-Chopper.