Talibunny Visits the Castro (Sort of) 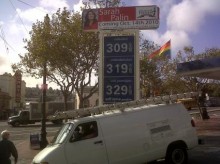 The No-Longer-ARCO/BP gas station that’s on the corner of Castro and Market across from Harvey Milk Plaza and catty-corner to the Twin Peaks Tavern, one of the oldest gay bars in SF [with some of the oldest gay men, badump!] apparently decided it wanted to invoke a boycott, as this morning its owner allowed The Liberty Freedom Foundation* to put up a billboard advertising the Snowbunny grifter’s speech on Oct. 14 at San Jose’s Center for the Performing Arts.

Victor Cocchia, executive director of this bizarro foundation, told the San Francisco Chronicle that “the Castro is supposed to be about a message of tolerance, and we hope that tradition stays.  Hopefully, people will listen with an open mind…at least they heard it straight from us.”

I’ll go by the station this evening and report as to whether the sign is still there or if a mob of gheyz have torn it down in response to the middle finger from Palin supporters.

SanFranLefty
8:05 pm • Thursday • October 7, 2010
comment »
Choose Your Delusion
Just Slip a Tongue Under the Tree How Not to Be Seen: The Remake
13 Comments
al2o3cr

Re: the LFF website – love the quote from St. Raygun. Apparently they’ve trimmed the “…too much on missile defense, arming Saddam, arming Osama, trading guns to Iran…” part off the end.

On a technical note, FAILx10 for not even bothering to keep the “Recent Events” page synced up with the “Events” page. HTML, motherfuckers, do you speak it? :)

Wonder who is behind this ‘group’? The Kochs? Rove? Some other sociopath billionaire?

Hey, I respect those old dudes in the Glass Coffin, as we used to call it. They lived through the bad old days and lived to tell the tale.

Ladies and gentlemen, The Real Oregon. Starts about ten miles outside Eugene.

Robinson established the Oregon Institute of Science and Medicine in 1980. In its early years, the OISM focused much of its attention on a new theory that Robinson had developed regarding “molecular clocks” that he thought might influence aging. It also became involved in issues related to nuclear war and civil defense. It published two books, Nuclear War Survival Skills (foreword by H-bomb inventor Edward Teller), which argues that “the dangers from nuclear weapons have been distorted and exaggerated” into “demoralizing myths.” Robinson also co-authored another civil defense book titled Fighting Chance: Ten Feet to Survival, in collaboration with Gary North, who like Robinson is a conservative Christian.

This is why the puritans on our side will one day find themselves shoveling human ashes out of the ovens.

“The Republicans have a valid point of view, I believe in their right of expression. Hey – are those my mother’s crowns?”

ADD: Giants better wrap this damn game up in the next six minutes before Project Runway starts.

@nojo: I fished the Willamette below some dam outside of town. I passed a machine gun rental place on the way. Didn’t catch anything although it was beautiful (trout are slow in March), so I may as well have gone shooting.

@SanFranLefty: And the Giants’ stoner pitcher with a growing-out mullet obliges me, winning the game and pitching all 9 innings.

@redmanlaw:
Isn’t it always the case?

Haven’t been too active… Spent most of today watching workmen replace my windows. Home renos are bloody expensive. The contractors just finished replacing my roof (shingles) and windows this week, just before Canada City Thanksgiving. Got to hit the blind store for some new blinds and curtain rods this weekend.

Problem is that I’m not done yet. The contractors are coming in next week (?) to replace the eaves troughs. Once that’s done I (not a contractor) nuke the lawn and I fix the walkway.

Jeebus. This is the year my home beat the living crap out of my bank account.

Glad I got a raise this year (hardly anyone did) not because I’m brilliant and earned it but rather because HR figured out I was significantly under paid for my skills and experience level. Flash back some 4 years ago when my former employer HR types told me that I wasn’t “allowed” to get a signification raise in one year because they thought I was a feeb who couldn’t handle the sudden increase in money. Of course, I was leery of the line but I reluctantly put aside thoughts of walking over to the HR turd and strangling him. That changed when six months later, I learned that the top execubots and his minions (who would later kill the company) were given the same large % increase that I was supposed to be in line for. At that point I stopped giving a shit about work and did as little as possible till I was “sold” off to the new employer and had to give a shit again.