Christine O’Donnell Fantasizes About Getting Tapped By Joe Biden 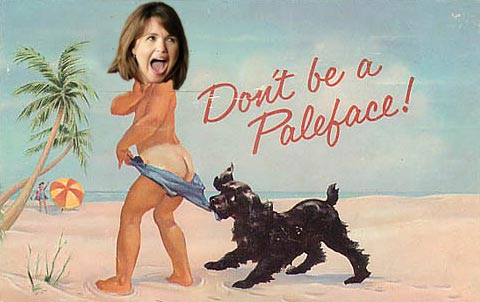 Okay, we’re starting to stretch here, but Politico has done what Politico does best: Dig up the dirt…

Kristin Murray, who left her position in the state party to serve as one of several campaign managers for O’Donnell during that [2008 Senate] race, said warning bells went off in June 2008 when the two were discussing cell phone plans.

“She told me that she thought Joe Biden tapped her phone line,” she said.

And now that we’ve switched your bait, let’s listen in on her surefire campaign plan:

The tea party giant-killer who knocked off Rep. Mike Castle Tuesday is barely recognizable to [former aides]. They remember a candidate who was less interested in conservative causes than scoring a television deal, one who suggested dodging campaign vendors, believed she could give the keynote speech at the Republican National Convention and fixated on a harebrained idea to distribute tens of thousands of two-ounce suntan lotion packets to voters…

O’Donnell’s idea: To affix a clever slogan to packets that read: “Don’t Get Burned By Higher Taxes. Vote Christine O’Donnell 2008” and distribute them at local parades.

That’s actually kind of cute, in a student-body president kind of way. But not as cute as the punchline:

“It was an irresponsible idea,” said David Keegan, who served as O’Donnell’s financial officer. “And half the people in the street thought she was throwing condoms out of the truck.”

Sounds like a missed bet: “Don’t Get Fucked By Higher Taxes” has a nice ring to it.

She sounds more like Palin by the minute. They should join the revival of Chicago.

@Benedick Arnuldsson: Are you daring me to paste their heads into the Cell Block Tango?

I wonder if any of her staffers pointed out what some constituents might *do* with a miniature packet of lotion… ;)

Was O’Donnell copying that idea about suntan lotion from the lovely and orange Rep. Boehner? Oh wait, he couldn’t possibly be giving any of his suntan lotion away or he’d be burned to a crisp.

Everyone made your reservations for spending October 30 in DC at the Colbert “March to Keep Fear Alive”? I think we Stinquers are the people Jon Stewart wants to keep away from his “Rally to Restore Sanity”.

@Dave H: Can we all dress as zombies and march under a Cannibal Anarchy banner?

@Walking Still: If I wasn’t three thousand miles away, I’d totally be there for that.

@nojo: I am three thousand miles away, and I’m tempted.

@Walking Still: Yeah, but if I took a trip to DC instead of a long-delayed jaunt to the Ancestral Home, my parents would be pissed.

@Nojo: Does your mom know yet about the smoking?

@SanFranLefty: No. The dog gets a lot of walks when I’m home.

@redmanlaw: Yeah, that racist, anti-Semitic war criminal Tricky Dick also signed the Clean Air Act and the Clean Water Act, and created the EPA. A twisted individual. My Dad met him once and said he was way more personable live than on TV — which really wasn’t saying much.

@Dodgerblue: Richard Nixon was down with the Red Man. I wanted to put his picture on the wall at my old environmental law firm, but the director would not stand for it.

Even Richard Nixon has got soul.

Imagine that you knew where you came from. That’s what this place is for us.

@redmanlaw: I came from the hospital around the corner from the Animal House. Anything before that is all fog and Ry-Krisp.

@nojo:
don’t they smell it? i can take a shower, put on clean clothes, brush my teeth 4 times and spray a little extra perfume. still, every time i walk into a family member’s home, they shriek, you smell like SMOKE EWWWWWW.
also noje…cell block tango? i heart you so much!