Stinque
Home Latest Comments Log in
If it smells, we’re on it.
Stinque
Mastodon: @stinque@mas.to
A Special Place In Hell, Sean Hannity's America

Drinking the Haterade at the Tea Party

Human beings with a sense of decency are demanding that Montana’s Big Sky Tea Party remove Tim Ravndal from his position as President of the state party after he joked about killing LGBTQ people and the torture and murder of Matthew Shepard.

Ravndal had stated in a Facebook post that marriage should be between a man and woman (blah blah blah) and one of his fans commented, “I think fruits are decorative. Hang up where they can be seen and appreciated. Call Wyoming for display instructions.”

Ravndal’s response: “Where can I get that Wyoming printed instruction manual?”

The original commenter then responds to Ravndal, “Should be able to get info Gazette archives. Maybe even an illustration. Go back a bit over ten years.” 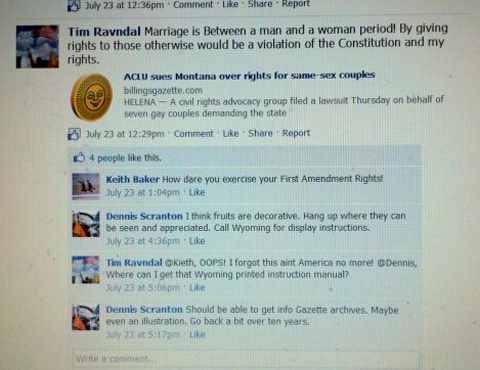 Way to keep it KKKlassy, teabaggers.

An alleged press release from the Big Sky Tea Party has been posted on two gay rights blogs announcing that Ravndal was fired, but there is no evidence of this on the party’s website.

Hooray, may this kind of thing happen again and again!
We all know they are racist bigoted homophobic mouthbreathing pigfuckers. Its a GOOD THING when they come out with it and admit it. Its a good thing, I celebrate it. As their little teatard movement enjoys its hayday, I hope more and more feel bold enough to speak out and tell the world that they are really about, its the best thing that can happen, so the good, but simple-minded people who might otherwise buy into the “patriot,” “restoring the constitution,” happy USA mom and apple pie rhetoric see what they really are.

A weekend poll shows that Hispanics in New Mexico favor Albuquerque’s policy under which the immigration status of everyone booked into jail is checked, and also oppose giving driver’s licenses to undocumented aliens. The pollster said native New Mexico Hispanics, with long-running family histories in the state, often aren’t sympathetic to immigrants. “Many native Hispanics resent people trying to lump them all into one category,” he also said.

This year, the gubernatorial race is about who hates Mexicans more (the Hispanic GOP candidate) and who was not Bill Richardson’s lt.gov (which is was the Dem candidate did for eight years). Mrs RML thinks that the Hispanic north will continue to vote Dem as they always have but I agree with the pollster.

@redmanlaw: The breakdown of the Mexican State, the incredible state of drug-gang anarchy, yes, I know, Clinton caused it with Nafta, which allowed Con Agra into Mexico and put all the family farms in Mexico out of business, but seriously, does the state of things in Mexico make any impact?

The obvious impact of NAFTA, the sucking sound of manufacturing jobs fleeing to Mexico, we all knew that, but, less publicized, NAFTA allowed the US agribusiness conglomerates to sell corn in Mexico, and from what I have read, sell for less than the Mexican, family-farm oriented producers can charge, and thus, the massive influx of immigrants the last 16 years, is not so much as they say, people seeking work here, as people fleeing joblessness at home? Noone leaves home to risk being an illegal worker in a foreign country, if they can find work at home. I have read that the traditional Mexican family-farm agriculture economy was destroyed by NAFTA, and that is why millions of young mexican men have come here, the last decades, because there is nothing left for them to do in their villages. And the Mexican manufacturing boom is not replacing the lost agricultural jobs, because Mexico is seeing all that manufacturing being moved again, this time to China.

Clinton, seriously, his sell-out, was the death of liberalism. Clinton signed on with Cheney’s PNAC and made “regime change in Iraq” the official policy of the US government, setting the stage for W and Cheney’s war for oil. Clinton sold out on every single major, overarching issue affecting social justice in general, and the welfare of the US working class in particular, that it was possible for him to sell out. And he was an Iraq war hawk 4 years before 9-11.

@Promnight: The people I know came over for work, both before and after the drug wars started. Others came as kids because their parents were looking for work. One woman I know won’t buy Disney costumes because her mom sews them at home in LA on a piecework basis. Another guy I know, a lawyer, came over because he didn’t want to choose between political factions. I remember meeting him and his American fiance (a friend’s step sister) in Albuquerque, and it sure seemed like they were on the run.

Chappelle’s Show “Playa Haters Ball” had nothing on these fuckos.

@Signal to Noise: Since it’s Burning Man weekend and the hipsters aren’t around in Ess Eff, I read “playa” not in Chappelle’s sense but in the “Dude, let’s go buy a $350 ticket so we can do drugs and set shit on fire on the playa” sense.

@SanFranLefty: ran video of that ish yesterday AM. even at my most acid-drenched in college I never understood what drove people to go out to the freaking Nevada desert at the end of August/beginning of September to do loads of drugs and listen to music. Had they ever been to Vegas in August before that?