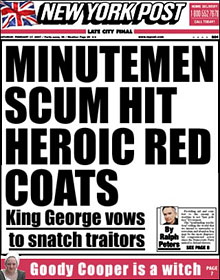 Mirabile dictu, the Times scores an interview with the elusive Sharron Angle:

A. People have always said — those words, ‘too conservative,’ is fairly relative. I’m sure that they probably said that about Thomas Jefferson and George Washington and Benjamin Franklin. And truly, when you look at the Constitution and our founding fathers and their writings, the things that made this country great, you might draw those conclusions: That they were conservative. They were fiscally conservative and socially conservative.

We’re not entirely clear what’s “conservative” about overthrowing a legitimate government and denying the divine right of kings. Nor are we sure what’s “socially conservative” about boffing all those fancy French ladies when John Adams isn’t looking.

Then again, boffing your own slaves? Nothing more traditional than that.

Key finding: “The poll found Kentucky Republicans do not enjoy the big advantage in campaign enthusiasm found in other state and national polls. Republicans lead Democrats only 59 percent to 57 percent in having a high level of interest in the race.”

B Franklin was conservative? I did not know that. That would account for his conservative desire to have one chamber that was elected every year. And Jefferson? Don’t tell his boyfriend (Yes, everything IS about the gay with me. Deal with it). As for Adams… He can go fuck himself. Asshole. The only good thing about him is Laura Linney.

This kind of thing makes me crazy, as obviously these “New Enlightenment” figures were in no way part of the current left-right paradigm of today. Furthermore, the dominant economic system of the time, Mercantilism, is no longer practiced in any way, shape, or form, except as a leftover marketing gimmick for Dewars. When Hamilton (or, for that matter, Adam Smith) discussed opening up markets, it was in the context of Merchantilism. It’s almost apples and oranges. And don’t get me started on their social mores. We might as well be talking about cavemen, frankly.

All of this is obviously beyond the reach of Ms. Angle, to whom I am superior and about whom I never, ever think.

Breaking: Angle in favor of texting while driving on freedom of speech grounds . . .developing . . .

Sharon… your ancestors hoofed out the “conservatives” in post revolutionary US America and their ancestors eventually became my neighbours.

@redmanlaw: Trouble is, about a third of those “Kentucky Democrats” vote exclusively for Republicans for federal office, so the apparent lack of an enthusiasm gap is beside the point.

America needs a war on stupid.

It’ll be turbo-embarrassing when we lose that one.