Stinque
Home Latest Comments Log in
If it smells, we’re on it.
Stinque
Mastodon: @stinque@mas.to
The Gays Are Everywhere

Invasion of the Hardbody Snatchers 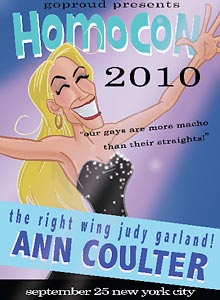 Our guest columnist is Joseph Farah, publisher of WorldNetDaily and celebrated mustache-ride entrepreneur.

Conservative superstar Ann Coulter today was dropped as a keynote speaker for WND’s “Taking America Back National Conference” next month because of her plan to address an event titled “HOMOCON” sponsored by the homosexual Republican group GOProud that promotes same-sex marriage and military service for open homosexuals.

Joseph Farah, editor and chief executive officer of WND, said the decision was a gut-wrenching one for his team because of their fondness for Coulter as both a person and writer-speaker.

“Ultimately, as a matter of principle, it would not make sense for us to have Ann speak to a conference about ‘taking America back’ when she clearly does not recognize that the ideals to be espoused there simply do not include the radical and very ‘unconservative’ agenda represented by GOProud,” said Farah. “The drift of the conservative movement to a brand of materialistic libertarianism is one of the main reasons we planned this conference from the beginning.”

Asked by Farah why she was speaking to GOProud, Coulter said: “They hired me to give a speech, so I’m giving a speech. I do it all the time.”

Stop the presses! Mr. Farah emails us with an update.

With his trademark blackboard in the background, Glenn Beck’s bold lessons about the Founding Fathers, America’s Christian heritage and stealth attempts by communists — even within the current administration — to undermine liberty leave many conservatives rapt and rooting for more.

But even as they admire how passionately he’s enlightened Americans about U.S. history and threats to the country’s constitutional sovereignty, two authors revered by the right say Beck needs a lesson on how his latest stance is actually aiding and abetting the subversive roots he labors intensely to expose.

By becoming the latest conservative to capitulate to same-sex marriage, Joseph Farah and David Kupelian warn Beck that he’s “knuckling under to a movement with Marxist roots that’s intent on sabotaging traditional morality and religion.”

WND dumps Ann Coulter from Miami due to Homoconflict [WND]

Why conservatives are abandoning the ‘gay’ issue [WND]

nojo
12:45 pm • Wednesday • August 18, 2010
comment »
Choose Your Delusion
How Can We Miss You When Your Policies Won’t Go Away? For Whom The Tweet Tolls
25 Comments
Benedick

/threadjack/ Next Media, the people behind the Tiger Woods domestic drama animation, have outdone themselves. Magical realism at its finest, folks.

I love how the WND crowd jumps straight from gay marriage to “OMG JEEBUS WILL BE ILLEGAL”. It’s as if they assume that everyone else in the country are fascist douchebags like them…

Just admit it, WND. You’ve got a hardon against gay marriage because it makes gay sex open and not dirty the way you like it.

@redmanlaw: Does CJR still run those? For that matter, is there still a CJR?

@nojo: One of their guys has a fantastic blog, Regret the Error.

Question: How does Eric Holder saying he expects an investigation to “produce results” violate federal regulations and/or ethical rules?

It is on like Donkey Cong, Conservaqueers. How dare you? I’m taking this up with the union.

/OMG IRL TJ/ (could that be any more annoyingly acronymic?)

It’s not that I avoided images of Pareene all along, but I never sought them out either, which means my mind is kind of blown by seeing and hearing him on Keith O. Nice tee, dude. /sarcasm

@Tommmcatt Cannot Be Arsed To Think About Sharon Angle: C’mon, the kapos need to worship something, and Eva Braun wasn’t cutting it.

BTW, we have a union now???? I forget because I live in a “right to work” state.

@flippin eck: But the tee & jacket works for Ana Marie, doesn’t it?

@flippin eck: I’m mildly in love with Pareene (as a writer, sheesh!), so I’ll forgive his poor dress.

Odd Sideburn Man: “This is a revolution from the bottom up…” Hmmmm…sounds like a commie to me!

Oh, Pareene. People in glass houses and such.

@mellbell: Honestly, when I saw that last night, here’s what I thought:

If I ever get called up for a cable-news interview, now I know what to make of my meager wardrobe.

Of course, if I do ever get called up, it will probably be to answer for something Chainsaw wrote.

@nojo: Promise me you’ll wear a ski mask and a CANNIBAL ANARCHY IS SERVING MAN! T-shirt.

@flippin eck: He actually looks better than the last time I saw a picture of him.

But holy hell! The Kibbe sideburns are unfuckingbelievable. What the …
How does … I don’t …

@TJ/ Jamie Sommers /TJ: Can you imagine the time it takes to make them symmetric?

@JNOV: Oh gawd, I didn’t even think of that. If it’s anywhere close to the time it takes me to make my eyebrows symmetrical, it takes a long fucking time.

@TJ/ Jamie Sommers /TJ: That’s EXACTLY what I was thinking and why I no longer mess with my brows.