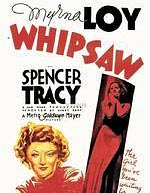 Instead, let’s take up his Wednesday column subheaded “African-American conservatives explain that the only racists are those who worry about race-based prejudice.” And let’s ignore the substance of the column, in order to focus on the complaint of commenter “Sissy Willis,” who calls Weigel out for using “code” language:

And while we’re ignoring things — because hey, life is short — let’s dwell on Alleged Codeword #4: “whipsawed”.

Quite honestly — and we do pay attention — that’s a new one to us.

We don’t have our beloved American Heritage handy, but Merriam-Webster dates the verb to 1842:

to beset or victimize in two opposite ways at once, by a two-phase operation, or by the collusive action of two opponents (“wage earners were whipsawed by inflation and high taxes”)

Okay, that’s pretty much our understanding. You have an object that morphs into a colorful verb. Language is fun!

We’re quite capable of missing something, but a Google search of “whipsaw legree” shoots a major blank. Which, while extremely unusual for a Google search, is not definitive.

So: Help us out. Is “whipsaw” coded racism? With documented historical or contemporary examples? Inquiring philosophical linguists want to know.

To answer my own question: It appears Sissy Willis is confusing “whipsaw” with “whip.”

@nojo: Whoops. Or is that Whipps?

Kagan made it in. Not exactly a TJ, but kind of a TJ.

@IanJ: I was thinking of TJing it myself, but couldn’t decide on the most absurd location.

@nojo: “couldn’t decide on the most absurd location.” A glimpse into the powerful, perverse, and intriguing mind of Nojo.

I always think of this when I think of “whipsaw.” And getting emotionally punched around — you feel like the log being sawed.

This ambiguously brown US citizen has no issue with the word. And FSM knows I can see racism around every fucking corner if I care to actually see it. But if I allow myself to, it just pisses me off.

@IanJ:
i may have to change my avatar in celebration.
Original Andrew: your gift to me of Ruthie flipping double birds is one of my favorite gifts of all time. got one with Elena?
gay marriage is on the horizon, i see it! and 6 ovaries Supreme.
i’m so happy happy happy!!! and Al, you’re good enough, you’re smart enough, and doggone it, i love you!