All In Good, Clean, Assassination Fun 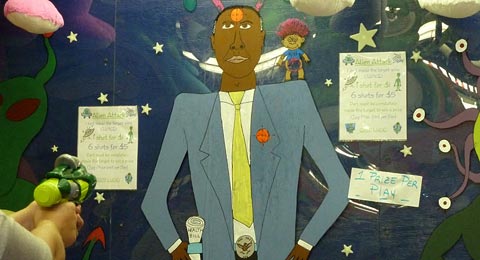 Speaking of miscoded racism, let’s take a swig of the real stuff:

In Roseto, Pa., a carnival company closed down a shooter game called “Alien Attack,” after complaints and news stories that President Obama was one of the targets.

The black “alien leader” is holding a scroll titled “Health Bill” and wearing a presidential seal belt buckle. He also has antennae and a troll doll with a KISS T-shirt on his shoulder…

Why, yes, the Secret Service had a few words with Mr. Good. Why do you ask?

I hope kicking the fucktard to death and giving him a nice long Ballatine Ale piss on his twitching corpse is deemed ‘appropriate.’

Yeah, it could be any black leader who recently pushed through Healthcare reform.

List of leaders who happen to be black who recently pushed through Healthcare Reform:
Barry Obama
That is all…

@ManchuCandidate: And John Lewis, civil rights hero and cubbie’s CongressCritter, who the teabaggers said was lying about being spat upon…

Geek Update: And, we’re back. No clue why we went away.

Of course, now Twitter’s down. Between Kagan and Prop 8, something’s afoot.

I was wondering what happened. FB went away this morning, somewhere deep in their tfbnw.net maze.

Down and back again. I’m getting dizzy.

“We’re currently experiencing a high error rate on Twitter. Our infrastructure and operations engineers are responding to the incident.”

Via Twitter’s Tumblr. We’re all doomed.

@nojo: It could actually (legitimately) be the coronal mass ejection from the sun earlier this week. It was scheduled to hit yesterday, but it could be thwacking us a bit later than expected.

@IanJ: My first thought too. Now where’s our aurora borealis bright enough to be seen during daylight hours?….to be quickly followed by the Four My Little Ponies of the Apocalypse!

A furor for our Nora
And the Borealis seen
Oh where throughout the summer
Has our Borealis been?

From memory, apologies for any miscues

@Walking Still: Very nice. I’ve seen them once or twice from northern Michigan and they truly are breathtaking.

@IanJ: I’m thinking something less exotic — it was pinging fine when web/FTP access was down (or incredibly slow), so it may have been just a gummed-up system.

Haven’t rebooted the server in eighteen months, that I recall. We were due for something.

Weigel linked to the Whipsaw post. Just a mere sudden rush of traffic…

Back on topic: this is the kind of news item I see frequently in the local fishwrap and think “ho hum, another day with the guns and bitters”.

You know you are among real Amurikans if….
…they wear belt buckles that signify accomplishments or hobbies.

(Can you imagine BO wearing a belt buckle with any kind of recognizable image? Gaaa.)

@SpongeBobtheBuilder: I wonder what you’d call those people who wear belt buckles that say CSA on them.