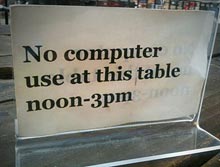 This portion of our test is designed to measure your comprehension. Please read the following passage thoroughly before answering the questions below.

A few weeks ago I decided to mosey over to a local Manhattan coffee shop for an afternoon cappuccino.

After placing my order I sat down at a table and pulled out my Amazon Kindle.

I barely made it a sentence into the e-book I was reading before an employee of the coffee shop came by, stood over me and said, “Excuse me sir, but we don’t allow computers in the coffee shop.”

I looked up at him with an incredulous look and replied, “This isn’t a computer, it’s an e-book reader.”

He then told me that the “device” in my hand had a screen and required batteries, so it was obviously “some variation of a computer.” The coffee shop, I was told, did not allow the use of computers.

Annoyed with this distinction, I peppered the employee with questions on why reading on paper was more acceptable than reading on a screen. Flustered and confused by the existential debate he had been dragged into, the employee resolutely said, “Look, no computers in the coffee shop.”

I was dragged into a similar dispute at a sandwich shop in Brooklyn, this time while reading and taking notes on my iPad. The employee there said no computers were allowed between noon and 3 p.m. After another lengthy defense of e-readers and screens, I lost, again, and sat there resentfully picking at my sandwich.

1. Would you consider the writer…
a. Somewhat entitled.
b. Very entitled.
c. A fucking asshole.

3. Which sandwich is most likely to make the writer resentful?
a. Ham on rye.
b. BLT.
c. Turkey.

4. If you were rewriting this passage as a Seinfeld episode, which device would you plant with another patron as a foil to your protagonist?
a. An abacus.
b. An HP programmable calculator.
c. Stephen Hawking.

5. What, in addition to a Kindle and an iPad, is the writer likely carrying with him?
a. A Bluetooth earpiece.
b. Three-year-old rubbers.
c. Drama, drama, drama.

No E-Books Allowed in This Establishment [NYT]

After another lengthy defense of e-readers and screens, I lost, again, and sat there resentfully picking at my sandwich.

Am I a bad person because I laughed at this line?

from “Life is Beautiful”

Giosué Orefice: “No Jews or Dogs Allowed.” Why do all the shops say, “No Jews Allowed”?
Guido: Oh, that. “Not Allowed” signs are the latest trend! The other day, I was in a shop with my friend the kangaroo, but their sign said, “No Kangaroos Allowed,” and I said to my friend, “Well, what can I do? They don’t allow kangaroos.”
Giosué Orefice: Why doesn’t our shop have a “Not Allowed” sign?
Guido: Well, tomorrow, we’ll put one up. We won’t let in anything we don’t like. What don’t you like?
Giosué Orefice: Spiders.
Guido: Good. I don’t like Visigoths. Tomorrow, we’ll get sign: “No Spiders or Visigoths Allowed.”

There are times when you must throw chairs through windows and this is one of them.

There are times when you must drop trou, take a shit on the floor and leave and this is one of them.

There are times when you must throw half-witted unemployable self-righteous fucktards into the gutter, stomp them and piss on their faces and this is one of them.

The question is which imperative should you satisfy first?

@FlyingChainSaw: You have a criminal defense attorney on retainer, yes?

@JNOV: Usually in the car with me, yes, but in this case the jury would burst into applause upon hearing Nojo’s story of enduring savage abuse and his subsequent righteous mayhem making.

Even though I don’t agree with the shop’s logic and its distinctions between pixels and paper, I can appreciate a place hoping to offer an escape from computers and the Web. But as e-books continue to thrive and grow and more people, including students, replace their paper products with digital versions, these coffee and sandwich shops might not have much of a choice but to accept that some people now read books on screens — even if they do look like computers.

Except I doubt this has anything to do with the place wanting to offer an escape from the web. More likely, the coffee shop doesn’t want a patron tying up their tables for hours at a time browsing Facebook while sipping on a single cup of coffee and a chocolate chip cookie they bought when they first came in.

To be honest, I’ve never quite understood how your typical coffee shop manages to stay in business. Maybe they’re all just fronts for the owner’s hashish business, but other than that I don’t see how you pay the rent selling $2.00 coffee cups and $1.50 chocolate chip cookies to a few dozen patrons every hour.

A few weeks ago I decided to mosey over to a local Manhattan coffee shop for an afternoon cappuccino. Right there I wanted to kick him in the nuts. Mosey? Tell me this is from the New Yorker. It reeks of New Yorker. Smug masquerading as wry.

@Serolf Divad: You’ve gone into things like Starbucks? Been in these kinds of things like 5 or 6 times because they are completely out of hand. “Asshole, say fucking Grandississimo with a sneer like I do when I ask you ‘what size’ or you won’t get your fucking coffee and, yes, that will be six fucking dollars, kiss my ass.” Coffee is raised by slaves offshore and costs $100 per metric ton. The kid at the register makes $4 an hour and the kid who makes the coffee makes $5 on the theory that the extra buck will bribe him or her into not spitting in the coffees in front of the customers. The ones with foot traffic do make money and Starbucks clusters on corners to kill all competitors off and make sure their stores are the surviving operations in a given neighborhood. Costs them rent on a store here and there for a year or so but it helps bring the boot down on the throat of the competition. They make plenty of money, most of it likely on crappy takeaway coffees. The assholes in the chairs are there for ambiance and to pay for the ridiculously overpriced wireless ‘service’.

@Benedick: I found it much easier to tolerate this sentence, “A few weeks ago I decided to mosey over to a local Manhattan coffee shop for an afternoon cappuccino.” by imagining it said by Sam Elliott reprising his role from The Big Lebowski.

Actually, this is exactly why we need annoyed monkeys. Coffee jerk pulls this kind of shit, open bag and produce annoyed monkey with bad habit of savage genital biting and go back to reading.

I would have come back with a brick for the window.

I’m wondering whether the author of this piece has ever had, or will ever have, a job.

@Tommmcat Still Gets Carly Confused With Meg: Isn’t the question, “Not pooping inside yet?”

That’s the day Lucy and I are going to celebrate.

She had her four-months birthday yesterday and now weighs 9.8 pounds. Good dog!

NO. we’re trying something new today. when she pees or poops in the house, we shun her, don’t look at or talk to her then when we go outside and she does, we throw a parade. so far, so good today. not one accident–yet.

@karen marie:
you have 2 weeks on us, now i feel better, thanks and good luck to both of us!

@FlyingChainSaw:
the dog has incredible instincts already! she adores a gaggle of children and growls at the trash collector. the rat is going to israel for 3 weeks without me. i have him lo-jacked, but he doesn’t know it. amazing technology out there for the pathetic. Bella will know what to do.

“the dog has incredible instincts already! she adores a gaggle of children and growls at the trash collector.”

Have you tested her on Republicans yet?