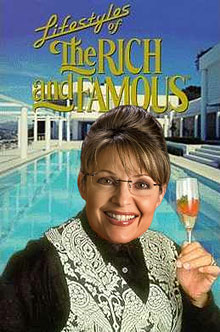 Sarah Palin is not running for President.

We apologize for bringing this up, but the chatter’s been unavoidable elsewhere this week, and we’re not above sharing our pain.

She gave up any fantasy of running — if she ever entertained it — on April 3, 2009, when she abdicated the throne of Alaska. Or, to use one those folksy expressions she loves to tweet: She quit.

Ain’t no way any opponent of hers would let that one slide.

Not only did she quit, she quit so she could make a shitload of money. Which she’s proving very successful at, thank you very much. And we know how much she and First Separatist love their shopping sprees.

It’s a good life. Why clutter it with responsibility? Been there, done that.

What confuses folks is that Palin earns her living these days as a Political Celebrity. And not just as a bog-standard wingnut mouthpiece. She’s not getting along as a Former Half-Term Governor, nor even as a Failed Vice Presidential Candidate. That would put her somewhere south of pre-massaged Al Gore on the totem pole. Can’t have that.

No, the role she plays is Potential Presidential Candidate. She rakes in the cash and the attention as a tease. Keep that story in play, and dinner is served.

And really, it’s not that hard. Hell, even Newt’s still at it, promising to announce his “intention” sometime next year. Newt’s not running either, of course, but hey, whatever pays the mortgage.

But what if Palin did run? Well, here’s the problem: She would lose.

No, not just to Obama. That’s a foregone conclusion.

The problem is that she would lose a primary. Any primary. Take yer pick. All it takes is one: One primary that demonstrates she’s not invincible, not universally beloved, not The People’s Choice.

And that’s bad for business: a business predicated on the notion that if she ran, America would surely follow. Palin may not harbor any fantasies that she would be a compelling candidate — we honestly think she’s shrewd enough to recognize that — but her business depends upon maintaining her celebrity, the cult of personality she stumbled into because Psychogeezer couldn’t have his beloved Droopy.

You can’t have Reality interfering with that.

Palin has at least until the night before the 2012 Iowa caucus to keep the tease fresh. Maybe even until the eve of the 2012 Republican convention. Draft Sarah!

And then? Well, there’s always 2016. After all, missed deadlines haven’t stopped predictions of the Second Coming.

She’s making out as a distraction of time, money and energy like a true reality star. Diverting resources from better candidates (whoever they might be.)

Like all celebutards, she’s going to have to deal with the ravages of time or the money train comes to a grinding halt. I suspect (but not all that much) that she’s got looks and she knows how to use it (probably since she was a kid) and they’re much all she’s got. It’s the source of her power among the “even stupider than her” base.

July 3, 2009. Remember it was the Friday afternoon before 4th of July weekend when she had that surreal “press conference” in front of the lake?

@ManchuCandidate: I wonder if girlfriend is banking any of this cash or spending it as fast as it’s coming in. I’d put my money on the latter. She’ll be hawking jewelry on QVC in ten yeas.

I see her as, in effect, playing The Donald’s role in some twisted version of Political Apprentice. That way she need do no work, only anoint or “fire” others more willing to do the scut work on the Republican Titanic.

On the other hand, the family life seems to be the Osmonds meet the Osbournes – show with real potential.

@SanFranLefty: Some Fox version of QVC, selling bomb shelters, oxycotin and gold, would be a good career path.

@SanFranLefty:
Considering the spending spree she’s been on, I agree.

Instant riches is more of a curse than a blessing as a lot of reality stars, athletes, lottery winners (75-80%) and dot com millionaires (I knew a few) end up in worse fiscal shape afterward.

a while back I agreed with you

I am changing my mind. I think she is very possibly running.

Caribou Barbie, Bachmann-Teabag Overdrive and Mann Coulter will form a “Sisterhood of Chaos” and try to activate the Annihilatrix.

@Capt Howdy: I don’t know about that. Give her time.

@Benedick: Or a fatal illness.