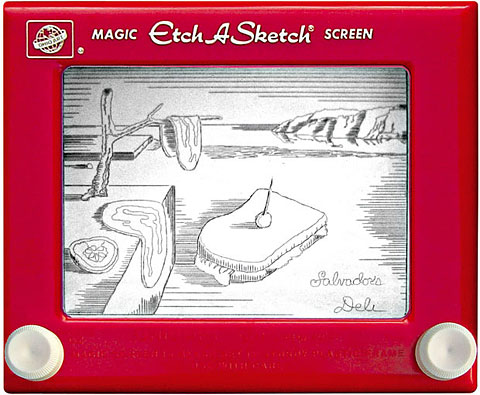 There’s more ugly news out there if you’re not yet sufficiently bummed, but Sandy Eggo is enjoying its first sunny day in more than a week (we’re deducting the overcast from the rent), and damn if we’re gonna let the happy-happy-joy-joy get away from us:

Today is the 50th anniversary of the Etch A Sketch. It was invented in the late 1950s by André Cassagnes, a Frenchman, who named it L’Ecran Magique (the magic screen). The Ohio Art Company bought the toy in 1959, renamed it Etch A Sketch, and launched it onto the American market on July 12, 1960.

That’s right: The Etch A Sketch is French. We’re calling it a Freedom Scribbler from now on.

Here’s something fun: LAS CRUCES, N.M. -A 47-year-old man’s friends set his prosthetic leg on fire after he lost a drinking bet, causing him to suffer severe burns to his buttocks and lower back. Dona Ana County sheriff’s deputies found the man naked on the side of U.S. Route 70 with his prosthetic leg in flames. Deputies learned that the man and his friends were drinking Monday and bet that whoever drank the least would be set on fire.
The man told investigators that at six beers, he drank the least, and agreed to let his friends set him on fire.
He said his friends ignited his prosthetic leg, and the flames spread to his body.
The sheriff’s office said the man took his clothes off because of the pain and his friends decided to take him to the hospital. But they got nervous and instead dropped him off on the side of the highway.
The man was taken to a Texas burn treatment center.
—
Information from: the Las Cruces Sun-News, http://www.lcsun-news.com/

his friends decided to take him to the hospital. But they got nervous and instead dropped him off on the side of the highway.

“friends”
a rather elastic term, no?

For the occasion, be sure to check out the fantastic work of the Etchasketchist. This is my personal favorite.

I am bummed they caught the Barefoot Bandit.

@Prommie: Left to die in flames, cast burning into the dust at the side of the road, to writhe in agony until his last. This is what America is all about.

@ManchuCandidate: We usually cower in fear and call in UFO reports.

@nojo:
I was going to guess that you guys would throw rocks at them

@FlyingChainSaw: To be fair they were all probably blind drunk.

We call it Le Etch a Sketch.

And I’ve had a perfectly wonderful day, thank you.

According to the so-called Republican wing of the Republican Party, Jan Brewer is too liberal.

@Prommie: This guy is great! We’ve got to see if we can get him on Stinque.com for a Q&A.

Fox pulls out Ted Nugent. We trot out the flaming amputee stunt man!

There’s an Etch-a-Sketch app for the iPad, if that makes anyone happyish.

@FlyingChainSaw: Was that really you on Ugly Foods? I didn’t reply yet cuz I wasn’t sure.

TJ/
EVERYONE I WORK WITH IS A MASSIVE PURPLE KNOB!!!!!

@Tommmcat Still Gets Carly Confused With Meg: You at work? And what’s a massive purple knob? The Nubby G?

A was thinking along the lines of an aubergine prick. You know, turgid, insistent, ugly.

ADD: Swollen to the point of pain, you know the type.

@Tommmcat Still Gets Carly Confused With Meg: If it makes you feel better, I no longer feel that way now that I’m an unemployed shut-in.

Right after your welcome lunch when you get your awesome new job (which is coming, sweetie, believe it) the feeling will begin to creep in. It always does.

@Tommmcat Still Gets Carly Confused With Meg: That can be a very good thing.

Sure, if I worked with Chorus Boys like you do.

You forgot the “stealing his wallet” part.

TJ/ Birthday trip to DC info in the clubhouse. Another Stinquer was born near my birthday, so it’s gonna be a double celebration! I have no money for booze. Just throwing that out there…

@Tommmcat Still Gets Carly Confused With Meg: I’m only doing this because I love you in spite of everything and perhaps you could use a boost. This is not a chorus boy but he’s almost as good-looking (no not me). I caution you all (stern wagging of finger) that this link is not only NSFW it is NSFS (Not SafeFor Straight) and is only posted here since Catt is in extreme need. And such as.

Mr. OA’s family is in town, and we were showing them around yesterday when we stepped off the monorail at Seattle Center and smack into Seattle’s Bastille Day celebrations. It was tres awesome, with wonderful food, performances, and attractive persons of both sexes parlaying Francais all over the place. There was even a car show of classic Citroens from the 60s and 70s in incredible like-new showroom condition, of which I have many snaps. No kissing booth, tho.

ALBUQUERQUE — Republican gubernatorial candidate Susana Martinez’s campaign spokesman has been fired because he was arrested for drunken driving.

State police arrested Shah for aggravated drunken driving early Sunday, not long after midnight, according to a spokesman for the Department of Public Safety.

Shah, 25, had recently moved to New Mexico to join the Martinez campaign. He previously had worked on a campaign in Connecticut and the Republican National Committee.

The Martinez campaign announced at the end of June that Shah had been added to the campaign staff.

@Original Andrew: Vraiment. I want him in all my shows. In fact I might start custom writing parts for him.

Lol. What CAN be be looking for with such a picture, I wonder?

ADD: He is awfully, ah, bright-eyed in that photo…

I remember Bastille Day at Florent in the meat-packing district in NYC, back in the day. They made a movie about it recently. Good times.

They are making documentaries about my youth, which means I am old.

@redmanlaw:
Whatever happened to “Been there, donethat”? From a libertarian point of view, what’s the big deal if there isn’t a traffic accident involved? He might have been a hazard to public safety, but no immediate harm done, no wrong done.

@FlyingChainSaw: Huzzah! Will respond appropriately once I’m though with this pity party I’m throwing at my joint.

@Tommmcat Still Gets Carly Confused With Meg: You might call it dewy and glistening. Shining, even. Like an upright beacon on guyswithiphones in the night. Broadway Bares indeed.

And I don’t care how old you are. I quite like you.

@Benedick: I peeked. But I didn’t peak.

@Benedick: Um. What’s going to happen to me if I click on that link? (Death is welcomed.)

@JNOV: You will be greatly rewarded. I think.

Related only by *not* being what the thread is looking for:

GOP Candidate: Obama And Carnahan Want To Take Away Your Chance To Find The Lord

*REALLY*? It’s not even 2011 and the “Obama will take away Jeebus” has already started? REALLY? WTF?

Oh, for the love of pete (peter?), its just a big curvy dick.

@JNOV: Darling, it’s guys being guys. You know how that is. Doesn’t matter if they’re straight or gay they’ve all got the inflatable widget and they all love to fiddle with it till it goes pop. Jr excepted, of course. I did try to warn you. This is serious show business and not for the faint of heart.

@mellbell: Or perhaps hugely? This is how I picture our own dear noje enjoying his Sarah Brightman’s Harem tour DVD.

Bite your tounge! No such thing!

“Just a dick” indeed. Is there such a thing as “just bewbies”?

@Tommmcat Still Gets Carly Confused With Meg: And yet one never hears about a “perky” dick. Or does one?

@Tommmcat Still Gets Carly Confused With Meg: I actually thought that one looked pretty darn perky.

Come to think of it, you’re right.

@TJ/ Jamie Sommers /TJ: This is one of Broadway’s hottest ‘rising’ stars. Can you say Finnean’s Rainbow?

He has teh gay, right? No straight guy would post a picture of his junk like that.

Nobody pays on their birthday.

He’s entirely out. Famously. I’ll stop now. He’s in Glee. Whatever that is.

Well, that’s a comfort in my old age, anyway.

@Benedick: He’s currently on 30 Rock, though a guest spot on the next season of Glee would make perfect sense.

@mellbell: I thought it was Glee. Is that different? He’s a BIG HARD fave in NYC.

@Tommmcat Still Gets Carly Confused With Meg: Actually, yeah. Straight guys pose like that as well.

I’d claw my way through an entire pack of mama grizzlies to get my hands on Joe Manganiello.

@Benedick: Wow. I never realized how serious show business is! Apologies for not appreciating the craft. I also never knew, well, I’ve never known that. ::faints::

@Original Andrew: How high would a quarter bounce?