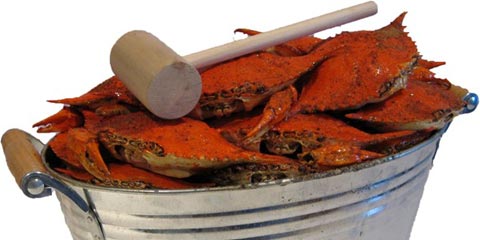 Back in philosophy days, one of our professors liked to talk about crabs. No, not those crabs. Real crabs. The kind that end up in a bucket when you’re hunting for them.

And the kind that stay in the bucket when you drop them in.

The deal about crabs wasn’t that they wouldn’t try to escape. Instead, if a crab got a mind to crawl out of the bucket, another crab would reach out and pull him back in.

Crabs, you see, didn’t want other crabs getting uppity.

We heard this story in the mid-Eighties, around the time Saint Ronnie was scolding po’ folk for being po’. It was their own damn fault, you see, and our responsibility as Conscientious Americans was to keep them in the bucket. If we lend them a hand — say, with financial assistance — well, we’re just making matters worse.

The purpose — all too evident, and all too successful — was to create resentment of the truly poor among the slightly less poor. Why should they get help when I’m busting my ass? The obvious solution — Hey, why not help everybody? — was obviously ignored.

It didn’t make sense at the time, and it didn’t make sense a decade later, when the concept got redressed as “workfare”. Nobody really cared about the plight of the poor in America. They just wanted an excuse to keep them that way, while pretending to offer them Tough Love. Starvation builds Character, you understand.

Well, America got used to treating the poor like shit, and we reached a new equilibrium in our disdain. Blaming the Victim was the new normal.

But that’s yesterday’s depressing news. Especially now that we have plenty of new victims to despise.

It began a few weeks ago, with Orrin Hatch demanding drug-testing for unemployment benefits. Then Rand Paul chimed in, saying the unemployed should just, y’know, get a job. And now closet Scientologist Sharron Angle has joined the chorus, saying unemployment benefits have “spoiled our citizenry”.

Add to that the assembled Republicans of the United States Congress, telling the unemployed they can go to hell.

Folks, this is a new moment in America. We’ve raised the bar. Not content to piss on the poor, we’re starting to piss on the unemployed, too. We’re trying as best we can to piss on the sick. And in a few years, we’ll be pissing on the elderly.

Because that’s the American Way. We’ve done this to ourselves, and we’re damn proud of it.

nojo
7:00 am • Thursday • July 1, 2010
comment »
Choose Your Delusion
That’s What You Get for Barhopping with John Boehner It Was a Dark and Thinly Disguised Roman à Clef
12 Comments
Benedick

I’m reading “It Can’t Happen Here” which sounds remarkably like Stinque. I wish this was something new but it has repeated over and over even in this country’s short history.

@Dave H: Yup, and it damn near turned us communist at one point…

Common trait of peasants, to resent those who try to get ahead. Hence the resentment of union workers and government workers and their vacations and pensions.

pissing on the elderly may not happen since they vote in large numbers.

Yep – that one’s a classic, likely to cause more than a little lost sleep.

BTW, good to see conservatives finally admitting what they *really* think. I almost want to get the book just to find out how, according to the cover, “the South had the moral high ground”. Because really, what says moral superiority and freedom better than holding an entire race of people in chattel slavery?

I have spooky mental powers. Who knew?

Breaking news: Lindsey Graham is NOT having an affair with Ricky Martin

Step back, boys, Beverly Leslie is free, sexy, and 54!

Wow – even by Internet standards, the Politico commenters are retarded. It’s like a less classy teabag-flavored version of /b/…