After a series of resignations, firings, and strikes, the French national soccer team ingloriously left South Africa this afternoon after losing to the host nation and scoring only one goal in three games at the World Cup.  Quite a ways for the 1998 champions and 2006 finalists to fall, but they had no business being there, as they were there by virtue of a player knocking in a goal with his hand in a qualifying game against Ireland.  Gallons of ink – both real and virtual – while be spilled in the coming weeks as the navel-gazing French determine what went wrong and the rest of the sporting world laughs at them.  SFL says that Karma is a bitch, you cheese-eating surrender monkeys, and apparently she’s Irish to boot.

On to happier notes, hot soccer players. The South African nation and team have been gracious hosts for the tournament, and their players have been exemplars on and off the field. While they didn’t qualify for the next round despite beating Les Bleu, they are proud of what they have accomplished.  Their captain, Steven Pienaar told The Guardian, “People can never say we didn’t do our best but through football we have brought the whole nation together. We have shown that we are one country and that’s all we need to say.”

And meet Katlego Mphela, their goal-scoring hottie. That’s him above scoring on the Frog goalie.

Sadly, no nekkid photos of him. 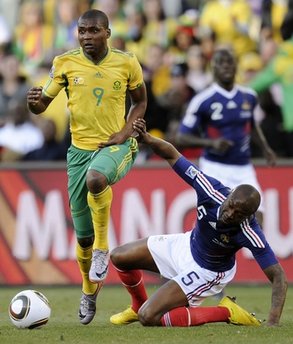 If you couldn’t figure it out, he’s #9, running away with the ball as the French player tries to pull him down. Fitting. Katlego, why the serious face?

I searched for pictures of crying French players or French fans per someone’s (Nabisco’s?) request, undoubtedly so we could mock them. All I could find was news articles about how the French fans at the game started cheering for South Africa and booing their own team, and that people watching the game on big screens in Paris were booing their own team.  Issues, folks, they got some issues to work on.

Instead, I found this sweet picture of some South African fans, upset that their team isn’t going on. No snarking on these two. And yes, for you non-Sport types, people really do care this much about the game. 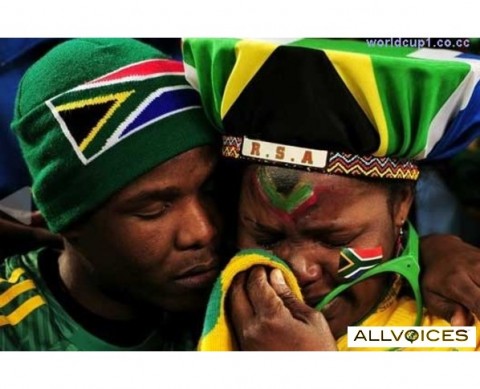 Hmmmm…once upon a time, I thought I saw Cristiano’s picture in the post roll at the top of the page. Again, I ask: am I losing it?

@JNOV: He was the very first one. Nojo changes those articles and header photos every couple days, if you hadn’t noticed…
@Nabisco: Yeah, half an hour with the shrink today kind of sucked my snark out of me. That or the Ativan.
ADD: Are you surprised the French switched sides?
/Phew, still some snark in me…

@SanFranLefty: Must find! I tried clicking on the link back when I saw him at the top of the page, but I received the “Sorry — we shot a blank” msg. I’ll hunt it down.

Waaah! It disappeared. I checked all the way back to April.

@SanFranLefty: You are SO AWESOME! I saw Glenn Beck and fled.

@SanFranLefty: These guys look underfed and scrawny to me. What, you want to be their Mom?

@SanFranLefty: You know we are still sending you warm, stinque bereavement hugs, dontcha?

@Dodgerblue: You and me both.

@Dodgerblue: Who, Katlego? He’s not scrawny. Not that there’s anything wrong with the wiry/lanky guys. Besides, you str8 boys would raise holy hell if I showed this fine piece of soccer beauty that is Cristiano Ronaldo day after day. (Scroll past Glen Beck to see perfection).

@Nabisco: Thx, doll. I saw and felt the Stinque love. Like I said there, my grieving had already been done. It was just the craziness that arose in the interim, including some behavior in the MIDDLE OF THE FUCKING MEMORIAL SERVICE that made me lose my shit. In a few days after I process what happened there I will share the whackadoodle story in the sandbox.

@SanFranLefty: Ah, family. There’s no event so solemn that some crazy relative can’t make an idiot of him/herself during it.

@Dodgerblue: The best part was that the crazy relative was not present in the room, but was 2000 miles and two time zones away and yet still managed to disrupt the event. Let’s just say this relative has earned a new entry in the DSM-IV next to Narcissistic Personality Disorder.

@SanFranLefty: Slightly OT, but I noticed something on a news feed the other day about Flippin’s new “randyness” diagnosis apparently making it into the new DSM, I shittheenot.

@SanFranLefty: Impressive. Playing in my mother’s league, I see.