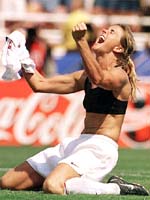 Alright, due to overwhelming bitching by the str8 boys about the Department of Lady-Bits’ objectification of the men in the World Cup Hottie of the Day series I’m running, today we’ll feature some World Cup ladies.

While I will do you boys a favor, I insist that there must be at least one photo of an actual athlete, therefore, I begin with the iconic image of Brandi Chastain in 1999 when the U.S. won the Women’s World Cup in a shoot-out.

World Cup WAGs and announcers after the jump.  What is a WAG? Well, I’ll explain that too.

A WAG is British tabloid speak for a footballers’ Wives and Girlfriends, originally used to refer to the English national team, but now expanded more globally.  Posh Spice, a.k.a. Victoria Beckham, the non-smiling skeletal wife of once-great player David Beckham, is their patron saint.  They’re generally known for their loutish behavior, ridiculous clothes and jewelry, and ability to spend money.

Posh is getting pushed out of the way, because WAG Numero Uno is Spanish reporter Sara Carbonero, who my second-favorite blog Kickette refers to as “Sara Pastasauce” and who men’s mag FHM recently named sexiest reporter in the world.  She’s covering the World Cup and is dating Spain’s goalkeeper, Iker Casillas (who is a hottie and will be featured another time). 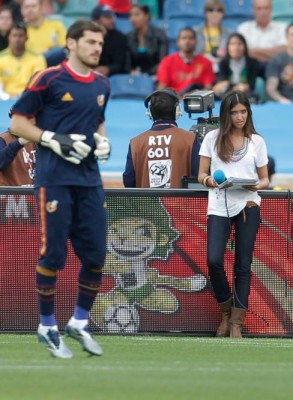 She interviewed him after Spain’s shocking loss to Switzerland, asking “How did you muck that up?” in reference to the sloppy goal scored on him. Casillas responded: “I don’t know what to say.”

Now the English tabloids are blaming Sara Pastasauce for Spain’s loss, saying that Iker was distracted with her standing on the side of the field during the game. Me, I’m distracted by those fugly-ass 1980s boots she’s wearing. When asked about her mind-controlling powers over one of the world’s best goalkeepers, Carbonero brushed it off:  “Can I destabilize the team? I think it is nonsense.”

Here’s another pick of Sara for you guys. Sadly, I couldn’t find any skimpy photos of her taking off her shirt at the end of a game. 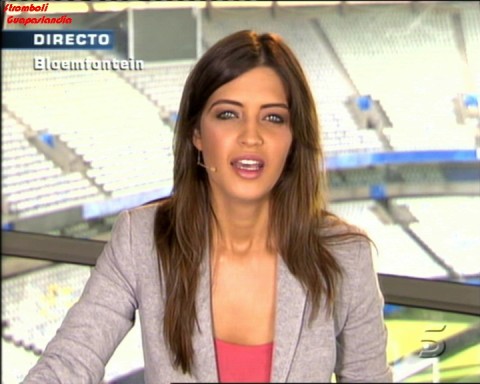 Ms. Pastasauce isn’t the only WAG being blamed for a shitty performance (no word yet if the ref from Mali who officiated the U.S.-Slovenia game will have his performance blamed on his WAG).  The other WAG in the news is actually an ex-WAG.

Elizabeth Minnett, a Canadian lingerie model, dumped the English goalkeeper, Robert Green, three days before the U.S.-England match in which Green bobbled an easy shot, resulting in a 1-1 tie.  The British tabloids are blaming Green’s anguish over the break-up with Ms. Minnett for the error. She looks like she’s from the Lindsay Lohan school of coked-out party girls, but here you go, boys: 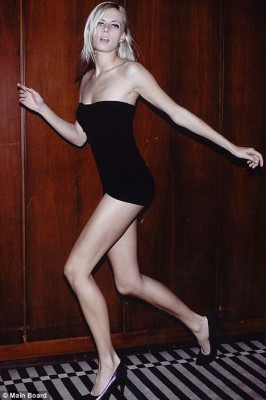 Green did not start in England’s match today against Algeria. Since the English tied the Algerians at nil-nil, it remains to be seen which WAG will be blamed for that loss.

Now, on to another reporter.

Meet Mayanti Langer, the Lotus Land sports anchor who has Nabeesko’s Banyan Tree all excited.  I can see why. She also looks like she’s barely 18, amirite? 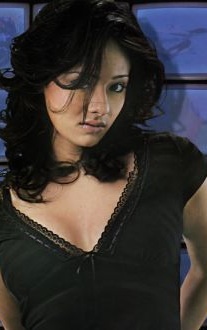 Finally, this fan pic is being run at the request of Dodger. I don’t get it, don’t cry for me Argentina, but whatevs, I’ll do it for him because of all his hard work going after polluters. Really Dodger? She could poke an eye out.   More female fan pics here. 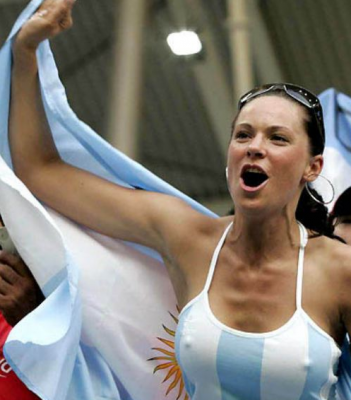 Oh, and here’s the World Cup Hottie of the Day for the rest of us from the game in which the U.S. was robbed:

Michael Bradley, who scored the second goal, and who was being bear-hugged from behind by a Slovenian player during the controversial play in which the ref called a non-existent foul on the U.S. and disallowed our third goal.  Bradley’s father is the coach of the U.S. team, and he has been criticized by his sometimes lackluster playing (as I was criticizing him minutes before his goal). But he scored a most beautiful goal.

We will return to our usual World Cup Hottie of the Day programming and objectifying of men tomorrow!

Can I just add that the pile-on of those hot soccer players at about :20 on the video has me all tingly?

The lady with the Macedonian flag has admirable tit-ons but where’re the gumby getters? Brandi? She took off her uniform and left the rest of her clothes on and didn’t even bother to have a long make-out session with her team-mates while being sprayed down in champagne.

It’s a mostly Asian thing. She’s got the Asian good skin genes that makes you look decades younger than you really are. My mom (and her sisters) has it as she looks like she’s 45 when she’s actually 68 years old.

To my sister’s disgust/dismay, mom passed that gene onto me.

Only drawback with that gene is that you’ve got to deal with bad acne between the age of 14-20 years old.

As for Minett. Meh.

Brandi will always be #1 in my heart …

@SanFranLefty: *sniff* I seek not bodhi for myself, but for the attainment of enlightenment by all y’all as well, such as.

p.s. Mayanti probably is closer to 18 in the pic you posted, but on screen she has matured, and given a few more years may approach fugly imo. But Sara Pastasalsero? Smoking…..

@blogenfreude: Bless you Bloggie. I agree. I met her a few months ago when she was working a soccer camp for Bay Area women’s soccer teams. (She plays/coaches the San Jose women’s team in the professional league). Nicest and most down to earth person you could imagine, and is still smoking the soccer pitch and rocking a hot body at 42.

@flippin eck: Oh, was my passive-aggressive showing? I thought it was subtle..

@Nabisco: Yeah, I’d hit Sara Pastasauce so hard there wouldn’t be anything left to wipe up in the bowl. She’s fucking H-A-W-T hawt. Caliente.

Is this soccer business over yet? ::taps foot::

@JNOV: Long march bicycle racing is still one of the most gripping Sporting Events on the planet, imho.

Beesko — they all dope. I don’t like that. I used to watch cycling until I was disabused of the notion that it’s a fair sport. Oh, and we just missed the Philly bike race.

Oh, wow. Those are some impressive nipples.

@JNOV: The soccer will never end. We are doomed.

@Benedick: Soccer is the BP of Sport.

@JNOV: settle down, you’ve still got your Phuckin Phillies <3

@Nabisco: Haha! And I was out of town for the Flyers’ loser parade and riot. I must coordinate my travels plans thusly from now on.

OH, IT’S YOU MOTHERFUCKING BIRTHDAY WHERE YOU ARE! Huzzah!

@JNOV: Hvala ti, but that was Slovenski, sestra (my grammar is really bad in Ma Nabisco tongue).

ADD: and I still have 30 minutes to get my 49 y.o. carcass to bed before it decomposes or I buy an iPad or whatever it is you do at 50.

So, let’s see. Subtract 2.5 hours from where I am, and replace the sun with the moon or vice versa. Yep, you’re right. You can tell time.