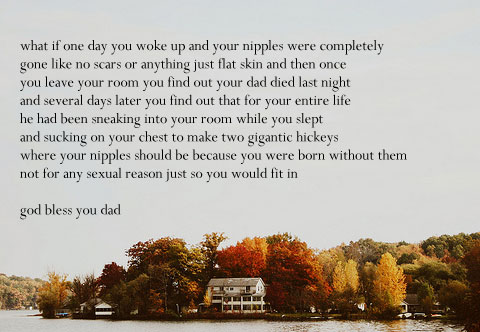 Hey, it was either this or a detailed explanation of why you have to nil your asynchronous NSURLConnection instance delegate when deallocing a view, lest the spare thread create a zombie and crash your app when it finishes its work in the background and discovers that its callback protocol left the building.

Because that’s what we spent Friday night thinking about.

nojo
7:00 am • Saturday • June 19, 2010
comment »
Choose Your Delusion
World Cup Hotties: Little Blue Pill Edition From the Files of “This Will Not End Well”
9 Comments
Benedick

Sometimes I wonder about you guys, you know?

@Tommmcat Still Gets Carly Confused With Meg: Yeah, I know what you mean. Why go to the trouble of subclassing NSURLConnection when you can just incorporate the protocol method in the calling thread?

@Tommmcat Still Gets Carly Confused With Meg:
i know eggsactly what you mean ‘catt.
let’s all reflect on the words of my stepmonster, who i’m never ever ever speaking to as long as i live, we are ALL “over her head, yet drug addled and demented” something like that. i would go to the wayback machine, but it scares me. for the first time i understand why some actors cannot watch themselves. if i go back and read what i wrote i would curl in a fetal position and suck my thumb.
anyway, when we’re bored, ask me to tell the tale of the monster and me screaming at each other in the hallway of bakette’s apt. quite a doozy.
i can’t decide which is more disturbing, that card or subclassing the NSURL connection.
and HAPPY BIRTHDAY TO BEESKO !!!!!!!!
and a happy fathers day all dads !!
i may send my dad the one here.
ShitMyDadSays
on bakettes 21st bday, he wrote to her, congratulations, you’re now older than your mother.

@baked: Thanks, Baked. I wish you all could have joined me in all or some of the following that I did to celebrateignore the half century mark: an hour at the gym, an hour and a half at the pool, and a two hour full body, deep tissue massage by my favorite muscle relaxer, Jeena.

Now, I’m looking inside the fridge: bachelor food, vodka and Red Bull. Where do I start?

ADD: Ma and the biscuits called me from their European redoubt, and sang to me as I was scalding in the tropical sun. Sadly, la Bisqueta was all sniffly and sad and didn’t want to talk, but I finally got her on the line and asked her to pretend that the next piece of chocolate she gets from her bube (they get literally kilos in the first week of any visit) is our “secret birthday cake” that only she and I know about. She brightened up a bit, and so did I.

@Nabisco: What are you, Tom Hanks? Thank you for making me cry.

PS. What kind of question is that? Vodka.

@baked: Darling, you always have a mom in me. So long as I don’t have to talk to the rest of the family. Bella and bakette excepted.