Grease Up the World Cup Hotties of the Day

Turn that BP-induced frown upside down, Stinquers, it’s time for the World Cup Hottie of the Day.

As soon as I saw that New Zealand’s Winston Reid stripped off his shirt in celebration of his goal, earning himself a yellow card, because it’s the first time ever the Kiwis have scored a point in a World Cup, I knew sight unseen he would be the Hottie of the Day.

Then I discovered that the All-Whites* love to take their shirts off. So in honor of their great achievement, bringing overwhelming joy at 2:30 in the morning to our funny-talking socialist cousins of the South Pacific, the entire New Zealand soccer team is hereby deemed the World Cup Hotties of the Day.

*Team’s nickname is not a reflection of the racial composition of the team – the rugby team is nicknamed the “All-Blacks” and the soccer team is the “All-Whites.”  Flying Chainsaw might be able to explain why. 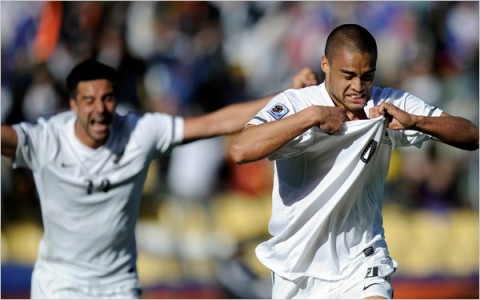 The All-Whites, all-topless and greased up: 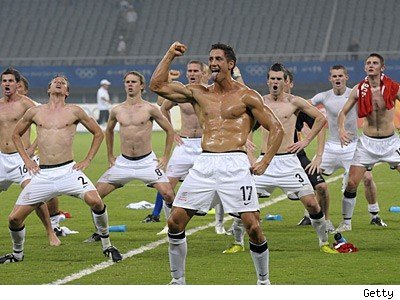 I think the anthropolical term for what those men are doing is called “phallic aggression”.

Where de white women at?

Please. It is to laugh. Mel Gibson wannabe. They are total ugh. Fucking stupid Sport boys.

I ‘spose Bachelor #17 is the hawtest overall, and he def gets bonus points as a graduate of the Gene Simmons School of Tongue Dexterity, butthisface! Oh well, that’s what the FSM created paper bags for.

Lefty, I totally called this.

@SFL: You don’t have to bury the initial Hottie pix after the jump. What I was objecting to the other day was a 750-pixel tall photo that consumed the entire visible homepage.

That second picture is either a Maori war dance or another of those “Thriller” dance things.

@nojo and SFL: I kind of like the initial Hottie pix coming after the jump — it’s like cracker jack, there’s a toy prize inside.

@nojo: I thought it was Bloggie doing that, and I was guilty of bandwidth hijacking or whatever it was. I like doing the teaser for the photo after the jump.
@redmanlaw: Yes, it’s a Maori war dance. The soccer and rugby teams do them before every match.
@Original Andrew: Darling, when that face and tongue is between your legs and that body is somewhere else, who cares if the eyes are a little cockeyed?

Didja see the season premiere of True Blood featuring Alexander Skarsgård in all his bare-nekkid glory?

@Original Andrew: No, what is that show? Why is everyone on I know on the Book of Faces yammering about it (except my soccer buddies)?

@ REDS @LEFTY
it looks like they’re doing the macarena.
or the chicken dance.