Since TommCatt was a little meh about Keisuke Honda of the Japanese national team being today’s World Cup Hottie of the Day, Stinque’s tireless soccer correspondent turned to other continents. While Cameroon’s Samuel Eto’o is definitely hawt and usually a terrific soccer player, his team collapsed against Japan.

Thus, SFL turns her lonely eyes to the Continent, where Holland, Sweden, and Italy offer an embarrassment of soccer hottie riches. At the end of the day, it’s the Italian team’s captain, Fabio Cannavaro, who wins today’s award.

The Italians were pretty terrible today against the low-ranked Paraguayans, despite Italy being the returning champs. Fabio is one of the oldest (36 years old) and shortest (5’9″) players in the World Cup, but he still kicks butt, and more importantly, he took his shirt off after the match even though there was a cold winter rain.

Oh, and he once posed with nothing but a soccer ball.  Somewhat NSFW after the jump. 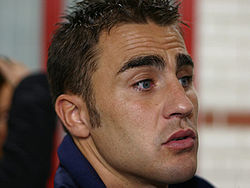 Unfortunately, the FIFA gods will not let me copy down the photo of Fabio taking off his shirt after today’s game against Paraguay. Well, actually they would, but Nojo said I’m not supposed to link to URLs as photos, but you can click here to see him shirtless today.

So feast your eyes on this: 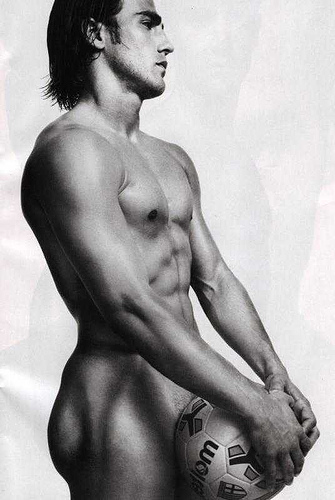 You know, I’m really beginning to enjoy Sport. Our friends at TLo are also contributing to the pretty.

Meh. The b&w is all tasteful and such, but his headshot looks like Joey from Friends. And not in a good way.

There’s always this memorable pic to keep the rest of us happy.

@nojo: Now they’re saying it was a 5.7. Not shabby.
There has been a whole bunch of craziness out on the Imperial Valley fault today. A certain someone’s pager kept going off with all the smaller quakes (go to quake.usgs.gov if you want to see the last 24 hours) and he just got a couple of calls from peeps in Sandy Eggo County wanting to know WTF is going on.
Make sure to tell them you felt it.

Who knows, maybe there’s precious lithium under the mountains outside of Calexico.

@Nabisco: Yep. Blank look in the eyes, like Matt LeBlanc.

@SanFranLefty: I do the feelgood form every time. Times seem to be more frequent lately.

@nojo: Check your time stamp. I blame it on Brandi Chastain.

@SanFranLefty: I’ve always been good about filling out the “have you felt it?”, from C.A. to Asia and now to lotus landia. Kathmandu is apparently riddled with faults, and due for a big’un.

@Nabisco and TJ/ Jamie Sommers /TJ: Jesus H. Christ on an Ak-Mak wafer, give me a fucking break, I was trying to crank this post out before it was midnight on the east coast. I later found better face shots of Fabio, though dude has some nice blue eyes. I’ll try to get an earlier start for the Tuesday post, though don’t count on it because I’ll be out of town most of the day for work. If you’re watching the games tomorrow (hint, Portugal, *cough* Ronaldo, plays as well as Brazil) feel free to send me some hawt player photos to make my evening work easier.

@Nabisco: My favorite part of that photo of Chastain is that she has the same farmer’s tan that every authentic soccer player has.

@Mistress Cynica: I can’t really post Ronaldo photos every day, as much as we’d like it. I don’t want to bore Nojo or make him mad at me.

@SanFranLefty: I’d like to meet some of these farmers you speak of. My favorite part? Her Adonis girdle personality.

For the record, and since I happened to notice, this is Stinque Post #2900. Carry on.

Greetings from St Petersburg, FLA. No earthquakes here, but they got hurricanes, and how people can live in this humidity, I don’t know. And I hope they are paying attention to global warming here — if sea levels in the Gulf rise 12 inches, this place is a goner.

mistress cyn, i too have an inexplicable new interest in Sport. WOWZA.
den mommy, you da best!

earthquakes, floods…the planet is so pissed at BP.
next up: frogs, boils and plague

@Dodgerblue: Well at least it’s not the heat.

I like your deployment of “FLA”, a nod to the old three letter state abbreviations (except MA., which was always Mass, or PA which was Penna., etc), but in caps to show you’re with it. Well-played, counselor.

@baked: There you are!

@nojo:
Saw it live on TV. Caught an inning of the Jays vs Padres game before passing out and saw the foul pole sway.

They can take their clothes off and clutch their balls but it’s still Sport.

And may I just say, y’all need to spend more time in the chorus dressing room.

@Nabisco:
beesko! i’ve been in a sulk, training a pup, and such as. have not felt like laughing. so good to be back. sprayed my screen with coffee already over “the mice had to be euthanized”

the puppeh bella, the latest addition to stinque’s critter family after silent creative cat, thor and zoe, is twice the size of the pic that was posted of her. she’s a baby monster. i got her in *large* part due to my damn kayak stolen right off my dock. she was to be “a breeze to groom, effortless to train, loves children and will protect her people and property like a lion!”she is not disappointing. i can dispose of the machete now, it was making my husband very very nervous. i’m smarter than lorena, he should know. i told him if he buys me this house, i’ll never mention IT again. he’s been talking to the owner……
work it smart ladies and gents, don’t waste a good payback !!! that sabra whore may turn out to be the best thing that ever happened to me!

@baked: you forgot to mention the six story statue of Jesus that was struck by lightning and burned to the ground.
And – puppeh photos?

@SanFranLefty:
oh lefty, who could even make this up? the best part is that the *faithful* are turning it into a pilgrimage. waiting for the resurrection i suppose?

last night comedy central had a “sunny in philly” marathon. one of the episodes was about a water stain the gang found in the bar that looked like everyone’s fave virgin mom. hilarity ensues when they seek to profit. i’m still shilling this show. it keels me!!! comedy central just picked it up, the first season is airing. set your tivo’s people!

what about ALVIN GREENE ??? i’m dying of glee from this.

puppeh pics forthcoming. can i send you a video? watching this 8 week old pup climbing the stairs is priceless.

yes, that’s part of my buyers pitch—this house will be underwater in 20 years.
the humidity is unbearable. i’m in a constant lather dashing into any water source when outside for 5 minutes including pulling out irrigation hoses to wear like a hat and sitting in the dirt like a godamn cactus. and my hair looks like diana fucking ross.
the precious baby is locked in daddy’s office with him. i have one last nerve from the little darling and the humidity today, can you tell?
re CRATE a definitive NO. my bed is her crate and that is that. but it works like a crate. she will not pee on it. there is an enormous creature growing in my bed. with feet like snowshoes.
going out now to socialize her. read: let other people amuse her while i drink lunch.

thanks
I needed that

One of the things they like to do as a favor to you is pee where you sleep. They are telling other animals that they will fight to keep them away from the den.

The crate is your friend. We got Thor used to it, and now he asks permission to sleep on the bed with us, and we let him. Eventually we took the crate downstairs and replaced it with a huge doggie bed, which is where he sleeps mostly now. Often, though, when he is just hanging around downstairs he will lie in his crate and chew on a dog toy or something.

They like the crate. The closeness of it is comforting to them. Also it keeps them from doing favors.

Just to correct a small bit of errata: From the size of Mr. Soccer Guy’s hands, I’d have to say that that particular Baby Jesus is nine pounds at least.

@baked: You don’t have to listen to me, darling, but you could listen to what Catt said about the crate since you believe anything any of your gay friends tell you over your own mother and you are not going out with your hair like that are you, sweetie?

@Tommmcat Still Gets Carly Confused With Meg: Good to hear. They do like crates. For some reason I thought you weren’t going to go that way.

It just took a while to get him used to it. We had to put him in it for half and hour, then take him out for a while, then put him back in, and gradually increase the time he stayed in it.

@Tommmcat Still Gets Carly Confused With Meg: We used to feed our dogs in their crate and put treats in it and made it comfortable. You know that puppy stage when they play themselves stupid and then crash? They crashed in their crate and loved having their own place. The attic here is full of them.

though i spoil a tad with food manners i.e. i will cave, but i am a strict crate person! you are preaching to the choir! i really do know what i’m doing here, a rare thing. i put treats–hot dogs!–in the crate. new toys, only in the crate! the crate is our friend i cooed to her. i staged a musical in it. she accepted it until she decided she didn’t and would scream literally like a stuck pig. she is bred to have her head on my foot right this minute. what could i do? waterboard her? you would do the same.
(sergio Loved his crate. he would go in and close the door behind him when annoyed by the cats) bella sees my bed as hers, and will sleep 12 hours through the night with no accidents, and its adorable. the problem will be down the road when bed space will become as rare as unscathed gulf coast beaches.
so i’ll spoon a mastiff for 10 years. sounds ok by me.

mum ! of course not! you have raised me better. what do you think all these hats are for? and i won’t mention a certain doxie that sleeps in someone’s closet.