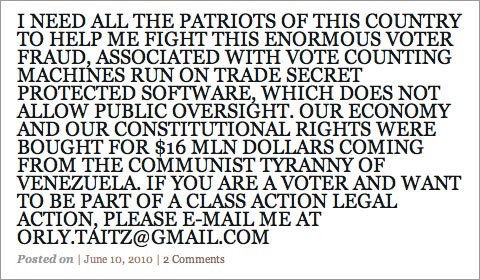 In light of what’s going down in South Carolina right now — with not one, not two, but three Demrat primary candidates suspected of being plants by a shadowy, wealthy political conspiracy — why do we choose instead to devote the morning post to failed California Secretary of State candidate Orly Taitz?

Because she’s adorable, that’s why.

And besides, with events moving so rapidly, we’ll probably have some fresh SC developments by the time we wake up.

how could we not have guessed? manchurian candidates tested in SC !

/smacks forehead, such as.

also: orly orly orly! aDORable. thanks nojo, NO one brings the carazee like our favorite lawyer/dentist!

At least Orly’s not deluded or anything…

It is starting to take a Nixonian turn in SC.
Seems to be a GOPer tradition of sorts. Have a huge lead then fuck it up by playing ratfucking games.

@JNOV: Orly is what the GOP is all about, its heart and soul!

I had her pegged as an “all caps” person

new and better trailer for our game

What’s all this about Oily Taints? Has the BP spill gotten personal?

these are my happy feet

seriously, I can not recommend these shoe highly enough. they are quite simply the greatest things evah.

The south carolina thing, I am sure it will come out that this was the work of The Ten.

@Capt Howdy: I simply love you for that shoe linky.

What do you suppose are the odds Orly has worked in yet another profession, at some point in her life, the oldest one, in fact. She gives off that vibe.

Do you all think Orly reads her own email? Should we all send her messages?
@Capt Howdy: Those shoes freak me out.

@SanFranLefty:
they are amazing. it is as close to barefoot as you can get with shoes on.@Prommie:
be careful about on line purchasing. they need to fit perfectly.

also, unfortunately, they are not cheap. the ones on my feet were almost a 100 bucks.

@Capt Howdy: Oh, yeah, you had a little link and comment about these Vibram footsies last week. I was surprised because I associate Vibram with replacement soles. (They’re a favorite of my cobbler. Sturdy.)

@Capt Howdy: They look like those chrome foot-shaped gas pedals from the early 70s, which were almost as cool as the “bro handshake” floor gearshift handles.

they are probably still around. I guess it wouldnt be the same.

scratch probably. I was about to google and typed in “foot shaped . . .”
it is the third selection.

heh
with “foot shaped shoes” being the first two

@Capt Howdy: You have to seize the moment. For one, I no longer have the Jeep.