Stinque
Home Latest Comments Log in
If it smells, we’re on it.
Stinque
Mastodon: @stinque@mas.to
A Thought At Bedtime, Sport 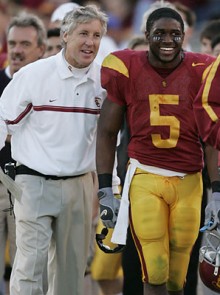 Sad news in the world of real, red-blooded football and not the wussy kind they are going to “celebrate” starting tomorrow: Los Angeles no longer has a professional football team.  The bill for University of Seventh Choice: bowl eligibility yanked, 2005 national championship trophy repossessed, scholarships cut drastically.  (“Scholarship.”  There’s a turn-of-phrase for you.  But anyway.)

Of course, Pete Carroll (l., with Reggie Bush) won’t be around for the downfall, in that he is now coaching the Seattle Seahawks.  He bravely hit the silk after last year’s disastrous season (complete with spanking at hands of Tree).

[Come to think of it, Mr. Bush didn’t fare too badly either, what with his fancy new ring courtesy of the Saints’ winning the Super Bowl in February.  Sadly, though, Reggie may become the second U$C tailback to be de-Hesimaned.  Impressive, when you think about it.]

But all that needs to be said, really: it couldn’t have happened to a more appropriate set of bastards.

Heaven forbid the players should get a cut of the cash that schools and coaches are raking in.

@nojo: Agreed. It’s not as if they go to school for an education or anything.

Why doesn’t the NCAA just jettison the whole idea of scholarships, give players a cut depending on performance measures, and save scholarship money for minoritymy kids.

@Nabisco: Even at Oregon, they’re dealing with multimillion-dollar contracts in the AD. But hey, Nike keeps planting fresh buildings on campus.

@nojo: it was more of a “what contract?” issue with Bellotti that had everyone pissed off.

This all happened because Bush was too arrogant or stupid to pay off the men who furnished him and his family when he didn’t go for their sports marketing agency — then they ratted to the NCAA.

@Signal to Noise: Well, that too. But non-AD campus sources aren’t too happy about the new Crystal Palace, either.

Does anyone know–or care–why the Big 12 is suddenly disintegrating? All of a sudden I’m hearing OU and Texas will be in the PAC 10. WTF?

I admire CB for hating the ToeJams as much as I do.

@Mistress Cynica: TV money, I believe. It’s not like any Pac-10 fans that I know want schools from the cow-pie states to join us.

Mistress Cynica: The quickest answer is teh munnie.

Big Ten (erm, eleven) is making boffo bucks off of its new TV network, which it splits amongst all members. It wants to have a championship game (which for some reason they can’t have with an 11-team league), and the TV dollars that brings in. Nebraska wants a cut, and also wants more East Coast / Midwest exposure than it gets from the Plains. So they jump.

This makes a Big 12 (now eleven) championship game impossible (for, again, some strange reason). This scares the bejeezus out of Texas and Oklahoma. Pac-10 (championship gameless, oddly) is the most rational location (SEC is full). Texas and Oklahoma bailing means that the rest of the league (Colorado, Texas Tech, etc.) have lost their reason for being in the Big 12 (games against Texas, Oklahoma, Nebraska). And so they bail out too.

@chicago bureau: Maybe I’m old-school here, but I wish they had never gotten rid of the Southwest Conference. If nothing else, Rice got to pull the occasional crazy upset of UT or A&M.
Query: If he gets de-Heismanized, does that mean the 04-05 runner-up gets the award?
And re: your post, couldn’t have happened to a nicer bunch of $poiled Children.

And – Mexico and South Africa kick off in 45 minutes – Ole!

@SanFranLefty: I’m watching it live, and wondering where CB’s liveblog post is?

Ed note: Nabisco sat midfield at the opening of Seoul/Tokyo Cup in ’02, for Senegal’s upset of the Franch.

@Nabisco: I can’t get the game to stream from ESPN3.com or BBC’s website. Why do I have to work, damn it?

Given the Troubles in Arizona, can we go back to the Pac-8? You know, the Pacific states.

@chicago bureau: Welcome back–I’m glad you’re not dead or anything! Did you partake in the parade this morning?

@flippin eck: Yes, yes. The parade was awesome. Of course, there was tedium. I mean, two-and-a-half hours standing around doing nothing useful, five minutes of pure unadulterated joy, and a let-down feeling edged off with a cigarette afterwards. Just like a night at a pick-up bar. (Rimshot!)

Explanation of absence: during the playoffs, there was a game every other night that was make-or-break. It was a little draining to go through that for TWO MONTHS. Payoff was solid, of course.

@SanFranLefty: Vince Young was first runner-up the year Bush won, and he has already said he doesn’t want the trophy.