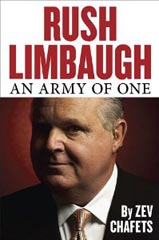 Title: “Rush Limbaugh: An Army of One”

Blurb: “While Limbaugh’s public persona is instantly recognizable, his background and private life are often misunderstood.”

Review: “Chafets is a relentless defender of Limbaugh, even to the point of insulting his ex-wife Marta Fitzgerald as a gold digger. He writes that Rush’s first two wives didn’t marry him for his money, but ‘The third Mrs. Limbaugh is a different matter.'”

Footnote: Jury’s out on the fourth Mrs. Limbaugh, although we can’t imagine why a 33-year-old woman would marry a 59-year-old wealthy fat fuck for anything but love.

Rush Limbaugh: An Army of One [Amazon]

nojo
7:00 am • Sunday • June 6, 2010
comment »
Choose Your Delusion
Who Could Have Predicted … How the Oil Might Move
6 Comments
ManchuCandidate

If that Army of One was made up of the Stay Puft Marshmallow man.

I can’t believe mine wasn’t even in the running. Their choice is nowhere as interesting as “Fucking DIE, Rush, and Suck Cock in HELL!” What’s wrong with these people?

@blogenfreude: Totally lamed out on that one. It was prolly not even a distraction. “Feliz Matrimonio” would have been subtle, felicitous but with a little picante. “Where’s the marriage certificate?” would have been very, very good.

@FlyingChainSaw: That’s what we planned to be on the wedding cake, right?

“… While a senior in high school, Rush became infatuated with Dolores Haze, daughter of a wealthy supporter of the local Democrat Party. Dolores, however, lost no time in telling him that she preferred football hero Scotty Bing over young Rush, having heard from her friend Mavis Ornt that the future talk-jock’s virile member was the exact size and shape of a champagne cork when erect and was consequently of no use to anyone but himself. To console the heartbroken teen, never guessing the kind of impact her words would make on her large-boned son, Lottie Limbaugh opened his eyes to the fact that Republican women were more concerned with what a man had in his bank than his pants. Though his father, it seems, had struck out there, too. Inspired, the young hero sought out others like himself with tiny dicks and big appetites. It was on one of their outings to the local slaughter-house that Rush met Georgette Minge whose flame-red hair would come to haunt his dreams…”

@Nabisco: No, the cake would have said, “Fucking Choke the Fuck on it, Asshole, Die and Suck Cock in Hell!”