The President of Our Dreams 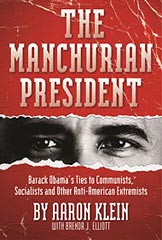 Blurb: “The book uncovers a far-leftist, anti-American nexus that has been instrumental in not only helping build Obama’s political career but in securing his presidency.”

Review: “After reading, ‘The Manchurian President’, you may still wonder how America could have possibly elected BHO, but you won’t wonder why he acts like a marxist through his public policy. The truth is, he’s been around marxism and socialism his entire life, and his policy reflects this stunning truth.”

Footnote: The president wingnuts complain about sounds a lot better than the one we have.

nojo
7:00 am • Sunday • May 9, 2010
comment »
Choose Your Delusion
Just Shoot Me Here It Comes
5 Comments
ManchuCandidate

In certain ways, Barry’s been more a manchurian candidate against the “left” not for the “left.”

A black guy helps give US America mild healthcare reform and now he’s the greatest threat to the US America way unlike say a white preznit who ignored a terrorist plot, plunging US America into two miserable wars, allowing Wall St to plunder the treasury, give tax cuts to the rich and cripple the GOP would be more of a Manchurian Candidate but what the hell do I know?

Life according to wingnuts: it’s better to be really screwed over by a white guy than it is to be slightly helped by a black guy.

My sister decided to conveniently slip out of town (she claims it’s school, but I say otherwise) so I have to be the Hallmark Day planner and chauffeur.

Since I owe her big for taking care of me for 3 weeks post op, I’m taking her and dad to a nice (and rather expensive) Dim Sum place for Hallmark Day lunch/brunch.

For wingnuts, Bush’s stuff was OK because Jeebus told him to do it. :)

Unrelated: the ad-bots are now terribly confused. My ads on the front page were:

(1) “BrooklynPorkStore.com”: I *hope* these are triggered by the food pr0n, but the name sounds like some sort of dodgy escort service…

(2) The amazon links are for “Burn Notice”, “ALF” and “Cyrano de Bergerac”. Only on Stinque would those three bear any relation to one another. :)

@ManchuCandidate: I surprised Moms Nabisco with a call on Skype, and it was remarkably free of chit chat about her cats’ health and the weather.

@al2o3cr: Meant to thank you for the Milkmen video the other day. Bitchin’ Camaro!

Lunch went well. Apparently, Dim Sum prevents talk of getting married to a proper Korean girl although I admit to cringing when my dad had some chicken feet…