Quote for the Day 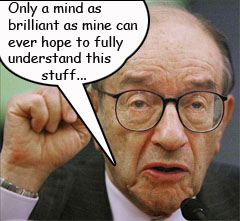 Hubris is one thing, but this is something altogether different… hubris, coupled with arrogance and an unbelievable contempt for the great unwashed masses that can’t possibly understand the things you do and so must be kept in the dark (lest they do themselves harm, you understand).

In 2004 a debate raged inside the Federal Reserve as to whether the U.S. was entering a dangerous housing bubble. Alan Greenspan’s response? Such discussions had to be suppressed. No word of these concerns should leave the ivory confines of the Federal Reserve. The natives, you see, just wouldn’t understand…

We run the risk, by laying out the pros and cons of a particular argument, of inducing people to join in on the debate, and in this regard it is possible to lose control of a process that only we fully understand.

Of course, in retrospect, the most absurd aspect thing about this quote is that Greenspan was worried he might “lose control” of something as irrationally driven and wildly out-of-control as an economic bubble. Was his “understanding” really any different from that of a witch doctor ordering virgins to be thrown into the mouth of a volcano, worried that if he should offend the gods by not doing so, the mountain will erupt?

Greenspan is going to go down in history as one of the villains of this era. Mark my words.

He is the Albert Fall of our generation, minus the cabinet post and paper trail.

Greenspan and his gang of half ‘tarded hobbits didn’t exactly have a good understanding of the mess either akin to saying “The economic failure was caused by demons.”

@Tommmcatt Loves The Giant Floating Head:
I agree. Should be mocked and harshly judged.

Parts of the US were completely off their moorings by the mid-1990s. Having this debate in 2004 just shows to go you how fucked the Fed really is. Someone needs to kick Greenspan to death and take a shit on his face.

You’re supposed to take away the punchbowl, not dive into it.

If I might add: I’ve recently been reading up on the “Austrian School” of economics and its enthusiasts, and yes, they do strike me as modern day witch-doctors whose religion is a peculiar economic doctrine that eschews empirical validation in favor of a vaguely Kantian approach grounded in a-priori principles and “pure reason.”

Proof positive that Ayn Rand was full of shit. Ron Paul and Rand Paul should be dismissed with merely half a wave of the hand.

@FlyingChainSaw: As per your advice I am finally able to move my pathetic IRA account away from BoA to my credit union. Had I had any lingering doubts the fact that my ‘financial adviser’ at BoA had no clue how to effect the transfer scotched them real fast.

@Serolf Divad: Ah, the Austrian School. The fucking bane of my existence because of my god-damned teabagger cousins. Any reading recommendations would be appreciated, since I never have any idea what the hell they are talking about.

As my daughter would say, Greenspan didn’t know bupkis from bupkis.

I’ve mostly just googled some critiques. For my money here’s the essential info: Austrian school economists eschew mathematical models of their theories that can be subject to empirical verification. To me that makes Austrian school economics much more of an ideology than a serious attempt to understand and explain the “real world.” When an economic event occurs an Austrian economist does not ask himself “does this event confirm or falsify my theories and models?” Instead he asks himself “how do my theories explain this event?” And what follows is an ex-post facto development of a narrative that ties the events to the Austrian idea of infallible markets. When a bubble is created and pops, to disastrous consequences the Austrian economist would not deign to blame market actors. Instead he finds some form of non-market intervention to blame. Thus, in the most recent bubble, Austrian school economists all blame the Fed for keeping interest rates low for too long.