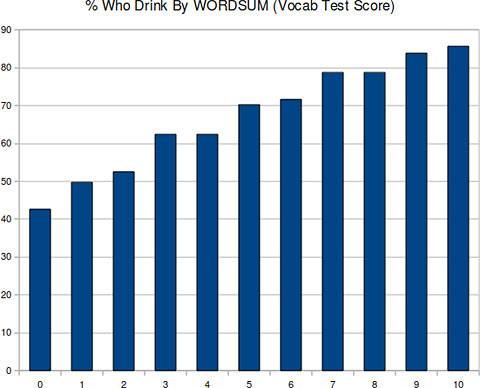 Playing a hunch, Razib Khan futzes with the General Social Survey and discovers what we all knew about the relationship between alcohol and awesomely smart people like us:

I was expecting it. That is, that the more intelligent, who scored high on a vocabulary test, would drink more than the dumb, who scored low.

New Englanders can drink the rest of us under the table, by the way. And Catholics? Don’t get them started.

Khan includes other charts for study, if you’re sober enough to view them. And he doesn’t sign off before providing a scientific basis for the Darwin Awards:

It’s just a fact that stupid people tend to die earlier, because they often make life decisions in keeping with their nature.

Unfortunately, that also goes for countries.

nojo
4:30 pm • Monday • May 3, 2010
comment »
Choose Your Delusion
Ummm, Carly? One in Three Californians is Latino Quote for the Day
10 Comments
SanFranLefty

It’s your move in our Scrabble game, baked.

Which reminds me. I’m out of vodka.

@SanFranLefty: who has the Q?

A popular if highly speculative theory that’s emerged, and that officials are looking into, is that Comedy Central’s South Park is to blame. Despite little evidence, proponents of this theory suggest that Islamic terrorists who threatened retribution after the controversial cartoon series depicted the prophet Muhammad in a manner they considered blasphemous may have attempted their revenge—and point to the fact that the explosive-packed SUV was parked near the headquarters for Viacom, which owns Comedy Central.

@Mistress Cynica: I like the “despite little evidence” part. I think the Lion King Conspiracy has more legs.

Oh, and the “Islamic” dude who made Comedy Central wet their pants? I can’t find the link right now, but apparently he’s an American whiteboy convert.

@Dodgerblue: I have Q, it’s my last remaining tile. Someone (you!) had all the Us, though.

anyone watch NatGeo last night? they had a neo-natzi hate marathon on.
i heard more seig heils than a best of chainsaw book. very depressing and scary. but jon made it all better, as always.
i looked into ratbastards pale green eyes and asked “aren’t we white?”
apparently not.

@baked: I thought vixen was my word. Anyway, game is on.

@SanFranLefty:
great…
vixen was your word, you know i’m as confused as benedick.