My Other Truck is on Concrete Blocks 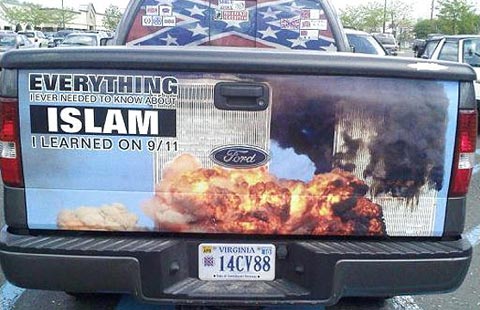 But he got more than he bargained for when a photo of his pickup went viral on the Web last week. Motorists and Muslim groups complained that his Virginia vanity license plate — 14CV88 — was really code for neo-Nazi, white supremacist sentiments. The state Department of Motor Vehicles voted last week to recall Story’s plates and force him to buy new ones.

“There is absolutely no way I’d have anything to do with Hitler or Nazis,” Story said Wednesday… “My sister-in-law and my niece are Jewish. I went to my niece’s bat mitzvah when she turned 13 three years ago. Does that sound like something an anti-Semite would do?”

It’s true: While the Venn diagram of anti-Semites and Raging Assholes does show significant overlap, you can be the latter without the former. And that neo-Nazi “1488” reference is an innocent mistake — NASCAR’s Tony Stewart drives #14, while Dale Earnhardt Jr. handles #88.

Oh, and the CV? “Sons of Confederate Veterans”. Great-great-great-grandpappy fought valiantly for the slavedrivers. 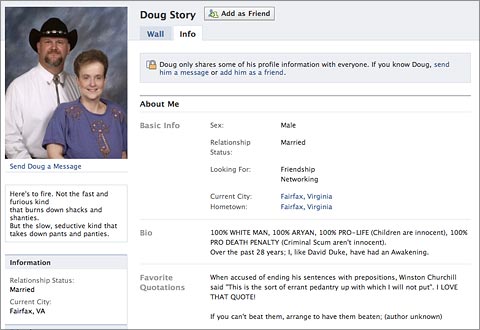 Over the past 28 years; I, like David Duke, have had an Awakening.

Everything I ever needed to know about Christianity, I learned during the Crusades.

Like Sarah Palin, the CSA came in second in their contest.

Of course he blows his defense when his PUBLIC FB page sez otherwise linking to various White Power sites.

We should all be thankful that supremacists (of all stripes) are the dumbest.

@IanJ: The Inquisition was pretty revealing, too.

@ManchuCandidate: I think that merits an update.

@Mistress Cynica: I was trying to keep it snappy. The Inquisition would have been a fine choice, too. Or any of a variety of other atrocities.

BTW to our Christian fellow Stinquers, this is not what I actually think of Christianity, in case there was any confusion on that point. ;)

That little paean to fire makes me want to throw up for some reason.

Profile says went to Lincoln High School and loves the banjo.
He begs for ridicule.

Well, besides being a Mafia Wars addict, he likes poetry

Here’s to fire. Not the fast and furious kind
that burns down shacks and shanties.
But the slow, seductive kind that
takes down pants and panties.

But I can’t join, because it’s ‘for whites, by whites.”

@JNOV: the mental image of him whispering that in the ear of the woman in the photo with him is too much when i’m trying to have a late lunch…

OMG! These folks are really confused:

# We demand the nationalization of all businesses which have been formed into corporations (trusts).

# We demand economic reform suitable to our national requirements;

The prohibition of pro-marxist unions and their supplantation with National Socialist trade unions;

The passing of a law instituting profit-sharing in large industrial enterprises;

The creation of a livable wage;

The restructuring of social security and welfare to include drug testing for welfare recipients;

The immediate discontinuation of all taxes on things of life’s necessity, such as food, clothing, shelter, medicine etc.:

The replacement of the current tax system with a flat-rate tax based on income.

# We demand the treasonable system of health care be completely revolutionized.

We demand an end to the status quo in which people die or rot away from lack of proper treatment due to the failure of their medical coverage, Health Maintenance Organization, or insurance policy.

We further demand the extensive development of insurance for old age and that prescription drugs be made both affordable and accessible.

I think it’s about here where I should mention a bit of text I excised from the WaPo excerpt:

He contacted The Washington Post after an article about his plate appeared last week; the state, citing privacy rules, had declined to release the identity of the plate’s owner.

Dude. You could have let it blow over. But noooooo……

That FB page is such a howler, some folks are wondering whether it’s fake. But his Wall has posts going back to at least March 17 (I gave up after that), his truck went viral last week, and his name only became public today.

This much is certain: The Doug on Facebook is the same Doug at Patriotic Resistance, which he joined on August 22, 2009.

He and his wife are exactly what I pictured them to be in my head, except I had him with about 30 pounds more beer gut.

Oh, we’ll rue the day we took notice of this garden variety proud white southern male. He’ll be the “victim of the liberal-jew-commie-lamestream media conspiracy” of the month, he’ll be on Glenn Beck tomorrow, he’ll start appearing at teabagger rallies as Doug the Downtrodden, giving a speach which can be paraphrased thusly: “Come see the oppression thats inherent in the system, this is what I have been going on about, look, I am being oppressed.” Then he will be Palin’s VP in 2012.

Self-pity and victimhood are like crystal meth to these people, they live for it, there is nothing more empowering to a poor downtrodden white male than to become a victim of the Joooz and the media and the freedom-hatin’ commie liberal progressive socialist nazis.

@nojo: And poor wittle wacist guy, his employer, the GOVERNMENT AGENCY Virginia Department of Transportation, made him peel off the 9-11 thing on his truck if he wanted to park in the agency’s lot. Confederate flag is okay, apparently.

Doug Story Y’know, it just struck me, all the “change” Obama’s been talking about since he was a Candidate. Seems to me that Cuba had the same kind of “Change” back in 1959 when the commies took over. In the movie “Red Dawn”, Russia invaded the US, except now the threat is coming from the White House’s own commie. Matters not, re…al Americans will take our Country back – be it by election (not my preference) or be it by force.
See More
April 8 at 5:28pm · View Feedback (2)Hide Feedback (2)
Eric Story
Eric Story
You’re on a government watch list aren’t you?
April 8 at 8:54pm
Doug Story
Doug Story
Dunno, maybe, and if I am, let ’em come, it’ll be a bloodbath! I can guarantee I won’t survive, but I’ll take more than just a handful with me.
April 9 at 7:36pm

@SanFranLefty: And keep the government’s hands off his Social Security!

Meanwhile, only in America would medical expenses drive a guy in Nojo’s homeland to sell advertising space on his urn.

@blogenfreude: His wife is on disability.

@JNOV: And if he got canned he’d be on the dole that very day.

@JNOV: My neighbor is an SSA ALJ. He makes sure those who need it get what they are entitled to under the law. He and his wife are fun to hang with for a few drinx and talking politics. She used to be the county Democratic chair back in the ancestral home so we go back a ways. She was the second Reformist we put in there after our revolution that made all the hacks, speed dealers and knife fighters lie low for a while, but they’re back now to the point where the state is ready to take over the local school board.

@JNOV: And another question – did fat boy serve in the military?

THEY want to discuss aliens? they both look exactly like they just landed here from the death star. picture vincent d’nonfrio in men in black with the pug.
this is only insulting to retarded people, but look at that woman…total fucking retard.

@SanFranLefty:
remember the hoopla over the woman selling ad space on her forehead?
she almost broke ebay.

@JNOV:
thanks for the research. i don’t care how many bat mitvahs he went to,
scratch an aryan, and you’ll find someone who hates blacks, jews and homos. the standard trifecta. such a sweet story about his niece…maybe he doesn’t want to get on the bad side of the jewish owners of all media during this sensitive time in his blossoming political career.

There is so much to laugh at about this guy, it hardly seems sporting. It would be like Michael Jordan playing basketball against a 10 year old child.

Noticed that his Facebook page was taken down. Guess the 100% white male is actually a big pussy.

@Qunt: On behalf of Vagina-Americans, I remind you that pussies are tough. A pussy can take a pounding and push out an eight pound baby. He’s a fragile ball-sack.

@SanFranLefty: Here’s a thread jack that I know something about.