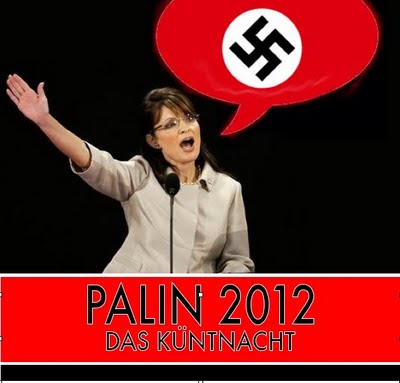 Frank Rich did the math in his column today and concluded that four of the Democratic congress members slated for elimination on the Talibunny’s death list have been subject to some kind of physical attack or death threat, an indication of the neofascist pin-up’s potency in driving the wingtard base to act on its most primitive impulses.

The night-scope-style crosshair targets indicate the districts of congress members that voted for health insurance reform. The list was obviously drawn up by the Talibunny to inspire her mouth-breathing minions to kill Democratic congress members, a Jodie Foster-power broadside beamed out to millions of John Hinckley, Jrs. The chick has gone over the line from inciting race riots to targeting assassinations.

Here’s who the Talibunny almost got taken out so far:

The Charlottesville Daily Progress reports: U.S. Rep. Tom Perriello’s brother received a threatening letter in the mail on the same day that someone apparently severed a gas line at the home in Ivy. (Two conservative Tea Party activists posted the address of the home on the Internet on Monday, mistakenly believing it was the home of the congressman. One of the activists urged others to “drop by” and “express their thanks” for Perriello’s vote in favor of health care reform.)

The Talking Points Memo reports: Rep. Kathy Dahlkemper says she has received “threatening communication” she believes is tied to her vote in support of health care reform. Dahlkemper released a statement to reporters today detailing multiple “emails, letters, faxes and phone calls that are threatening or menacing in nature as a result of my vote in favor of health care reform.”

The Arizona Daily Star reports: The front door was smashed out at Congresswoman Gabrielle Giffords’ congressional office last night. . .  While the calls into the office in the past week were “more nasty and rude” and laced with profanity than the office had ever received before, Karamargin said, they did not reach the level of threat that prompted any police involvement. Throughout all of the protests over the past several weeks as the health care proposal entered its final push, the office was often full of people — many vehemently opposed to the health care proposal — but this incident was the first involving any vandalism.

The Denver Post reports: U.S. Rep. Betsy Markey of Fort Collins and other Democrats nationwide have reported receiving threats or had offices vandalized in the days before and after passage of sweeping health care legislation.

While minority leader John Boenher went on TV to shrug that mass murder probably wasn’t nice, no matter how just, the Talibunny was, of course, non-repentant. In fact, she was aroused by the blood-thirsty response of her toothless hoard of illiterates and meth heads.

On the 23rd of March, she sat down to urge on her legion of losers: “Don’t Retreat, Instead – RELOAD!” Pls see my Facebook page.

What will it take for the Secret Service to pay the neofascist a visit? Will Talibunny have to hand out guns to her fucktard legionnaires with addresses of Congress members? None of the language she is using is expressive enough to be called metaphorical. Talibunny don’t good talk that much.

OBL would be proud of her.

Saw some Tea Party idiot on MSNBC claiming that: 1) racist signs at rallies were false flag; and 2) the racists at the rallies aren’t members of the Tea Party …. I mean shit – that’s their central organizing principle … there’s a black man in the White House who’s going to take your shit and give it to brown people.

I’m about to start Richard Evans’ book The Coming Of The Third Reich. Should be some interesting parallels there.

@Dodgerblue: The parallel I’m fearing is the OKC bombing, 15 years ago this April 19. I was three blocks away from it, and a window was blown in on me (I wasn’t hurt). I knew people who were injured, who died, who lost children in the day care center there. I can’t even snark about this because I am so concerned–the selectively chosen “patriotic” crap these people recite is basically the same things McVeigh wrote and said. Yes, if they do something crazy, it will reflect badly on Talibunny and the Republicans, but innocent people will suffer for it.

Did you kids see this?

@karen marie: Did you see Nugent roll his eyes when Cavuto tried to pretend he did not mean ‘kill Obama and all democrats’ when he shrieked ‘kill the pigs’ ?

@Mistress Cynica: I’m quite worried about bad shit happening on the 19th.

@SanFranLefty: Talibunny, Boehner and RNC insiders probably already know where the bombs are going off and the likely body count. Press releases have likely already been written, condemning Obama for allowing America to come under attack and demanding his resignation. That is, if they plan isn’t for vaporizing the White House with Obama in it.

@FlyingChainSaw: I don’t think they’re going to try to make it look like a foreign attack. Yesterday I walked by the Jewish Community Foundation offices and noted as I do every time I walk by how fortified the building is (complete with those barriers that keep someone from driving a car up on the sidewalk), and remarked to Mr. SFL that it’s a sad statement on society that they have to fortify themselves like that. But I’m quite concerned that any freakshow frothing teabagger will not go after Barry and Plugz because it’s too hard, and Nancy’s office is well-guarded, but it’s soft targets that aren’t prepared like the JCF is. I could see them going for soft targets like the LGBT Center, a Latino community center, the ghey bars at Castro and 18th, or something like that. The Murrah Building’s day care center was a soft target. I hate that I worry about stuff like this happening.

@SanFranLefty: Oh, no, I am sure when the dust clears on the 20th they want to point out that ‘Americans have been driven to insanity by the depthless evil of demrats! Patriots have no choice but to attack the enemies of America!’ and drive the neonazis into the streets, guns ablazing.

@SanFranLefty:
lefty, we had those concrete barriers surrounding my neighborhood in jerusalem. at first, i thought they were horse posts, like you see all over historic philly. then i saw them at the israeli consulate in miami when i was making aliyah.
cue: louis armstrong…what a wonderful world.

@baked: The concrete sidewalk barriers started going up after the OKC bombing, although McVeigh was parked out on the street.

@redmanlaw: The new Federal Building in OKC was built with a large plaza full of barriers disguised as “sculpture” in front of it. The rear of the glass building is right on the street that runs behind it. Because apparently terrorists always go to the front door.

@Mistress Cynica: If the punters can’t see the damage, it doesn’t count for Terruh Value. Or something.