Stinque
Home Latest Comments Log in
If it smells, we’re on it.
Stinque
Assholes, they do vex us.
Brushes with Fame

What’s This Country Coming to When a Patriot Can’t Call for Shooting the President? 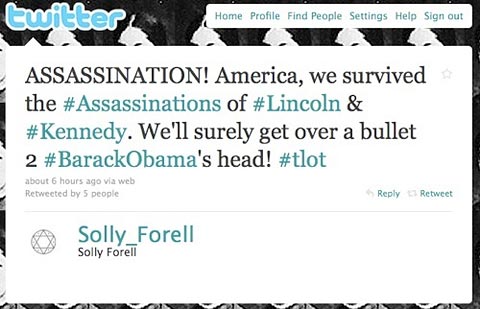 “Attention Whining Liberals: No one wants to hurt the precious #EMPEROR. Stop your crying. The whole lot of you are a modern day joke,” says Solly Forell. Hahahahahaha, says the Secret Service.

Not that the story doesn’t deserve discussion- what in God’s name is the matter with these people?- but:

He was the size of a doorstop, and my sister, true to form, toughed it out. Man-oh-man! Came with a full head of hair and everything.

I can’t figure out which is worse: being forced to buy insurance from those low-life, bloodsucking, private insurance motherfuckers or people who bitch and scream about the bill, but have no idea what’s actually in it and can only spout off submoronic non-sequiturs when asked. Communizms!

The monster-shouters are looking more and more like the idiots they are every time they open their mouths, so I revel in it. Let them look like crazy fools; crazy fools don’t get elected.

@homofascist: Ha! “Uncle Tom” on the thread about Solly Forell. I see what you did there.

Will no one rid us of this meddlesome coon?

@Prommie: Right there, there. First and second amendment torn from the constitution and thrown away. When an American can’t shoot a president in the head when he is wrong or advocate for his assassination, America has surrendered.

@Original Andrew: We’re not beholden to the insurance cartel for four years, so let’s see whether demrats have the balls/votes to put the public option back in before then.

@Tommmcatt Loves The Giant Floating Head: It’s going to be “Maddie”, and you know it.

@Tommmcatt Loves The Giant Floating Head: And Inhofe and DeMint and Corker and Coburn and Foxx and Kyl and Cornyn and Gohmert and Wilson and Issa and Pence and King … wait, gotta catch my breath.

@Tommmcatt Loves The Giant Floating Head: Congratulations! You mentioned having multiple nieces and nephews, but was this her first? Oh, and atypical nickname suggestion: Moxie.

I heard two seconds of Albuquerque Hate Radio this morning: “Yesterday when I woke up, I was living in the land of the free . . . ”

My instructor was watching the FOX “coverage” with great concern. I’m sure there’s gonna be a run on backhoe* rental as guys like him start burying their guns and ammo.

* a machine for trenching and excavation. Not a movie starring a Tiger Woods girlfriend.

@Tommmcatt Loves The Giant Floating Head:
Congrats to all involved.

@redmanlaw: After he comes for the guns, he’s coming for the white women. I saw the movie.

@Dodgerblue: Nothing less than the End of Everything:

“Last night our congress voted to turn the U.S. into a 2nd class world power. They made the same choice as the British parliament following World War II. Parliament chose to renounce leadership of the civilized world, and give a government guaranteed soft, easy life to their constituents. The current administration chose to stop production of the F-22, and are trying to stop production of the C-17, and are looking at reducing numbers of the F-35, next will be reducing our numbers of submarines and aircraft carriers. These are the tools our military needs to project power throughout the world.

“In their defense, Britain had just witnessed an extremely graphic demonstration that a younger, powerful, nation was now ready willing and able to pick up the torch of the enlightenment, rule of law, individual liberty, and western civilization, and carry it forward. The U.S. served as the standard bearer for western civilization for 70 years. Nobody is waiting in the wings to pick up the torch from us!

“Last night, our congress weasels voted to give up on Western Civilization as the dominant culture on earth. So much for liberty and the enlightenment, back to darkness for all us serfs!

“Oh well, I like Chinese food. I guess I better get my kids enrolled in Mandarin classes ASAP.”

@redmanlaw: Hey, what about the V-22 Osprey? Wasn’t the “torch of enlightenment” extinguished when that widow-maker got cancelled?

We haven’t had a white riot in this country in a hundred years. These people are playing with fire. The tards are getting into a genuine frenzy.

They were words of wisdom, from “Risky Business,” when Booger told Tom Cruise, “If you can’t say it, you can’t do it.” The converse is, if you are obsessively repeating it, over and over, and fantasizing about it, and dreaming of it, well, then you are getting pretty close to doing it.

gun t/j
just thinking about something michael moore has asked but we don’t have an answer to yet. the people of canada and israel, just for 2 examples, are armed to the teeth–much more so than usamericans. yet they have a miniscule percentage of people shooting each other accidentally or on purpose than we have in usamerica.
why is this?

@baked:
Our gun laws are pretty harsh, despite our fatness, um, PMs attempts at changing it. Plus we don’t live in utter fear (except in hockey.)

“I wrote to my congress criter a looooonnng time ago and told one that if he voted for this bill, there would be TAR AND FEATHERS in his future!! He did not vote for the bill because I was not the only one to tell him that. The other, I quaintly informed him that I would not sign up for it, I would not pay for it I would pay no extra taxes or subsidies to pay for someone elses, and that if the bill passed it would litteraly make me a criminal. I then asurred him that if I was “criminalized” for nothing, that I would get my moneys worth. I then proceded to explain that I WOULD TAKE UP ARMS IF NECESSARY and that if the REVENUERS came to my door that iwould STACK THEM UP LIKE SANDBAGS!! I ma prooud to say that the congress critiers in MY district listen to the people, they all voted against it. The next Morning, that congressman was at a local restaraunt taking questions about the health care bill. I feel that the time is NIGH, and it may be soon that need our LIBERTY TEETH to protect our freedom. I thank god that I live in TN and our state govt listens to us. They are making law against the health care mandate to protect its citizens from the fed. I suggest you ALL write your congress criters and support that state legislation. Other than that all I can say is ……..BUY MORE AMMO.”

@baked: Economics and ecucation might come into play. When I read about who kills someone else around here, they are usually some fucking low life who has a beef with someone he knows. Rich people can sue each other, middle class people can give someone the cold shoulder and Gangsta McThuggy can and will shoot someone else. Get shorted on a drug deal? Shoot someone. Get denied entrance to a party? Shoot someone. Need some caish? Shoot someone in the course of a robbery, kidnapping or car jacking. Got a fight with the old lady? Shoot her in the grocery store parking lot. This is all from the local paper and my personal knowledge.

Accidents can and do happen to anyone, even trained law enforcement officers and outdoorsmen. The fatal gun accidents I’ve seen reported in the past couple of years all involved unsupervised kids and guns.

“What I look for is moore along the lines of demonizaion of gun people and possably a false flag attack to use as ammo against gun owners. I also believe(this is my theory) that they will commit a false flag attack to prevent or delay the 2010 elections. If we have the 2010 election they will ALL be out and then they will be doing NOTHING, that being what it is, I think they will pull something that will give them at least hte appearance of being able to postpone or negate the elections. I dont believe in burying your guns, if it is time to bury them, it is time to USE THEM, but a wise individual might want ot put away a LIBERTY gun w/ a few provisions and some ammo so that you will at least have the ability to fight if iit should come to that. and on that note…….BUY MORE AMMO.”

@Dodgerblue: The V-22 is in service in ‘Namistan right now. There’s a PJ or National Guard unit with them in ABQ. You’ll see them parked on the tarmac if you ever fly in when they’re home.

This was her fourth, actually.

Oh, lord God, “the enlightenment” yet. Does this person mean “the Enlightenment” or just THEIR enlightenment? Because one was obviously over a long time ago, and the other has yet to begin.

@Tommmcatt Loves The Giant Floating Head: Cue the “All these things are wrong. I looked them up.” rant from Wanda.
PS to flippin: Don’t you feel all insider-y now? ;->

@Mistress Cynica: Sho’ do! I found I knew all the best lines already, though, because they come up so often here.

@redmanlaw: I stand corrected. I thought that the program had been cancelled due to the many accidents and increasing price.