Stinque
Home Latest Comments Log in
If it smells, we’re on it.
Stinque
Lovely day for a Perp Walk.
The Bush Legacy 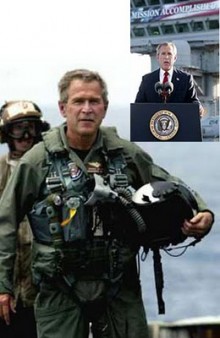 Seven years ago today, President Bush launched the Iraq war. In a televised address to the nation, Bush told the American people “at this hour American and coalition forces are in the early stages of military operations to disarm Iraq, to free its people and to defend the world from grave danger.” Over the last several years, ThinkProgress has been keeping a Timeline of the Iraq War, marking the key events in the U.S. invasion, occupation, and now ongoing withdrawal from the country.

Mission Accomplished, bitchez … except for all the people that keep dying.

It makes perfect sense if you consider the Pro-Life(TM) worldview that life begins when one has round eyes and skin the color of fresh milk.

Almost makes one want to be a tax-resister. Since so much of my taxes pay for killing brown foreigners, or hiring mercenaries to do such.

Mission Accomplished, dudes, like, yeah, they are so happening over there with democracy and the rule of law and all, it’s like, surf’s up in Basra!

How many corpses does it take to get attention from the US American public? 100,000? 1,000,000? A million sounds impressive on the newscast, but of course we don’t count bodies.

It seems clear that US Americans count only their own dead. That count will inevitably increase with the coming cannibal anarchy, but still.

Is there a space on my 2010 census form to register my utter disgust for the purchases my government chooses to charge its credit card with?

What with the Drug War and the War on Terror, there seems little space on earth to escape the War(s). What’s a poor refugee to do?

Oh, I know, perhaps die silently, but only after giving up every bit of productivity a relentlessly capitalist system can squeeze out of the zombie corpse of an otherwise viable human.