Stinque
Home Latest Comments Log in
If it smells, we’re on it.
Stinque
Assholes, they do vex us.
Crazy Talk

This Whole Country is Out of Order 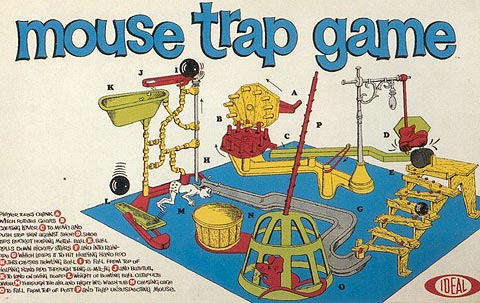 Or something like that. Trust us, understanding Kant is easier.

Either way, the final bill passes both houses as amended, the President signs it into law, and everyone gets a pony.

That would be constitutional scholar Michele Bachmann, exhorting her constituents to just, well, ignore it. Because it won’t be a real law.

Bachmann: We’re Not Going To Obey Health Care Law — ‘We Don’t Have To’ [TPM]

Where are the Death Panels when you really need them?

how about a civics literacy test before being allowed to run for office.

Interesting logic she’s got there, turning a “passing a bill she doesn’t support” into “taxation without representation”. Does that mean I can demand my tax withholding for 2001-2006 – since I certainly didn’t vote for any of the fucktarded shit that went on.

@Tommmcatt Loves The Giant Floating Head: The Tea Party needs a martyr to rally behind.

@Pedonator:
I want Michelle to have to pick sides:

@Capt Howdy: Sadly, the sides don’t seem to be mutually exclusive. I think the snake-handlers are just afraid of losing their privileged status as the crazies-who-must-be-appeased within the GOP.

@Capt Howdy: It’s one of the many weird things about the religious far right — that they say they’re not for big government, but they want government to stand in your bedroom.

@Dodgerblue:
I think its worse. they want government to stand in YOUR bedroom but not theirs.

I just filled out my Census form tonight and had a delicious thought. Wouldn’t it be awesome if Bachman or Beck started blathering about how Barry Hussein Obama is going to use the Census information to round up the Christo-Caucasian-Americans for the internment camps of the socialist Muslim administration, and implore their followers that whatever they do, DO NOT FILL OUT THE CENSUS FORM and DO NOT TALK TO THE CENSUS WORKERS! If enough of them believed it, some red states might lose Congressional seats, not to mention lose out on some of the pork they suck down.

@SanFranLefty: There’s nothing to it this year. I was stranded in far North Queensland during the last Australian census and it took a while to get through it all. Even though I was just bumbling through the rule was even travelers have to complete it to get a snapshot of the country in one time frame.

I have a feeling that not too many red staters in the teabag counties really turn in too many census forms as a general rule. After all, you have to be able to discern which end of the pencil writes, and which one erases…

Bachmann, Beck et al really should be using the technical difficulties avatar for all future communication.