Stinque
Home Latest Comments Log in
If it smells, we’re on it.
Stinque
Assholes, they do vex us.
Ask a Pornographer

Not to Mention the Saddle Sores 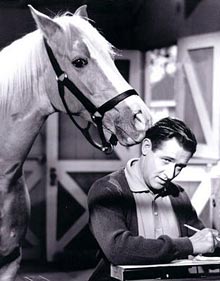 “You see, the Massachusetts Supreme Court, when it started this move toward same-sex marriage, actually defined marriage — now get this — it defined marriage as simply, ‘the establishment of intimacy,'” [McCain primary opponent J.D.] Hayworth said. “Now how dangerous is that? I mean, I don’t mean to be absurd about it, but I guess I can make the point of absurdity with an absurd point — I guess that would mean if you really had affection for your horse, I guess you could marry your horse. It’s just the wrong way to go, and the only way to protect the institution of marriage is with that federal marriage amendment that I support.”

Well, fuck them. We’ll go with Mr. Ed instead.

I never noticed what a cute couple they made.

or a red headed woodpecker

What is it with Republicans and bestiality?

They keep oversharing their not-so-secret desires, of course, of course.

do you think Wilbur may have been related to Catherine the Great?

@Capt Howdy: Why is everyone in those pics 40lbs over weight? Minimum.

@Dodgerblue: Jamie can correct me, but I thought J.D. was a teabagger libertarian, not a teabagger theofascist.

But I guess the rule is that government should stay out of our lives, not yours.

I don’t what he’s complaining about. A change like that means his parents could finally get married.

@nojo: I don’t recall him being a theocrat before, but he’s jumping on that bandwagon now. He’s running a minute long radio ad talking about what a great “Christian” he is.

I’ve never understood the “next we’ll be able to marry animals” jump in the gay marriage debate: wouldn’t the next logical (for suitably small values of “logic”) step be allowing polygamy? After all, all the participants in a polyamorous relationship are at least consenting adults. Are they worried about the Mormons getting excited or something?

Either that, or it’s just framing the debate in terms they prefer, making a connection to an *illegal* sex act to try to imply that gay sex should be illegal as well.

Well, there’s the third possibility too. But surely there can’t be *that* many horse-fuckers in the GOP, right?

It’s a fairly standard-issue dehumanization technique, akin to ranting that “the Jews own all the banks,” etc. It’s designed to strike at the surface level, where most people’s thoughts dwell, and provoke a negative, visceral ‘in-group vs. out-group’ reaction.

Here is Reason #4,358 why the so-called “journalists” can suck my balls: No one ever, ever, ever asks logical, follow up questions, such as 1) there can never be a “marriage” with an animal because they can’t sign a legal document, let alone consent, so what’s your point? Or 2) how precisely does limiting marriage to heteroseckshals protect their marriages from hummuhseksahls? Please answer with specifics and examples, thank you.

Oh no, what we get instead is national politics on a third-grade level.

Eat shit and die, J.D. Hayworth & “Orlando radio station” (though I guess that goes without saying.)

I should also add that all the straight guys that I’ve known who’re actually confident in themselves and their sexuality couldn’t care less who’s fucking who or who marries who. Gayness doesn’t provoke them or gross them out, they just don’t care. It’s not their thing, in the same way that straightness just isn’t for me.

At this point, when some jackhole starts screaming about the homos, someone needs to ask who they’re having it off with on the DL.

It’s easy to forget how serious the result of that kind of speech can be.

@Original Andrew:
It’s not just that. Based on GOPer not so secret shames, it seems JD apparently beat off to Mr Ed.

I suspect it’s J.D. who’s wearing the saddle when he hires a call-boy to play cowboy.

Or, as one of the TPM commenters on an earlier story put it:

@al2o3cr: OK, if Weissman’s Law is extensible, what does it say about the guys who are all up in arms about people have sex with horses?

Well, using analytic continuation to extend the relation into the equine domain, we determine that J.D. Hayworth is a horse fucker.

But is J.D. a top or a bottom? I vote for a naughty bottom.

OK, Wikipedia sucks. I should NOT have just read five different pages about weird people fucking animals. But, guess who ELSE apparently is into the zoophilia action?

Hint: he’s a GOP operative, who by all standards should be sitting his ass in jail for treason.

OK, not much of a clue: Scooter Libby

Withers or not he is a bottom is neighther here nor there, IMHO.

@al2o3cr: “The man called out to the others that the deer was still warm.

@al2o3cr: Interestingly, in Uganda, while they vilify gay men and call for their death they also argue in favor of polygamy – which is promoted as a traditional African institution. So marriage is between one man and one woman when it isn’t between one man and several women.

Personally I wish everyone would STFU about it. I’m sick of it.

“Hitler’s “final solution” of genocide of all European Jews began by shaping the beliefs of school children through the reading of assigned texts in which Jews are portrayed in a series of increasingly negative scenarios. At the end of these lessons in civics or geography, we see the “reasonable” discriminatory actions that Germans should take toward Jews.”
@tommie’s linque

let’s just pause for a moment to consider the fucking POPE , god’s BFF?, was in that class. and he liked homoseckshels just as much.
jesus is spinning.

and the last journalist i’ve seen is helen.