Stinque
Home Latest Comments Log in
If it smells, we’re on it.
Stinque
Assholes, they do vex us.
Weekend Sedition

Please Do Not Beat Off To This Photo 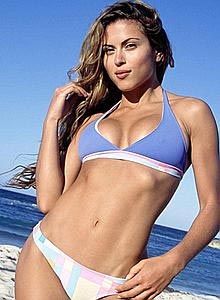 A Manhattan woman whose picture was used as a sexual aid in the hit movie “Couples Retreat” has filed a $10 million lawsuit over her inspiring — and unwitting — appearance in the Vince Vaughn flick.

Irina Krupnik “only learned of defendants’ lascivious use of her photo in the film” after it was released in theaters — and was horrified to discover it was being used as a “masturbatory prop” for a character played by Jon Favreau, the makeup artist says in papers filed in Manhattan Supreme Court.

Remember, “Couples Retreat” is a work of fiction. Nobody would ever use Ms. Krupnik’s image as whacking material in real life.

Woman sues over unwitting appearance in ‘Couples Retreat’ [NY Post, via Above the Law]

Krupnik was not amused to find herself being used for Favreau’s “much older, desiccated” character to “pleasure himself,” the suit says…

So, if he had been young and in good form, no harm? I smell mesomorphism, Ms. Krupnik!

What standing would Favreau’s “much older, desiccated” character have if he were unable to achieve a rip snorter with the assistance of Krupnik’s image? Since her suit assumes a potency of her image that redounds to a warranty if not an establishment of obligation, does not Favreau’s “much older, desiccated” character have grounds to sue under breach of contract?

General release? Too fucking bad. Still, I bet she and her mouthpiece get nuisance money to go away.

I prefer the gal in the Audi rally video.

she’d never imagined it would be used in a “quasi-pornographic context.”

Um, what? Sure darlin’, the come-hither look and your tits practically hanging out would *never* be used in that context.

all spilled sperm now property of the plaintiff

Related, but only in the sense that both involve cocks:

Stunning to see the “hard news” reporters turn out for their comedy cameos – I LOL’d.

BREAKING HARD/FILE UNDER “IS HELL READYING A ROOM?”:

@redmanlaw: My thoughts exactly – a general release will stand. And I have two words for Ms. Krupnik … refund gap.

@SanFranLefty: “Stomach pains” = the Devil’s spawn is trying to get out.

@ManchuCandidate: You mean the baby he had for lunch?

@SanFranLefty: Sigourney Weaver’s college roommate is the head of the enviro organization I work for — let’s call her “Frances.” Sigourney once said that she modeled the character of the Alien after Frances. We take no shit from humans who pollute.

@Promnight:
I think so too. I actually think he is a spirit guide.
@Dodgerblue:
those eyes are a blue million miles – capt beefheart

Ghost wanna come say hi? Go kissy kiss? (I do allow certain dogs to deep throat me. Like if they have four legs and a nose)

Mozart go disco. Why did no one tell me Prague was ruined? I was just offered 10 mins of bliss by an African dude on Wenceslas Square. I’m now drinking my way through the mini bar.

@Benedick Gabor: An African queen? If he was sporting a credit card issued to Nabisco, see if you can recover some of the finery purchased in my name in Johannesburg.

Prague was already going to the dogs tourists when I visited in 95, I can only imagine how it is now. Still some gorgeous architecture.

@Dodgerblue: Sigourney is the bomb, bad fucking ass, and I haven’t even managed to watch any of the Alien movies in whole without falling asleep. When folks have been incredibly generous to me in naming my celebrity doppelganger, it’s always been Sigourney, Geena Davis, or Andie MacDowell. I fucking wish. Tall and dark hair, but if that’s all it takes to be compared to those three, okay.

ADD: Your boss scares me. And it has nothing to do with Alien. I say that in good way. Balls out women rock.

@Nabisco: I am having a terrible time here in the third world. I’m afraid to leave the hotel. It’s only going to be more of the same.

I just had a revelation: sight-seeing is shopping. It’s the same action as going to a mall. Who gives a fuck who painted what when? They’re all dead.

Wherever you go the locals will despise you.

There is no such thing as a good exchange rate.

Because you know how to make decent coffee does not mean you’re morally superior to me.

Putting up with Americans is your fucking job. Deal with it.

I saw a putrid production of Cosi last night. Why hasn’t God smited all dramaturgs dead? What is he waiting for? Residuals?

We should have nuked Europe when we had the chance.

@Benedick Gabor:
but he doesnt like baby talk.
he will ignore you if you do that.
this was the better mug shot

@Capt Howdy: What a lovely shot.