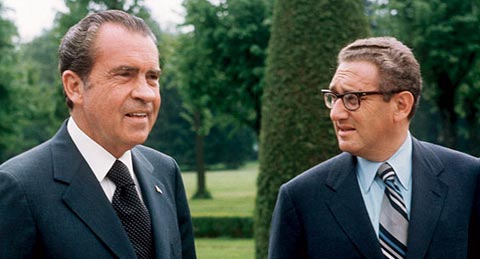 But don’t get your hopes up:

A hospital official says former U.S. Secretary of State Henry Kissinger is recovering after being hospitalized in the South Korean capital with stomach pains.

And there is no doubt this man is a war criminal.

This may not be the Big One, but Tom Lehrer has had the epitaph ready for years: “Irony died the day they gave Kissinger the Peace Prize.”

Damn, I was hoping it was a North Korean hospital.

Damn, all these phone calls to hell for interviews with Satan are getting expensive. Lemme see how close Kissinger is to getting on the train south before I drop the coin on a call to the dark one.

@Dodgerblue: Forced to watch Kim Jong-Il directed home videos on endless loop would be a fitting circle of hell for Herr Henry.

My stepdaughter is studying international relations at Penn State, and she has been home this week on “spring” break, and I looked at some of the things she is reading, preparing for an exam next week. They were these academic papers, which tried to actually produce mathematical models to prove that an autocratic government is more likely to engage in war than a democratic government, it struck me, this is the cold war, there was this whole academic industry producing this psuedo-scientific rationale for the paranoia, trying to produce “scientific” backup for the proposition that we had to arm ourselves to the teeth and put our nukes on a hair-trigger and fight every proxy war we could, because it was mathematically provable that the autocratic soviets were likely to attack us if they wever sensed weakness.

This was the world of Kissinger, and LeMay, and MacNamara, and all the rest of the cold warriors, they lived in this bubble in which their beligerence was truly believed by them to be absolutely necessary, or else we would be destroyed.

They lived in a time when society was insane, had an insane, paranoid fear, of communism, and you know, I cannot hate Kissinger too much. Nixon, and Kissinger, did more to defuse tensions between the US and China and the USSR than any administration before them, Reagan ramped it all back up.

There were many crimes, Chile, Cambodia, yes, all terrible shit.

But, you study enough history, and sociology, and you get old enough to see, with your own eyes, your own society go into a period of mass hysteria, genuine societal insanity, and right now, we are deep on one of those periods, you just have to develop a broader view, of these people, products of their times, immersed in a society-wide insanity.

All I will say at the going of Kissinger is good riddance, I cannot rejoice, though. Just a sad deluded fool, like so many brilliant people, it sometimes seems, the smarter you are, the more liable you are to convincing yourself of shit that just ain’t so.

@nojo: Irony was reborn, like a phoenix or perhaps a unicorn, the day they gave Obama the Peace Prize.

@Nabisco: As long as he has to watch those videos with a glowing red fire-poker up his ass, I guess I’m good with that.

@Promnight: I don’t buy it. Those cold warriors may have felt a general sense of dread, but if so it was about losing hegemony, dominance, economic entitlement. It wasn’t a true worry that the evil Soviets would set fire to the world. These fucks were ready to do that themselves, at the flimsiest pretense.

I’m just disappointed that Kissinger is still alive. One can only hope this is the end. The best thing that can be said about him is that perhaps he didn’t kill as many people as Bush and Cheney. Or Hitler.

@Promnight: “a time when society was insane”? You write as if somehow society is no longer insane. It was pretty insane then, but I defy you to prove that it was more insane than now.

@Promnight: “Richard Nixon looks like a flaming liberal today, compared to a golem like George Bush. Indeed. Where is Richard Nixon now that we finally need him?”

This by the same guy who also said, about Nixon, I couldn’t imagine him laughing at anything except maybe a paraplegic who wanted to vote Democratic but couldn’t quite reach the lever on the voting machine.

@karen marie: I truly think it’s more insane now. I went through school in the immediate aftermath of Kissinger’s war crimes (among others’). But still I learned about the Constitution and the Bill of Rights, and the theory of the rule of law not men, etc.

Now, the people most rabidly upset about violations of the Constitution seem to be the Teabaggers, who must have read a very different piece of toilet paper than the one I studied in 1970’s-era civics class.

Meanwhile, so-called liberals defend the continuous violation of civil rights that is the Obama administration in the name of political pragmatism.

It’s enough to make one vomit, if only one had any bile left with which to dry-heave.

THIS, if nothing else, proves that our system government society is completely unhinged from any semblance of rule of law or adherence to justice and due process.

The cannibal anarchy is already here. Democrats will not save you; rather, they will eat your face and claw out your testicles and ovaries while telling you that next year, next election cycle, things will Change™.

@Pedonator: A coupla things that are making me Sad Panda ™:
Yemen could possibly be my next playground, after Shangri-la; and,
Currently in Shangri-la, I’m troubled by my attempts to shine a light on extra-judicial shenanigans by the lotus eaters who very adeptly point to our own GWOT and say “live in glass houses much, yanqui?”

And people wonder why I spend most of my weekends holed up in my apt. watching “Weeds”.

@Nabisco: If you go to Yemen, keep an eye out for Predators. And don’t piss off any Xe-nians.

@Pedonator: We were on the same school bus.

The Bush administration has drawn a big fat line through American history. Things were still reasonable back in the ’90s. I think of that decade as being much like the ’70s but with better employment and relatively cheap gas ($1.05/gallon in 1990).

I had myself believing that after the November 2008 election things would go back to the normal that I remember from before the mental patients from the GOP got the keys to the mansion and trashed the place. That it didn’t leaves me feeling like a modern Rip Van Winkle — I don’t recognize anybody or anything.

The longer I live the less I understand and the less I’m sure I even think it’s really all that.

@karen marie: I’m not so sure things were really that reasonable back in the ’90s. Especially with cheap gas. That’s a huge part of the problem, then or now. Gas should really cost at least 10 times what it does now, if we weren’t subsidizing it (socialism!) by maintaining a huge “defense” industry and providing countless other protectionist schemes for private interests who know how to buy congresscritters. Not to go all Ron Paul on you but, even if I were pro-capitalism, this is far from the free market principles of someone like Adam Smith.

But the Bush years certainly did kick it up a notch or five. The transparent, flagrant, overt violations of the law by our own government, with little if any attempt to sew a fig-leaf over it, and much worse the complete capitulation of 90% of the US American population to such shenanigans, brings home the pragmatic golden rule (he who has the gold makes the rules).

@karen marie: before the mental patients from the GOP got the keys to the mansion and trashed the place

What I hope people are starting to realize: it doesn’t do any good to blame the GOP. The deliberate degradation, no, rape of the Constitution and Bill of Rights, of the idea of having a middle class, yea, of wholesome food and softball games with a picnic lunch and spending quality time with your fambly in a patch of relatively unspoiled nature, all of this, the destruction of it, has been a thoroughly bipartisan effort.

The last thing I remember is St. Jimmy sending the choppers into the desert to appease Koppel. It’s all been a blur after that.

Am I wrong in thinking that Kissinger made a deal with the N Vietnamese that if they would refuse any peace offer from the US and keep the war going through the elections that Nixon would give them better terms? And then, of course, once he was elected the war continued for years and more Americans lost their lives under him than had died to that point? Hitchens, you should pardon the expression, published his account of the transaction in London to dare Kissinger to sue him for libel. He didn’t, of course.

i hate that i have to write this again.

“this is a court of law, young man, not a court of justice”
—-oliver wendell holmes, jr.

on a lighter note, benedick GABOR just made me spit coffee.

@Pedonator: Yeah, no, you’re right. I was looking at it more from the turtle’s point of view, which is what I have tried to be in my life. Until the Shrub took office, I at least felt safe. It’s not jihadist terrorists that are making me afraid, it’s my fellow countrypeople. And for that I do blame the GOP.