The Vapor of Record 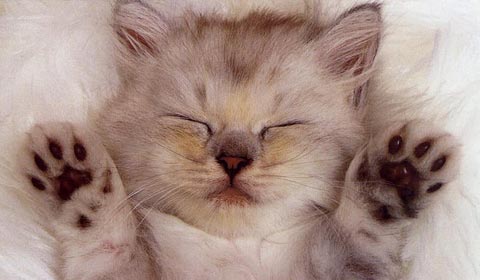 How long can you keep from strangling this cute kitten while reading a Tom Friedman column? Let’s find out!

An election does not a democracy make — and Iraq’s politicians still have yet to prove that they are up to governing, nation-building and both establishing and abiding by the rule of law.

So do America’s politicians, and they don’t even have a foreign invasion for an excuse.

The only way Al Qaeda, Baathism and violent Islamism will truly be defeated is when Arabs and Muslims themselves — not us — show they are willing to fight and die for a more democratic, tolerant and progressive future.

And how’s Kitty doing? Don’t lie, we saw you flinch.

Comments have been disabled. I guess they got too many FU TF.

I would ask if this person has no shame. But clearly he doesn’t. Only a vast bubbling reservoir of warm self-satisfaction percolating beneath his thick skin.

Stumbled across this – perhaps *this* is what the teabaggers are so pissed about:

The more I read TF, the more I laugh and makes reading stuff like this so much better:

Supposedly it might emerge from bankruptcy, but not exactly smart with the commercial real estate problems on the immediate horizon.

I love that neocons are trotting this loser out again.

Speaking of teh kittehs, for no other reason than more feline cuteness (which I promise this will not be a regular thing, or else Nojo will banish me), I present to you 119 ways to store and organize your cats

Awwww, kitteh!! I skipped the text part. I learned the hard way to stop reading when I see the words “Tom Friedman.”

@SanFranLefty: awwww. I miss my kitteh nearly as much as my biscuits…

@SanFranLefty: Squee! The tabby cozying up to the radiator is my absolute favorite.

The Medium Lobster has a hilarious post on this, so hilarious I’m choking on my guffaws.

And that would make the United States not an enormous force for good in the world but a monster of world-historical proportions, our leaders gore-guzzling psychopaths who wipe the blood from their chins just long enough to collect the occasional Nobel Prize, and ourselves their numbed, acquiescent followers.

@Pedonator: Now you have made me love the medium lobster; I am so excited I went to the trouble of re-setting my password, which my work computer had lost because it had to be fumigated earlier this work for swine flu or some such virus.

Friedman is so silly. This is all coded racism, of course, essentially saying that it does not matter how many muslims we must kill in order to civilize them, the goal is worth it because as they stand, they are dangerous savages.

@Dodgerblue: Are you at all aquainted with Cute Overload’s Cats ‘n’ Racks category? You’re welcome!

@flippin eck: Thank you. This is one of the finest uses of the internet I’ve ever seen.

Why can’t someone dip Tom Friedman in honey, roll him in bacon grease, and then toss him out of a moving van into a starving polar bear habitat? At least then his carcass might do some good.