Stinque
Home Latest Comments Log in
If it smells, we’re on it.
Stinque
This is America.
Good Luck With That

But Can It Buy You a Drink? 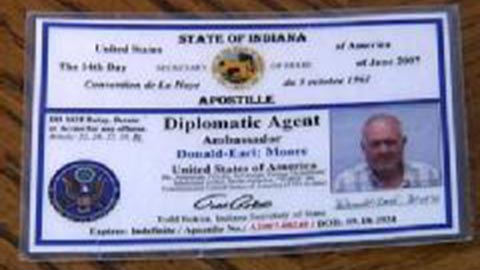 Just because you lost the Super Bowl is no reason to get all pissy about it:

Fed up and fired up, an increasing number of Indiana residents who have lost confidence in the government are going to extreme measures to claim they are “sovereign citizens.”

By doing so, residents contend that they no longer have to pay taxes, claiming their homes as embassies and using identification cards that show them as diplomats…

“It gives me diplomatic immunity,” [Donald] Moore said, referring to the ID card. “The way I understand it, the federal government is incorporated, and all the states are incorporated. This takes me out of the corporation.”

Fools. Everyone knows that in America the only way to escape paying taxes is to be filthy rich.

@Capt Howdy: Even busier. But we’ll let this one breathe a bit before running the next.

@nojo:
on the edge of my seat

seriously, who does a better Reagan than Jim Carrey?

you know, if they would use a pic of Carrey in that makeup I would campaign for Reagan on the 50 dollar bill.

Hey, have you all noticed we haven’t seen any of the Lady Stinquers today? What, are they working or something? Sheesh.

@redmanlaw: Which is literally what happened: With Hartman, um, unavailable, they went to the bench.

Are they are that diplomats only (AFAIK) enjoy diplomatic immunity while in *other* countries? And that while diplomats can’t be charged with crimes, they can still (again, AFAIK) be told to GTFO the country?

I’m all for teabaggers declaring themselves non-citizens – but what country will take them? :)

Wait till they have to pay tolls for water, power, gas, and roads.

But I guess they never really thought that out before.

The former state of Peteroria and its ruler Peter Griffin, would be proud.

@redmanlaw:
I dont know. Carrey was the star of that thing. IMO.

Gentlemen, I hate to have to say this but it seems like the Vatican has shown us what a real gay scandal looks like.

Quote of the week? Don’t touch his balls.

Now if you’ll excuse me, I have go and dance about the garden.

@Capt Howdy:
well
him the guy who does Bubba

@Benedick:
OMFG
would that be what nojo is holding back?

@Capt Howdy: No, but it looks like Chainsaw may have the material for a double-hitter today…

Mine’s closer to home, and about seven minutes away.

@Benedick: Sure, blame the Nigerians. And, I speak no Italian, but could the name “Chigi Palace” possibly translate to “palace where we fuck our brains out until we get caught”?

@Capt Howdy: Saw it on MSNBC last night. Not impressed.

What? Rent-a-choir-boy and you’re not impressed? 5 diapers! This is the Vatican, man!

@Tommmcatt Say Relax:
no no
I suspect he is impressed with the vatican action.
he was referring to Jim Carrey as Reagan. who I loved and want to have his children.

Several spry rentboys a week! Pretty impressive for a 63-year-old. I give it 7 1/2 diapers, with deductions for no underage boys (yet) and no overwhelming hypocrisy as I’m assuming “papal gentleman” is not actually a religious office.

@Benedick: I love these instructions:

take out the [inaudible], swallow the Viagra, and adelante

Let’s have a contest to fill in the [inaudible]!

@Pedonator: Off the top of my head:

@Benedick: How many priests does it take to screw in an altar boy?

You know me. Too scattered to actually go back and look…

@redmanlaw: Do they say “pinche” in your part of town, e.g. “Hey, you drive like a pinche vieja!” (fucking old lady).

@Dodgerblue: As in “pinche cabron (fucking goat) motherfucker”? Why, yes.

@redmanlaw: How do you tell whether “pinche” or “chingada” is the proper usage?

There’s actually a shop called Pinche Tacos here in the LA. Never eaten there, though.

@Dodgerblue: You just know from exp. and context. I’m sure Lefty knows the actual grammatical rule.

@Tommmcatt Say Relax: As in “yo quiero some pinche tacos”? Where is it?

We should get hammered and go eat about a thousand of them.

OK, if Papa Nazi delivers his next sermon to the faithful while getting jack-hammered from behind, we’ll have no choice but to award 10 solid-gold diapers.

Jeebus, that would even blow the diapers outta the water. What’s above the diapers?

@Tommmcatt Say Relax: That’s a plan. We need to stage an intervention and get you-know-who liberated from her cubicle downtown. I’ll wave a $20 bill — that will divert all the lawyers — you rush in and grab her.

Sounds good, but probably it will only take a five.

@Original Andrew: I’ve changed a lot of diapers. When the shit gets above the diaper, you need to take the kid through the carwash.

Well, Democrats may be acting like Republicans (and if you want to see what happens, check out the 300,000 graves in Iraq, and the state of the economy), but republicans these days are acting like mental patients, no, they ARE mental patients, or should be, so really, the DLC democrats are just drifting over to fill the sane conservative vaccuum. Genuine traditional democrat liberals, you know, the people who represent the mainstream in every other developed nation in the world, are left out to dry and represented as the equally insane counterparts of the truly insane conservatives by the media, which is now completely controlled by the corporate oligarchy. I think thats about it.

@Dodgerblue: Just yell “Free scotch!” and step out of the way of the stampede.

@Dodgerblue: @redmanlaw: I learn so much here. I can’t wait to use “No me toques las pelotas” in conversation.

Pinche tacos! Me encanta! And get CassandraSaid out of that damn legal dungeon!

Sorry boys that the estrogen level is low lately – flippin and Cynica can hold down the fort – I’m still pretending I’m on vacation – now I’m doing a SF vacation – today (Thursday) was ferry ride to Sausalito, Friday is Sonoma, Saturday is the beach.

Back to the reality and the computer on Monday.

And redmanlaw and Dodgerblue, w/r/t to chingar v. pinchar, I always think of chingar and its derivatives as more of the verb/adverb role, and pinchar – although it has a verb form – as an adjective. Thoughts?