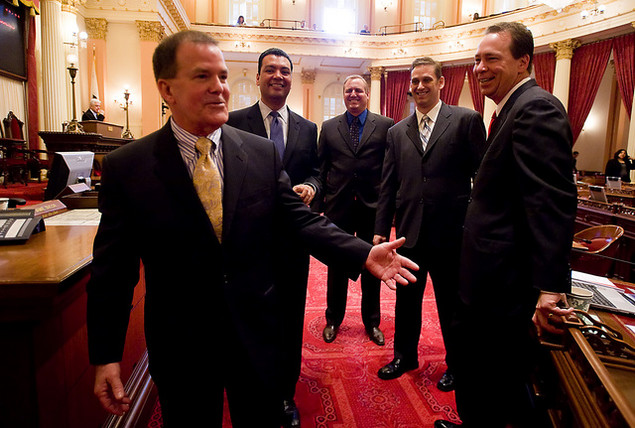 California Republican State Senatory Roy Ashburn built his career raging against homosexuals, joining the GOP chorus of hate, fear and genocidal rage that the RNC had cultivated for decades.

That is, when Ashburn wasn’t driving around shitfaced and cruising gay bars looking for men who would have sex with a hypocritical fascistic asswipe like him.

The family values father of four and husband was apparently taking a break from condemning godless sodomy by pursuing some godless sodomy for himself, arrested with an as yet unnamed man Ashburn apparently scooped at a tavern for homosexuals in Sacramento.

Sacramento cops collared Ashburn after he was observed driving a car and careening all over the road at 2 am on March 3. Police did not speculate that Ashburn was distracted by the guy in the car with him biting his dick or if Ashburn was driving with his ass in the air or attempting sodomy on his boy toy while driving.

Ashford’s career as a gay hate demagogue is apparently over. But, what say you, could he make a comeback as a gay stunt driver, making sport-porn videos of himself and his boyfriends having sex while driving around Sacramento shitfaced?

He was simply doing it for research purposes.

Waiting for the press conference with the long-suffering wife by his side. And his hunky young male staffers behind him.

Oh, and Amazon is trying to hawk a video featuring lesbians in a NSFW pose called “No Toys, No Boys Vol. 2”. The video is called that, not the pose, that is. Boobies.

@Tommmcatt Say Relax: Yes, I am getting that and Potty Power, apparently a field guide for GOP pederasts who seek out little kids to shit on their faces.

@ManchuCandidate:
no he was saving soles. one dick at a time.

@Tommmcatt Say Relax:
I’m seeing it too. FCS’ always seem to bring the amazon pron (not that I’m complaining. Actually, I should be because it is really hard to really care about sex with a cathater in my dick.)

Update: I’m moving around. Hurts to get up. I’ve had a little bit of solid food and my digestive system is working once again (but very very slowly.) I’m going to be discharged tomorrow to the loving embrace of my parents who insisted that they take care of me for a few days. Great.

Trying not to watch too much boob tube because of the food ads. I’m craving steak and ribs…

Didn’t say much as I suffered complications (stomach wouldn’t) open so I had to get my stomach pumped. It was not pleasant to shove in and not pleasant to pull out. Got gawked at by a family of dumbasses as I walked around with said tube up my nose at the ward (I grinned eviliy at them and told’em ¨Don’t get sick!” then they ran away. Being gawked at really pissed me off.)

@ManchuCandidate: Are you allowed to drink beer? Because with a catheter in, you could save a lot of time by not having to get up to go to the john.

@Dodgerblue:
Not yet. I don’t know what I’m allowed to drink.

To be honest, I think I’d rather be inconvenienced and go to the bathroom to piss.

Also had the weirdest dreams while they pumped me full of morphine when they removed the epidural on Sun Night.

When the pain nurse showed up and I told her all that, I was taken immediately off morphine.

Hay, I’m glad you’re up and about. Now the fun begins! Try not to play too much hockey.

@ManchuCandidate: Was she singing “And I know that this shot/could be my last”?

@ManchuCandidate: Glad you’re about to leave.

Your dream, BTW, is obviously political:

1st night: This is a dream about McCain and how he keeps coming back up.

2nd night: You dreamt you joined the Republican party.

3rd night: You couldn’t leave the Republican party and Michael Steele was in the building.

It’s touching that you should have so internalized our anxieties that you are dreaming about the American political scene way up there in the frozen North. Dress warm. Man hug.

Oh no!!! Manager says it was Latin night at Faces and she didn’t see him. This has got to be true. I can’t disappoint the dogs.

Best of luck with the parents.