Stinque
Home Latest Comments Log in
If it smells, we’re on it.
Stinque
Assholes, they do vex us.
Lie Back and Think of England

Does Anybody Really Know What Decade It Is? 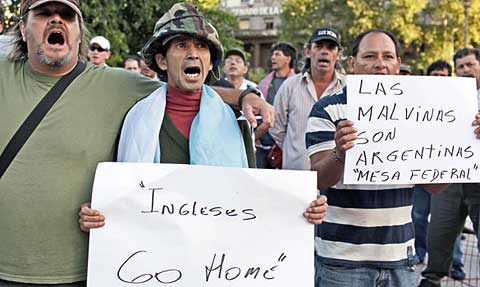 You know that moment when you’re just waking up, but your mind hasn’t yet plugged into the Matrix of the reality chosen for us by our Robot Overlords?

Washington refused to endorse British claims to sovereignty over the Falkland Islands yesterday as the diplomatic row over oil drilling in the South Atlantic intensified in London, Buenos Aires and at the UN.

We had one of those today.

@ManchuCandidate: There’s this rad new cable channel that plays music videos all day. Have you heard of it?

Where are the teabags? I know this crowd wouldn’t survive for five minutes at a real teabagger rally but the similarities in style are scary. Is there a checklist for organizing a conservative protest? Scruffy people with mouths wide open at all times and holding the most juvenile signs ever.

@Benedick: I understand the British Navy wears woolen long johns in cold weather because so many sailors were horribly burned when their polypropelene underwear melted to their skin in the Exocet missile attacks in the Falklands War. I read that is also the case for the US American military also.

@Dave H: The guy with the hat, grey goatee and the green T-shirt could pass for one of our own fucktards.

Gordon Brown’s wet dream would be to have Argentina invade the Falklands again, so he could get all Maggie on their asses — boosting his own popularity (maybe) and possibly getting away with possibly winning the general election.

@nojo: I think in his case that would be MuchMusic.

Speaking of things in the wrong decade:

Just for spite, Reid should float a proposal making tax cuts and increases in military spending require 70 votes. Any bets on how many Repukes would sign on?

@rptrcub: Oh, and 24-hour news will never work. Besides, who in their right mind would pay for television?

@nojo:
Sorry I didn’t reply sooner, but I was using my super powerful Commodore 64. Frogger Rulz!

@ManchuCandidate: How’s that working for you? I keep shoving Pink Floyd tapes into my Timex T1000, but nothing happens.

@rptrcub: Didn’t Much Music become Fuse – home of metal goddess Mistress Juliya (whose photo in a ripped “Revolver” magazine shirt gazes at me from my monitor stand) – at least in the US America? I used to love her metal show “Uranium”, which turned me on to Lamb of God and Mastodon, although her music/relationship show “Slave to the Metal” was unintentionally silly. Now they have her cleaned up and toned down hosting a really mild top ten video show. Sad, but people gotta eat and pay the rent.

@nojo: I thought at one time that people would not pay money to rent movies.

ADD: We have Mrs RML’s 8-track player out in the garage with some tapes. We should fire that baby up. I got her a turntable for Christmas that can burn audio files from her LPs to her iSmug laptop.

@nojo:
Cool so far. I’m not liking waiting 20 minutes to load a game though.

So have we lost Mellbell for good now? You just wait, chickie, cuz one day you’ll be busting out the earhorn and cane too, riffing on blogs, iPods, and representative democracy.

So is Lefty in the air now?

@Tommmcatt Say Relax: And in geek news, YouTube inadvertently dumped the RickRoll video, then quickly reposted it when their karma exploded.

“OOOOOHHH! I didn’t wanna do it but I got too lonely!
I hadda call you up in the middle of the ni-hi-hight!
I know it’s awful hard to try and make-a love long distance
(Hah! Hah! Hah!)
But I really needed stimulation
even though it was only my imagination!

Oh, the TASTE we had back then!

@mellbell: I was busy listening to “Not One of Us” and “Games Without Frontiers” etc while everyone else was all about Styx, Journey and Foreigner. That, and with Reagan being president after kicking Carter’s ass, was a pretty awful time. Now it looks like the good old days.

@redmanlaw: I have the melty face LP, actually. Its his moodiness I love.

@redmanlaw: Stockhausen. When the going gets weird, the weird turn pro.

@rptrcub: No Self Control, I Don’t Remember, all great songs. Listening to No Self Control now with a non-sucky Phil Collins on drums (actually before he released his first solo record) that makes me want to play drums myself when I get home. Gotta finish writing this conference presentation first.

The Falklands war? I seem to remember The Clash, Combat Rock, I seem to remember Graham Parker, am I conflating memories, I remember the early 80s as a time of exciting new music, punk transforming, the first rockabilly revival, Robert Gordon, anyone? PIL, it wasn’t that bad.

@redmanlaw: Reagan kicked no ass, it was as close as Bush-Gore. Reagan got so jealous of Thatcher, though, that he invaded that medical school in the caribean.

@Benedick: Our Lady of the Poll Tax, an idea so vile it is beneath even the American Conservative movement. And that is saying something.

@Promnight: Sorry, but Ronald Fucking Deranged Drooling Bag of Stupid Dogshit Reagan had 489 electoral votes to Carter’s 49. They called it in about a half hour. I remember it very clearly because we got deli sandwiches and a bunch of Dos Equis to watch the returns and it was fucking over right away. I’ve been pissed off since then.

@redmanlaw: The one thing Saint Reagan did good, that I remember, is the Convention Against Torture. And we all know how great that turned out.

So why is Argentina itching about the Falklands now? Could there possibly be trouble at home?

@redmanlaw: Yeah, but I seem to remember the actual votes were much closer than the electoral college. Like you, I have been pissed ever since, too, that fucker Reagan created this insane GOP worldview.

@redmanlaw: You know, there never was a golden age, liberals always were fucked. In my life, they killed Kennedy, they killed his brother when it looked like he might be elected, they killed King when it looked like he might be raising a real force, they perpetrated the Tonkin Gulf incident, a complete fraud, to get us into Vietnam, they conducted illegal undercover wars in how many countries? They conducted a sham “impeachment” of Clinton, really an attempt at a legislative coup. Bush stole the 2000 election, and had the theft ratified by the supreme court majority with how many members appointed by his father?

I think this is a show-democracy. They let a democrat get elected every now and then when their theivery has caused a recession, so they can blame it on the democrat.

Look, it was all reported, when Jack Welsh burst into the NBC newsroom on election night in 2000, and yelled “who do I have to fire to get this network to call this for Bush.”

Reagan, Bush, Cheney, its all the oil industry and the defense industry, the combined military-industrial-energy complex, they completely control it all.

@Promnight: I think this is a show-democracy.

You think? What we have is an oligarchy, one that is happy to maintain the illusion of a “middle-class”, for exactly as long as they are able to skim profits from consumerism. But what they really yearn for is a return to feudalism. Which is coming up.

Add Jimmy’s and John’s votes (your comparative mileage may vary), and you get a gap of 3 million-ish. Barry won by 10 million and 7 points.

@Promnight: think this is a show-democracy.

As I’ve said before, the American people get the government they deserve. I will grant you every last point about who runs what, but they couldn’t fool the people unless the people were desperate to be fooled. We have met the conspirators, and they is us.

@nojo: We have met the conspirators, and they is us.

That is the truly sad part.

@Pedonator: We may not be Bozos, but we’re stuck in their bus.

@nojo: I’se looking at electoral votes, which is the tale of the tape for purposes of stealing democrasy.

@redmanlaw: True enough, and the electoral vote was the only thing I was following in 2008.

But if you’re taking a read of the public pulse, the electoral vote mispresents the reality. Ronnie’s popularity wasn’t anywhere near his EV count; that’s just how we play the game here.

And to correct Prommie: Al won the popular vote in 2000.

And look where that would have got us: Vice President Lieberman.

On the plus side, perhaps we wouldn’t have killed hundreds of thousands of people in Iraq and Afghanistan (and Pakistan).

Let me check under the White House sofa cushions for weapons of mass destruction while a horde of White House reporters correspondents LOL!

@Pedonator: For me, that episode says everything about our culture. I still find it hard to believe the pure evil exposed at that fucking White House Correspondents dinner, to the vacuous adoration of our intrepid journalist representatives.

That event represents the ultimate capitulation of the “fourth estate” to the executive branch.